Two dream cars combining luxury, intelligence and sportiness
Mercedes-Benz is adding to its exceptional S-Class portfolio with the latest Coupé and Cabriolet. The two-door models feature extensive elements from the latest sedan, including intelligent driving assistance systems (optional in Levant), Widescreen Cockpit, integrated ENERGIZING comfort control (available as standard in GCC and optional in Levant) and the latest infotainment generation.

The enhanced design exudes greater sportiness that boasts the models’ high technical expertise. Both the S 560 Coupé and S 560 Cabriolet feature front aprons with chrome-plated front splitter and voluminous air inlets. The dynamic looks are enhanced by restyled side skirts and chrome-plated twin tailpipe trims with a V12 look.

The AMG Line - available for the S 560 models as standard in GCC and optional for Levant - is also made more dynamic with new front and rear aprons. Especially striking at the front end are the large three-dimensional air inlets, which each include two chrome-plated fins. 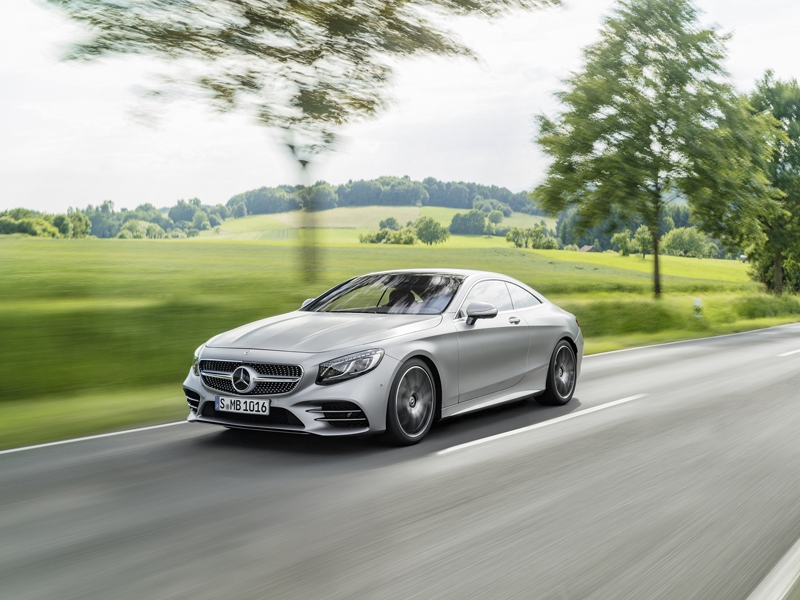 A fresh interior look is guaranteed by three new optional trim lines (high-gloss brown burr walnut wood, satin-finish grey ash wood and flowing lines designo magnolia wood) as well as the new interior colour concept, porcelain / tizian red. The interior of the new S-Class models is characterised by two new high-resolution displays, each with a screen diagonal of 12.3 inches. Visually, the two displays under one shared glass cover blend into a Widescreen Cockpit and, as a central element, emphasise the horizontal orientation of the interior design.

Like the instrument cluster, this Widescreen Cockpit contains a large display with virtual instruments in the direct field of vision of the driver, as well as a central display above the centre console. The all-digital cockpit offers the three visually very different styles "Classic", "Sporty" and "Progressive". 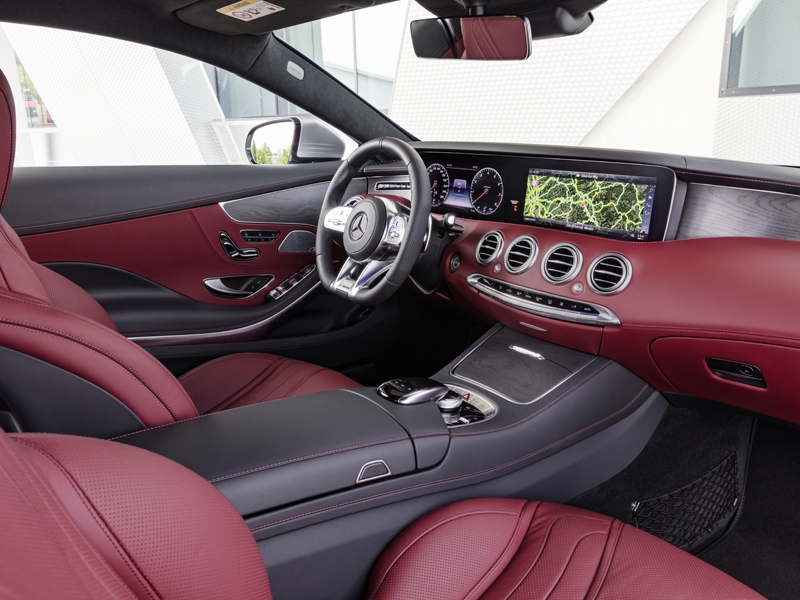 Both models have Touch Control Buttons on the newest generation steering wheel. They respond to swiping motions like the screen of a smartphone. They enable the driver to control the functions of the instrument cluster and of the entire infotainment system without having to take their hands off the steering wheel. The operation of DISTRONIC and cruise control with controls directly on the steering wheel is another new feature.

The infotainment system can also be operated via the touchpad with controller in the centre console and by LINGUATRONIC voice control. Voice control has for the first time been extended to include vehicle functions. Voice commands can now also be used to control the air conditioning and seat heating/ventilation, interior lighting (ambient lighting, reading lights, lighting in the rear), fragrancing/ionisation, seat massage function and Head-up Display. Depending on language version and vehicle equipment, up to 450 individual voice commands are now possible. 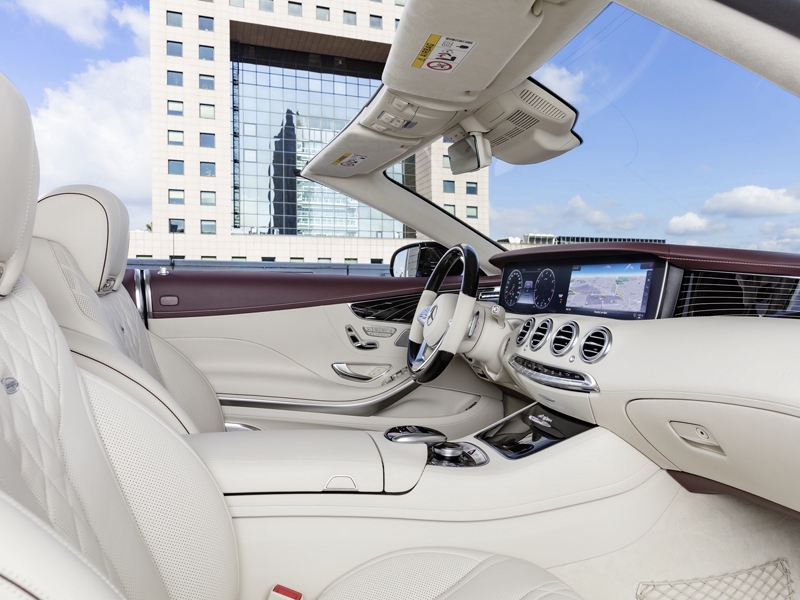 ENERGIZING comfort control, standard in GCC and optional in Levant, links various comfort systems in the vehicle together. It systematically uses the functions of the climate control system (including fragrancing) and the seats (heater, ventilation, massage), the panel heating as well as lighting and musical atmospheres, and enables a specific wellness set-up tailored to the mood and need of the customer. As a result, well-being and performance levels are enhanced.
Depending on the equipment level, up to six programs are available: Freshness, Warmth, Vitality, Joy, Comfort and Training (three training modes – muscle relaxation, muscle activation and balance - each with several exercises).

ENERGIZING comfort control also incorporates ambient lighting, which is harmoniously tailored to each of the individual screen designs, with 64 colours, and extended ambient lighting, offering a wealth of individual settings. The light stages the interior like a work of art by composing colour worlds from different colours. 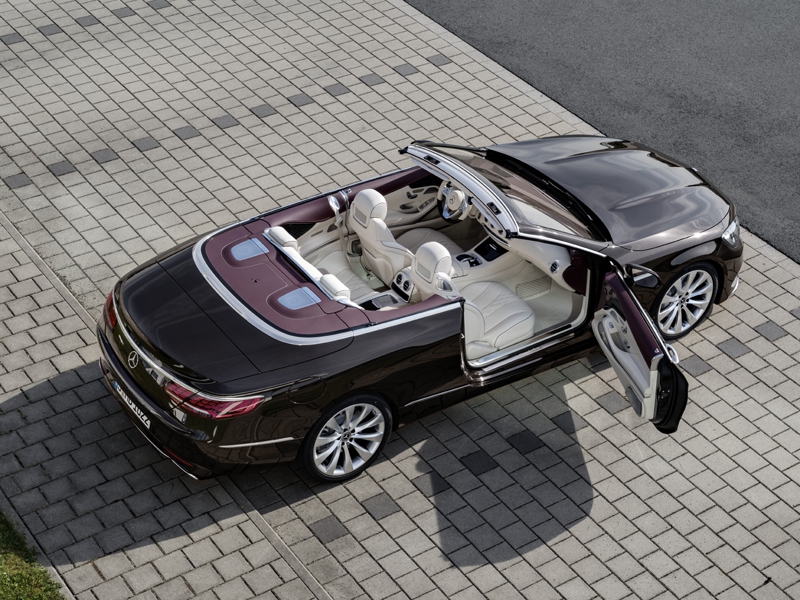 All S-Class models are equipped with the latest-generation infotainment system COMAND
Online, starting a new era in digitisation and connectivity.
As part of the standard package, mobile phones can be charged wirelessly without the need for a telephone holder. Wireless charging works with all mobile devices (up to a screen diagonal of 15.2 cm) that support or can be retrofitted to support the Qi standard. The charging pad is integrated into the stowage compartment at the front of the centre console.

New driving assistance systems with extended functions
The S-Class Coupé and Cabriolet are taking a further large step towards autonomous driving and are moving to the next level with a range of new or considerably extended Intelligent Drive driving assistance systems. Active Distance Control DISTRONIC and Active Steering Assist now provide even more comfortable support for the driver to keep a safe distance and steer. The speed is now adjusted automatically ahead of bends, junctions or roundabouts, for example (country-specific variations may occur in terms of the individual functions). For this purpose, for example, Active Distance Control DISTRONIC makes considerably greater use of map and navigation data than hitherto. 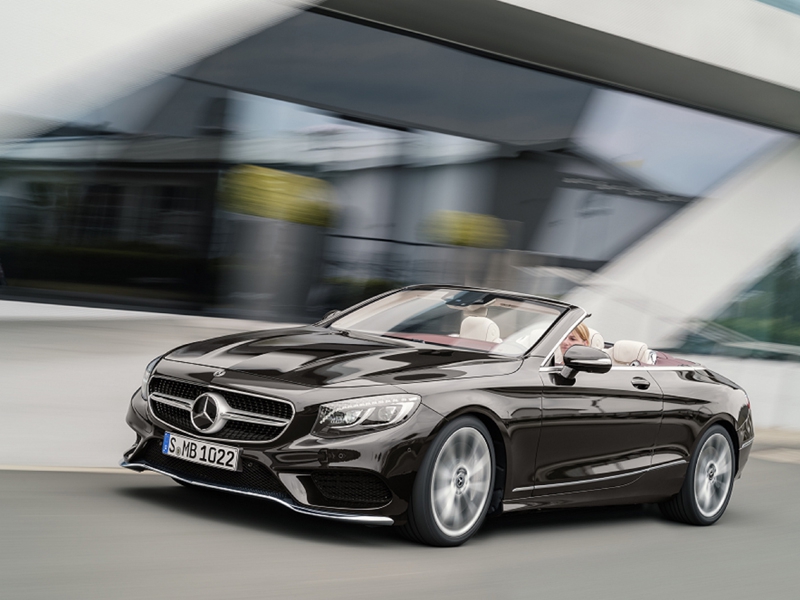 In 2014, the S-Class Coupé offered the optional MAGIC BODY CONTROL suspension with curve tilting function - a world first in a standard-production car. The body tilts to the inside of the turn by up to 2.65 degrees and thereby reduces the transverse forces perceived by the passengers. This innovative system recognises bends with the help of a stereo camera behind the windscreen, and a lateral acceleration sensor of the ROAD SURFACE SCAN suspension. In the new S-Class Coupé, this suspension control is further improved: the system's new stereo camera has a much better performance and works at speeds up to 180 km/h.
The S-Class Cabriolet is fitted as standard with the full-support AIRMATIC semi-active air suspension featuring infinitely variable damping control.

The new V8 biturbo in the S 560 Coupé and S 560 Cabriolet is one of the world's most economical V8 petrol engines and consumes up to eight percent less than its predecessor. To lower the fuel consumption, four cylinders of the new V8 are deactivated simultaneously under partial load with the help of the CAMTRONIC valve-lift adjustment system (Coupé only). This reduces the pumping losses while improving the overall efficiency of the remaining four cylinders by shifting the operating point towards higher loads. The turbochargers positioned in the V of the cylinder banks represent another special feature. The new V8 has an output of 345 kW (469 hp) with a peak torque of 700 Nm.
Tags
Cars
Share