The visceral rage of boxer Jake LaMotta. The calculated calm of young Vito Corleone. The bombast of gangster Al Capone. The shrewd, dry humour of father-in-law Jack Byrnes. Each of these characters and so many more have been brought to life memorably by Robert De Niro.
He is an actor, director and businessman, a two-time Academy Award winner who has appeared in more than 95 films. Having turned 74, he remains exceptionally busy.

De Niro married Grace Hightower in 1997, and they have two children: Elliot and Helen Grace. He has four other children and six grandchildren, and is a longtime resident of New York City.
He has given few interviews throughout his long career, but on a hot day in May, De Niro sat down in the New York City offices of Cigar Aficionado for a face-to-face discussion with Marvin R. Shanken. The two spoke at length about De Niro's storied career in film and his goals for the future.

Shanken: I've done quite a few interviews. I've never worked so hard, preparing for you. So you're in a lot of trouble to begin with. With all of your movies and businesses and everything else, I'm exhausted. I think I should get an award.
De Niro: (laughs) Shanken: Let's get started. You're my age. When do you plan to retire?
De Niro: Well I don't really think of retirement because I don't know what else I would do other than do what I'm doing, I guess. I don't feel, and you can tell me how you feel, but I don't feel really much older than I think. I look at myself, I'm not even used to looking at myself as being older. It's a little disconcerting if you see somebody you've known in your 30s or 40s or even 50s who has not aged well, or just got older. That's life.

Shanken: OK. Let's get a little deeper. You, over the years, have done roles on what I call the dark side. A mobster. Vietnam War veterans. A psycho. A drug addict. Then all of a sudden 15 years ago you do Meet the Parents. Which is comedy. What happened? What caused you to go 180 degrees from serious, tough movies to family entertainment?
De Niro: It didn't bother me, and I never thought about it. Billy Crystal asked me, with Analyze This, and I just said ‘Let's have a reading of this.' Actually, Pacino got me on that, because he liked to have readings too. He was influential in that. So you have a table reading to just kind of lift it off the page a little bit. You have a bunch of actors, who are not necessarily going to be in it, you have a reading, you have a director, or sometimes no director, you sit, and you have somebody in charge of where it's going to go financially. And you just read it. Sometimes you see you have to work on it more, or you say let's get it ready and do it.

Shanken: But did you wonder if this was a good or bad move for your career?
De Niro: No, I didn't worry about that too much. After Analyze This, Jay Roach asked me if I wanted to do Meet the Parents. I liked Jay a lot, so that's how it started. 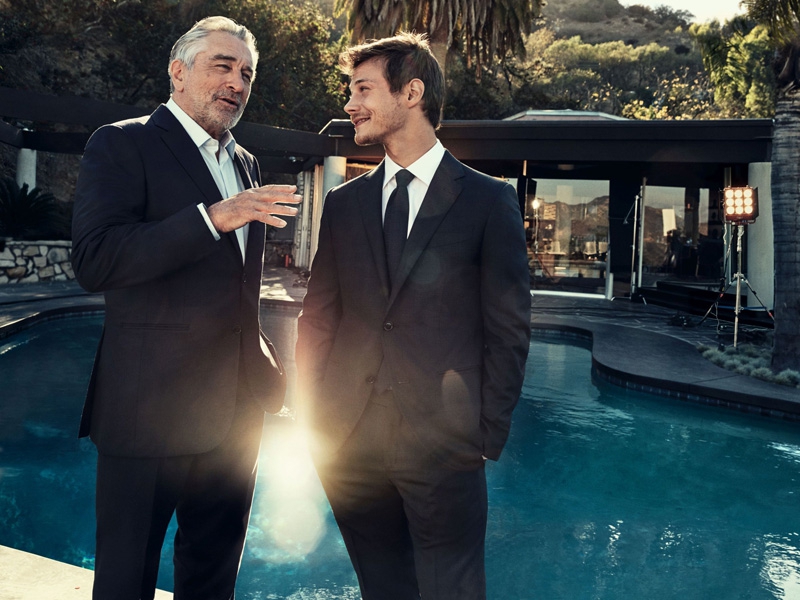 Shanken: I doubt there's anybody on earth who hasn't seen you as Vito Corleone in The Godfather Part II. So how did the role come about, that you got the part? It's a great part. You did a great job.
De Niro: I had known Francis [Ford Coppola, the director of The Godfather trilogy of films] a little bit before. Mean Streets had come out and he was talking to Marty [Scorsese] the way I understand it. Marty, I think, showed him that, and Francis wanted me to come out and read for him in San Francisco. Then I got a call a week or two after, don't bother, the part's yours. That was it.

Shanken: How did that role impact your life?
De Niro: Getting the part changed my career, or revved it up, if you will. Then winning the Academy Award, you're kind of guaranteed that you're going to work again as an actor. The way I remember it, the movies that were becoming the blockbuster type films, Godfather part one was the first one that I remember in my lifetime as a young man. Then there was Jaws, then there was Godfather II, so these movies started coming out that were huge. The anticipation of Godfather II was really big. Luckily, Francis wanted me to do it.

Shanken: What's your favourite movie of your movies? You have 95 to choose from.
De Niro: Is that how many I've done?

Shanken: That's how many I count. And I want to put on the record, I couldn't watch them all.
De Niro: Of course not.

Shanken: And I was watching movies morning, noon and night. And some of them I watched multiple times.
De Niro: I can't say. I know it's an answer you don't want to hear, but some of the movies I enjoy doing for one reason, others they were hard to do but more gratifying.

Shanken: Are you ready? [Shanken takes out his iPad, puts it in front of De Niro and presses play, launching a series of film clips of De Niro's many cigar smoking scenes: Cape Fear, The Untouchables, Once Upon a Time in America, Raging Bull. De Niro watches, looks sceptical at first, laughs a bit and nods at the scenes as they unfold.] So the obvious question: How important were cigars in those roles? And did they make a difference in your performance?
De Niro: In The Untouchables and Cape Fear, I think they were good to have, appropriate for the character and for the scenes. 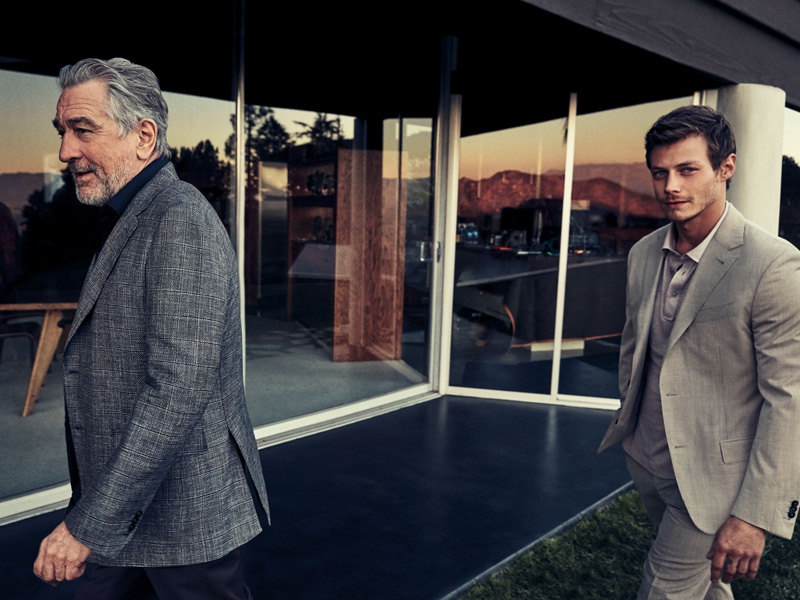 Shanken: Did you ever smoke cigars?
De Niro: I did, from time to time, but I stopped.

Shanken: So you were an occasional cigar smoker. Do you remember what you smoked?
De Niro: I liked to smoke Quai d'Orsay, which you could only get in France, and I liked Partagás No. 4. But I don't smoke so much. Rarely, rarely.

Shanken: So Drew [Nieporent] used to say you kept a humidor at Tribeca Grill filled with Cuban cigars that all your friends used to dip their hands into. Is this urban legend?
De Niro: I don't remember that.

Shanken: What actors, or actor, have you not done a movie with that you'd like to?
De Niro: I'd like to do something with Leonardo DiCaprio.

Shanken: So, when I ask people about you, they describe you as humble, shy, uncompromising, true perfectionist, and most loyal to your old friends. Nice descriptions. Which ones are accurate?
De Niro: Uh, I'd like to think they're all accurate. (laughs)

Shanken: You directed only two films, A Bronx Tale and The Good Shepherd, out of roughly 95 films you performed in. What are the differences between directing and acting, and which do you prefer?
De Niro: Directing is a much more consuming thing, which I like very much. You have to make all the decisions, you have to make them quickly at times, you're under the gun schedule wise, budget wise, it's hard to give up certain things, but you have to. When you shoot them you might have to give them up anyway for the overall story, the overall picture, and sometimes it's hard to give them up because you've put so much effort into those scenes and you don't have enough objectivity. And you have to balance what is good for the picture and what you want. It's a constant give and take that's always there when making films, because they cost a lot. Even the lower-budget films. Shanken: Do you have any plans or ideas of directing another film?
De Niro: I would but it has to be something that I really want to do. I wanted to do a sequel to The Good Shepherd but we just never got there unfortunately.

Shanken: When you were a young actor, did you ever envision becoming involved in the business world? Becoming an entrepreneur?
De Niro: No, I'm not sure. I might have thought about it.

Shanken: I'm going to mention some people. Say the one word about the individual that flashes into your mind. Al Pacino.
De Niro: A friend.

Shanken: (laughs harder) This is not where I was hoping to go! Sylvester Stallone.
De Niro: A friend. Shanken: But you gotta talk about—
De Niro: How can I describe—Billy's a great comedian, he's just is so great, smart and special. He's something.

Shanken: So Marlon Brando, Joe Pesci, James Woods, they're not wonderful actors, they're just friends. (laughing)
De Niro: No, Brando's a great actor, I always mention him, James Dean, Montgomery Clift as the three that I was affected by.

Shanken: Obviously I was looking for—
De Niro: Description, ahh, it's too hard.

Shanken: Martin Scorsese.
De Niro: He's a friend and I'm fortunate enough to have done eight movies with him, and we will do one more and I hope we do more.

Shanken: Is there anything you haven't accomplished as an actor you wish you had?
De Niro: I can't think of anything that I didn't do. I mean, I'm very lucky.

Shanken: What's the one thing you haven't done yet that you want to do before you die?
De Niro: [knocks emphatically on the table] I want to live as long as I can for my kids.