Sebastian Vettel tells Daniel Johnson why rule changes and the ‘bling bling’ world are not for him.
Clearly Sebastian Vettel is not enamoured with Formula One's brave new world. Does the former world champion and Ferrari driver find any reason to love the new F1 and the new rules for the car? He ponders the question. And then he ponders it some more. But after what seems like an eternal pause, the German replies bluntly: "No."

Vettel and Ferrari enjoyed a resurgence in 2017, sitting prudly on top of the leaderboard for over half of the season after four exhilarating wins. After dropping to second in the standings, Vettel was hit by a combination of poor reliability and results in the second half of the season and this left him trailing Lewis Hamilton significantly with his title hopes eventually ended in Mexico. In addition to the numerous 'youngest' records held, Vettel is currently in fourth place among all time race winners, polesitters and podium finishes. 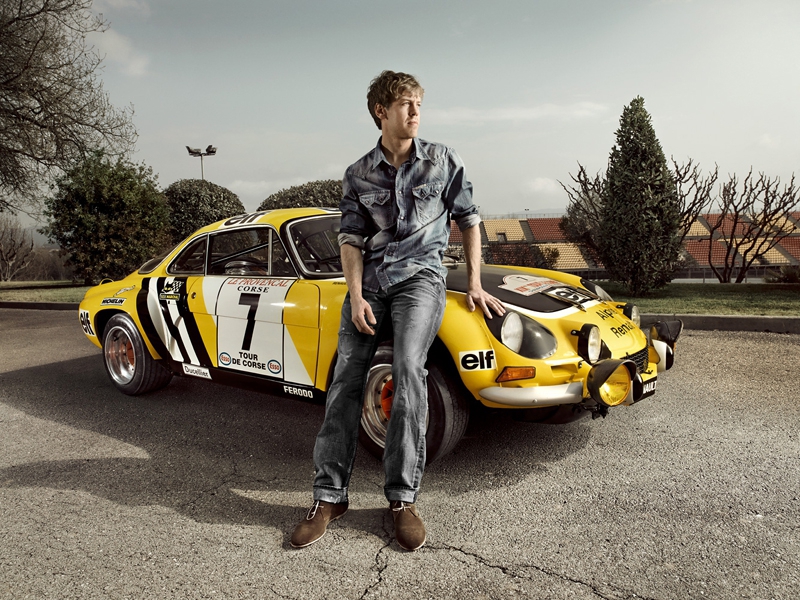 He was of course the youngest driver ever to win the World Drivers' Championship, aged 23 and in the same year he helped Red Bull win the team's first World Constructors' Championship. He followed up his first championship with three more titles, all in succession, becoming the youngest double, triple and quadruple world champion in Formula One.

You know he drives for Ferrari. You know he's a four-time world champion. You may even know that he gives his F1 cars affectionate nicknames. But would you like to learn a little more about the notoriously private Sebastian Vettel? Help is at hand with the first instalment of our new interview series…The notoriously guarded 30–year–old, often reticent to discuss anything other than racing matters, is evidently learning to speak his mind. On Thursday he described the new engine noise as "s–––", and being a four–time champion has obviously brought an additional air of comfort to his boyish persona, knocked so badly by the controversy here in recent years.

While he still relishes competing to be the best – something many in the sport refuse to acknowledge he has achieved, despite the consecutive crowns, largely because he has not won in an uncompetitive car – Vettel will not be swayed from his view that Formula One has taken a wrong turn. "I think this year's regulations are very, very complex. The engineers are struggling to understand everything, so you can imagine for the drivers, and you can imagine for journalists, or the fans. I think in the end we're here to put on a show. I'm here to race, I'm here for the sport, and Formula One should be exciting, it should be spectacular. "Obviously there are a couple of things that made Formula One less spectacular this year, which is not my decision. But I still try to manage the challenge and try to do it better than anybody else. But if you look at raw performance, power, the lap times we do, we're not going quicker." While not calling for a return to the sport's more dangerous days, he goes on to profess that the cars should "frighten" drivers. "It should be a beast that you have to focus to try and control," Vettel argues.

He says his biggest wish is to go out and "behave like an idiot without anybody noticing", but that is surely becoming harder and harder with the fame his success has produced.
His private life is a subject he does his best to avoid as much as possible. While he is polite enough to smile as he says he is "trying" to be a good father, admitting having a child has "changed his priorities", Vettel has little more to add on the matter.

"It's a completely different experience. But generally I have been quite consistent in separating basically the racing part and the private part, and that's why I don't really want to talk about that."

As he returned to his Swiss home to cast his eye over his four championship winning cars, and a trophy cabinet he has rapidly outgrown – "it's a nice problem to have," is his assessment – he must have been wondering where it had all gone wrong. But at the moment Mercedes seems out of reach when it comes to their engines. If Vettel is eventually able to haul in the Mercedes, with his car's 2018 engine, few would doubt him then. While he may criticise the sport's new, greener and safety agenda, it is plain that he does really "love" Formula One, even with all its trappings and excess.

The "maturing" Vettel admits he is not "political" enough for team management, and racing is patently the only thing which truly makes him tick. "It depends how you look at the circus – the way I look at it, is it's mostly racing. The fact that you are competing against the best in the world, you are racing in the best cars in the world. At the moment they don't sound very good, but generally though it's Formula One. It's the pinnacle of motorsport.

"It's what I was dreaming of when I was a young boy. I have to say it's everything I ever dreamt of, if not better. It's not the way I look at things. Of course I complain, I'm German after all, but we all have the chance to be happy." Can we quickly jump the interview in a Q & A so the Life Beyond Sport readers can get to know you a little bit better? ‘’Sure, as long it will not get TOO personal. [Laughs] ‘’

Q: Apart from driving a Formula One car, what is your favourite buzz?
Sebastian Vettel: Speed in general.

Q: What are you afraid of?
SV: Tyre degradation! [Laughs]

Q: What did your teachers say about you in your school report?
SV: As I just said: I don't read much!

Q: Do you have any guilty pleasures?
SV: Chocolate. Q: Do you collect anything?
SV: No. That’s something I’ll keep for later.

Q: What do you miss most about home when you’re travelling?
SV: Home, and everything that belongs to it: my bed, my pillow…

Q: What was your worst buy?
SV: For sure some electronic gadget, maybe another phone charger - a bit of useless stuff…

Q: What’s your ideal non-race Sunday?
SV: Being at home, sleeping late and spending time with family and friends.

Q: What’s the most embarrassing mistake you’ve ever made?
SV: Fuji 2007 [when Vettel crashed into the back of future team mate Mark Webber, eliminating both men from the race]. And after that comes the incident with Lewis in 2017 when I hit his car when I was angry.

Q: When was the last time you were really angry?
SV: I get angry a lot when people are ignoring the blue flag and when I’m stuck behind them. Q: Do you believe in love at first sight?
SV: Not anymore - I am in love.

Q: What’s the worst thing about being famous?
SV: Being famous! [Laughs]

Q: Outside of F1, what brings you the greatest satisfaction?
SV: Just unwinding and using the free time with family and friends.

Q: What is on your ‘bucket list’?
SV: Travel, with more time.

Q: You can invite three people to dinner, living or dead. Who do you invite?
SV: Enzo Ferrari, Audrey Hepburn, and Albert Einstein. Should make an interesting dinner conversation!

Q: What was the best thing about being a child?
SV: Not knowing how to worry.

Q: What should everyone try once in their lifetime?
SV: Spending a few months offline.