The International Watch Company in Schaffhausen in Switzerland was founded in 1868, combining American business expertise with Swiss efficiency, but it wasn’t until around 80 years later that the IWC company really took off. It’s Big Pilot range has flown the flag for spectacular yet simple design that’s a celebration of form and function.
The first Big Pilot

Many horlogerie houses made their mark during the 1930s and 1940s fuelled by a need for military precision and a more exploratory age. IWC’s Big Pilot’s watch was first made for the Luftwaffe German Air Force in 1940 (during the Second World War), constructed to be a observation watch. At the time it was the largest wristwatch that IWC had ever made, it was debuted at 55mm and a weight of 183 grams. The first incarnation of the watch was limited to 1,000 pieces and it was powered by the encased pocketwatch Caliber 52.T.S.C. The conical crown was originally designed to be used easily with gloves, and it remains an outside component that’s a stylistic point of difference.

The BIg Pilot didn’t change much until 2002, when a version was released with a 46 mm steel case and the Caliber 5011, still with a seven day power reserve. The sleek, simple design has always stood out against the more and more complicated timepieces that have caused the luxurious watch market to boom in the last 20 years.

Over time IWC has built the Big Pilot watch into a few distinct collections, including the Heritage collection where once version has a 55mm face and a limited edition matte case and another comes in a smaller 46mm face with a bronze case. 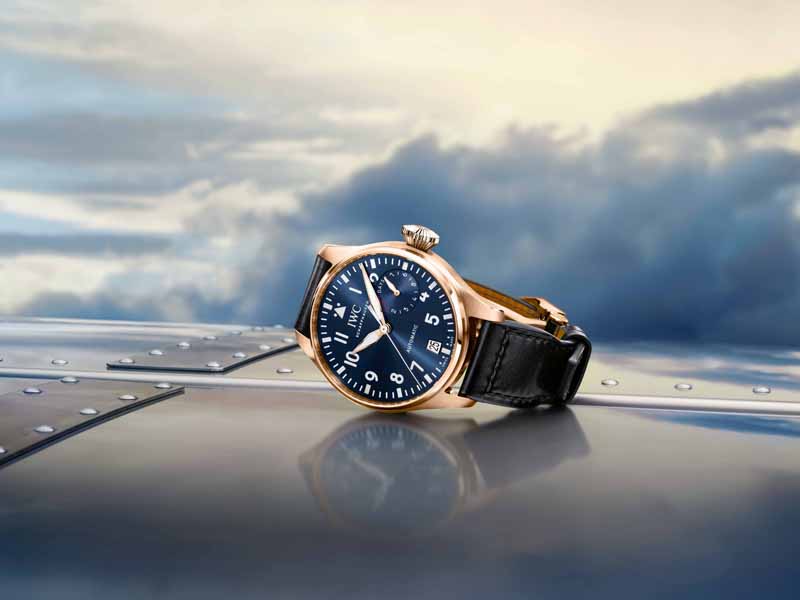 IWC have developed other collections under the Big Pilot style. Spitfire has a 46 mm case of rose gold with a sunburst pattern on the dial and a Spitfire fighter jet engraved on the reverse. The Annual Calendar Spitfire goes one further, using a Caliber 52650 and it can be seen through the case back.

The Top Gun BIg Pilot’s watch has come in matt black ceramic and a textiled, military wristband with an iconic Top Gun engraving on the back since 2007. This year, IWC has unveiled an update for the Top Gun, which celebrates the best of the best American fighter pilots. It uses an innovative new material Certanium, which is a mix of ceramic and titanium, which makes it lightweight, scratch proof and unbreakable. The Pilot’s Watch Double Chronograph TOP GUN Ceratanium is IWC@s first completely all black design, has a power reserve for 44 hours and is powered by the Caliber 79230.

It’s not just pilots that the Big Pilot now graces, it’s everyone from explorers to Alisters, such as Bradley Cooper who wore a IWC Big Pilot watch to this year’s Oscars, which was a one off, engraved with the  Antoine de Saint-Exupéry quote, “It is only with the heart that one can see rightly“.

It was then auctioned off to raise money for the Antoine de Saint-Exupéry Youth Foundation, the French writer and pilot, who wrote The Little Prince. IWC CEO Christoph Grainger-Herr said,  “Supporting disabled children and adolescents is one of the cornerstones of our CSR effort. I am pleased that, together with our brand ambassador Bradley Cooper, and the Antoine de Saint-Exupéry Youth Foundation, we have the opportunity to support the association Arrimage.” 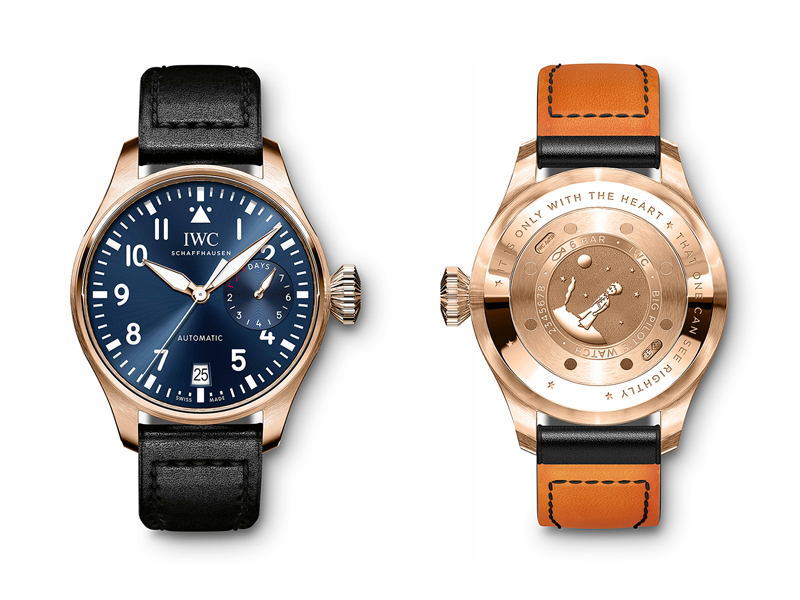 A few years ago, in 2016, IWC took another look at the Big Pilot’s Watch and gave it a subtle update. It features the IWC’s own 52110 calbre movement, a Pellaton automatic winding system that’s made from ceramic. It has a seven day power supply with the remaining hours indicated at 3 o’clock. There’s a date display at 6 o’clock and the central seconds which any good pilot relies on, a nice nod to the watch’s heritage. As is the Junkers JU-52 plane etched into the case back.

The 2016 version sits within a smaller 42 mm case which is both water resistant (to six bar) and protected from the earth’s magnetic fields by a soft iron inner case. Italian leather straps, made by Santoni, compliment the modern take on a big hearted classic.

The Big Pilot watches still have some military characteristics of the originals. A Big Pilot watch is distinguishable for the sans serif typeface for the numerals and a military triangle at 12 o’clock which has two dots by it. 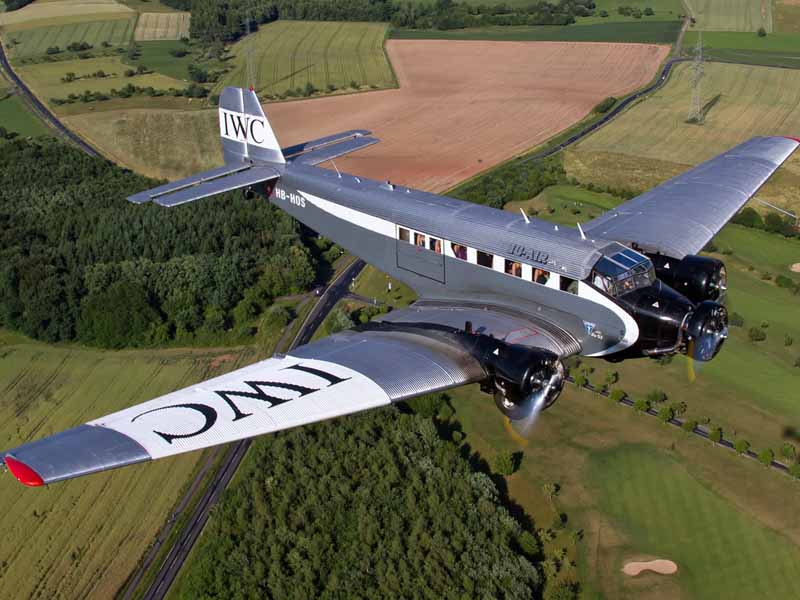 The next step for the Big Pilot watch

Earlier this year, IWC unveiled the latest models of the Big Pilot watches at the UK’s Goodwood Aerodrome, which is home to the Boultbee Flight Academy, the world's first official Spitfire flying academy.

“Our new Spitfire line is made using exclusively IWC-manufactured calibres. In the new TOP GUN line, we are using Ceratanium® for the first time in a Pilot’s Watch, giving rise to a completely jet black double chronograph. Last but not least, our special editions honouring the Antoine de Saint-Exupéry novella Le Petit Prince demonstrate our top-flight skills in the field of haute horlogerie,” says IWC CEO Christoph Grainger-Herr, when launching the new range.

The new Spitfire range is a perfect mix of form and function that’s inspired by the Mark 11 navigation watch and powered by IWC Calibre. There’s an even more incredible watch, the Pilot’s Watch Timezoner Spitfire Edition "The Longest Flight" of which there have been just 250 made. It’s the first time that IWC has combined their TimeZoner mechanism with an automatic IWC movement. The cockpit inspired palette and design reflects pilots Steve Boultbee Brooks and Matt Jones efforts to try and get around the world in a Spitfire.