Director at Spanish Soccer School and Coach on “The Victorious”

We recently got the chance to catch up with Michel Salgado and learned not only what he has been up to since we last met but also what his plans are moving forward.
How is the Academy doing since we last met you?:
“Well so many things have happened. I am now in the 3rd year of working with the kids and we will be starting our 3rd season shortly. Our target is a lot different and I feel that now the academy is well established we need better competition and to this end we are sending some of our kids to Spain, Cyprus and other such countries to compete in high level tournaments. Currently we assess the kids in the Academy and use a grading system which I will explain a bit later. I really want to develop players in the Emirates which is hard to do, however having said that I am more than up for the challenge. We are in touch with schools in the US and other such countries with many coaches interested to offer scholarships which is exciting for the children and also for their parent’s eager to see their children get a good education.” 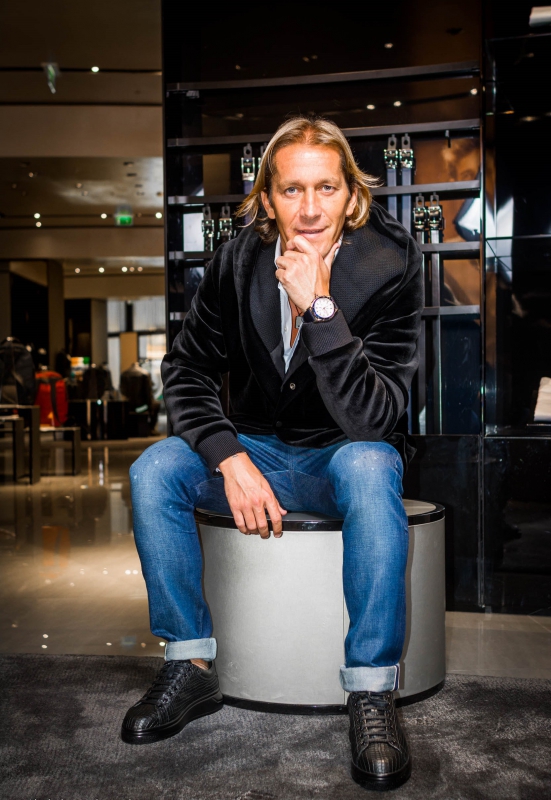 What are the age groups for the kids?:
“Well the academy is open to all ages and once they arrive we assess them in order to assign them to the right age group and skill level. We achieve this by using a grading system. So an A grade means they are ready to compete i.e. – these are the ones we feel have the most potential. The B grade means we feel they have something but need improvement – more interaction with the ball. Our grade C are usually students that do not play football so in essence are beginners – We try and make it as interesting as we can for them in a hope that they take up the sport.

As expected different activities will be assigned to the different grades and in future we are hoping to open different academies in various countries which is not unrealistic, if the number of requests we are getting to do just that are anything to go by. It means that a lot of eyes are on us which puts us in a very strong position.” 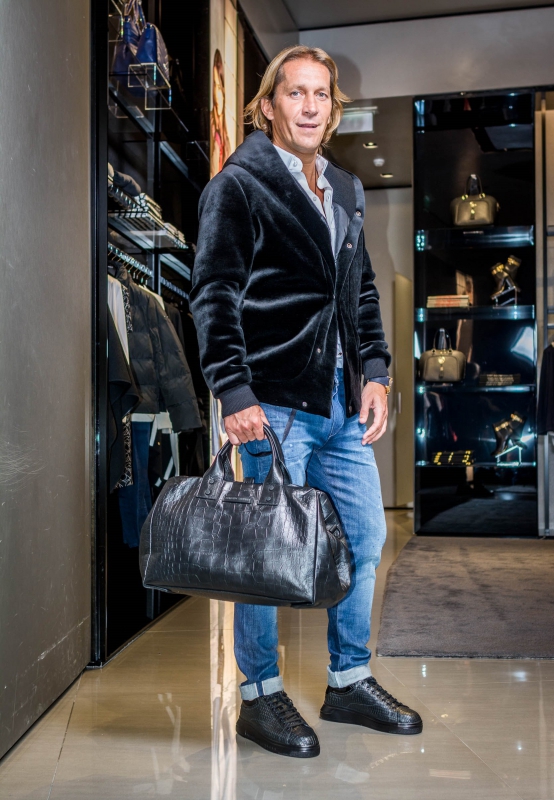 Please explain more about the Scholarships if you can:
“We are not only focused on sending our kids to the US only but also Europe as well. We have already sent some students to European tournaments or to train with teams like Celta de Vigo or Brøndby in Denmark. We only send the ones we think have something special, so by sending them to play at a very high level we feel it is a perfect test and indicator for us to see our students’ current levels and see if there are any weaknesses in our practices and if so find ways to improve.

Most of the coaches in the Academy are Spanish with one or two from other countries. They are all competent in their areas of expertise with some being with Real Madrid for 8 or 9 years of pure training. Many of these coaches are not ex-professional footballers since being an ex-footballer does not automatically mean that you can successfully handle and coach kids.

The training ages starts from the 2.5 to 4-year bracket and we assign them to a special program. Usually it will be in groups of 10 – so there will be 10 kids with one of their parents in attendance. We do it like this since some kids miss their parents after short periods of time so by having a parent near we find it easier to make them settled and hence easier to train. Our aim at this stage is to get them to like the sport and it really works. When you see them going into the next group of 6 years onwards they tend to settle in well. Generally, the earlier they start to train the better for the kids. I am therefore very happy with the progress of the academy. The next step in my ambitious plan is to setup an Elite Academy.” 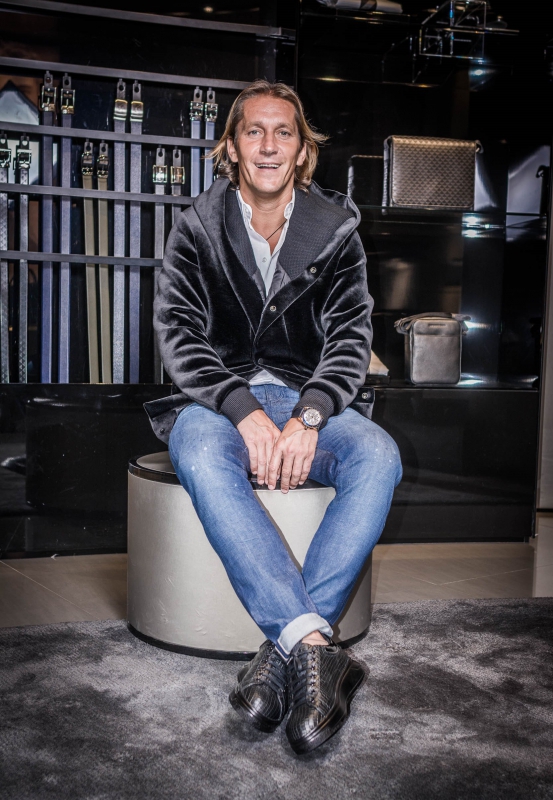 So what is happening now?
“I am involved in a number of things – one of them being the Victorious Series – a show that serves as a final opportunity to many kids that more or less have nothing. In the show we go around the whole Arab world to places such as Jordan, Lebanon, Tunisia, Algeria, Egypt, Morocco, Saudi Arabia, Dubai, Oman and so on. The kids we typically encounter are poor with no contract and playing in the streets with little to no money for equipment or even standard football kit. In a day in places like Morocco or Egypt I can see up to 3000 kids showing various levels of potential. During the show both on and off camera I hear incredible stories from the 15 to 21-year-old teenagers who feel they have nothing to lose by trying their best to win. In this respect the show is really beautiful and a great testament to humanity and as the coach and main judge I interact most with the contestants. When the kids come to the trials some don’t even get to play which is at times pretty emotional. For those like myself who are deeply involved it is even harder to cope as I actually get to know them on a far more personal level.

So eventually 20 winners are chosen to come to Dubai - The final stage, and from these 1 winner is selected to win the US$100,000 prize which obviously changes their lives. Additionally, the top 3 will be given the chance to go and try out for teams in Europe. This has happened, with the winner of the first season (from Morocco) now playing for a third division team in Spain. The second season winner (from Egypt) tried out and almost made the Benfica team but now plays for a second division professional team in Egypt. We are preparing for the 3rd season and will be doing the casting in October and November.

It is the small nuances of the show that really make memorable experiences for the kids and they get to meet legends such as Luís Figo, Alessandro Del Piero and Ronaldinho. Actually, in one episode Ronaldinho pretended to be a security guard during one of the kids training sessions. Finally, when the ball came to him he started to juggle the ball to the kids’ surprise, until they finally realised it was him as he took off his hat and they went into a frenzy. That moment was priceless. Another part I will always remember was in Morocco where at 6am the stadium already packed with kids. When I arrived at 10 the response was so overwhelming we ended up taking 2 days instead of 1 to give them a fighting chance of being seen. I am really proud as it is a lot more than a show as it is changing lives and giving fighting chance to these kids.” 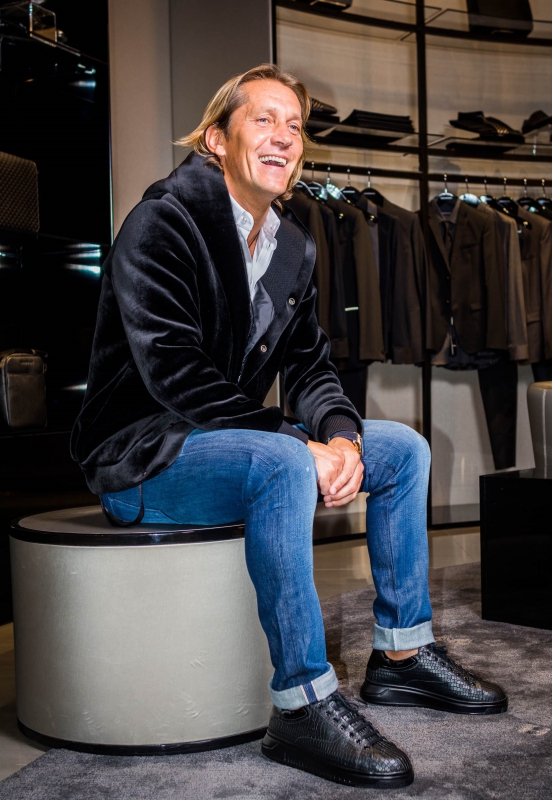 Tell us about you and Armani:
“Well I am definitely a friend of the brand and due to our agreement I involve the brand in all I do. I always feel very comfortable and consider it an honor and a privilege to wear their attire. It is easy to see why they are one of the biggest brands in the world. I see it as a really positive relationship and when they gave me the opportunity to work with them I was very happy to oblige and make them proud. This is effectively my second year as their representative and usually you will see me during practices wearing sporty Adidas attire (as I have a partnership with them also) and then when it comes to the formal parts of the show such as the judging moments you will see me in Armani. “ 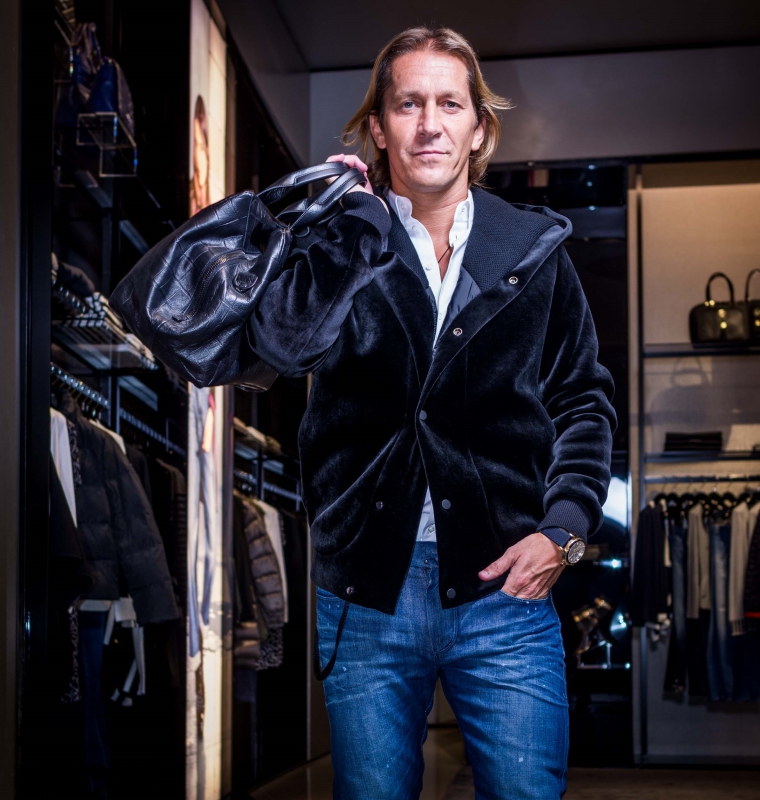 So how is life in Dubai:
“The family loves Dubai and now even when I go to Spain for a month after 2 weeks I am already missing Dubai. I am so impressed by how secure Dubai is – me and my kids are fine and I have found a good, stable life here – I run a successful academy and I also participate in the Victorious - I actually consider Dubai to be my second home.

Apart from these things I also play in Legends games in the Middle East and Asia, usually in 7 a side games. In one of my last games in Beirut my team was Jens Lehmann from Germany, myself, Roberto Carlos from Brazil, Materazzi from Italy, Carles Puyol from spain, Paul Scholes from England, Luís Figo from Portugal and David Trezeguet from France. No matter where we play you can feel the passion for the sport and as I play in these games frequently we try to play in places that do not experience high level live football. “
Tags
Sport
Share