PILOTING THE WAY AHEAD

We look at the history of IWC’s iconic Big Pilot watch!
While IWC itself was born in 1868 it wasn’t until 1936 that the International Watch Company launched its first Big Pilot watch under the management of Ernst Jakob Homberger. This ‘Special Pilot’s Watch’ was made with a rotating bezel with an arrowhead index that could be used to track take off times. While other timepiece manufacturers used the same technology to use antimagnetic alloys for the moving parts, IWC were the first brand to realise the potential of this development to a group of people – pilots. 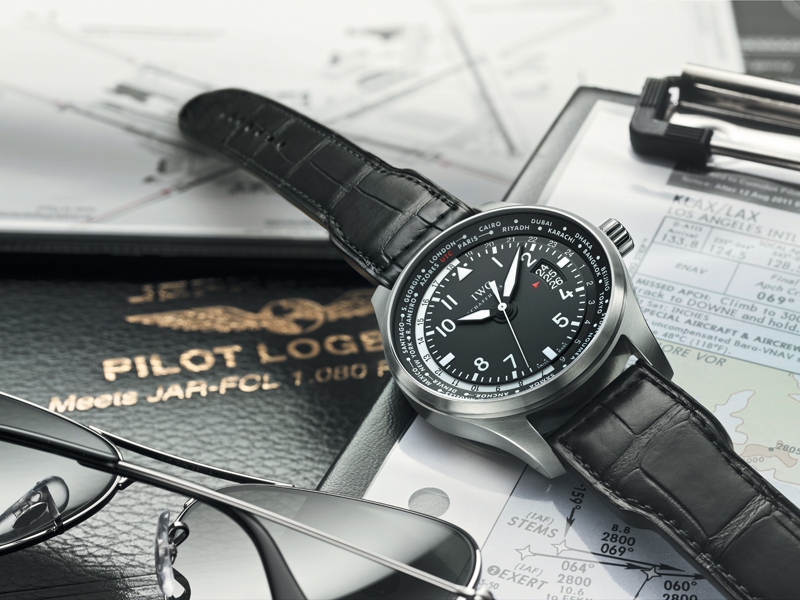 BY 1940 the watch diameter had increased to 55mm with a large crown and a face inspired by the by the Ju52’s functionally designed cockpit. It used a more accurate calibre and the German Air Force ordered a few specific technical changes – in trying to create something reliable and accurate, IWC ended up making a brand icon. By 1948 the face design had become a classic point of the Big Pilot watches, while these later models offered increased magnetic field protection through a soft inner case, something that persists even to this day. By this time the British Air Force were also demanding Big Pilot watches and they refined the watch even further, introducing the Caliber 89 with seconds stop pressure drop protection and allowing IWC to see the potential in using the pioneering technology across other collections. These watches for the military were engraved on the back with WWW – which stood for Watch, Wrist, Waterproof. The 1948 Mark 11 became the benchmark for reliability and quality – something the brand has only built on to this day.

The 1990s saw a return to the iconic Big Pilot watches of the 40s and IWC started to add chronograph features to the Big Pilot model, a double chronograph model debuted in 1992, a much loved move from watch connoisseurs. A ceramic version was also added in 1994 and a Pilot’s Watch UTC (Universal Time Coordinated) which featured an hour hand that could be adjusted in one-hour steps and a 24 hour display debuted in 1998. Then there was a Spitfire Collection, which was equipped for the first time with the IWC-manufactured 89365 calibre and had a flyback function, an ongoing time measurement can be “deleted” without an intermediate stop and start, to the Top Gun range, which has a more military feel and an unconventional division into an external chapter ring and an inner hour circle, a gentle homage to the deck watches of the 1930s and 40s.

The Top Gun collection also includes the Perpetual Calendar with a four digit year display, that combines the date, day and month as well as the moon’s lunar cycle, making this one of IWC’s most complex watches. It even takes into all the leap years in the Gregorian calendar until the year 2100. This is an absolute precision instrument of the highest calibre. Even now in 2014 the Big Pilot’s watch is considered to be a classic. The latest model adds on to the 70 years of tradition at IWC with the addition of the IWC-manufactured 51111-calbire movement, which is the largest automatic movement ever made by the company and which it feels unites all of the watchmaking tradition’s greatest achievements. A spring-mounted rotor and Pellaton pawl-winding system create a week long power reserve over the course of seven days, before the movement is halted after exactly 168 hours. This means there is no danger of diminishing torque as the tension in the spring never becomes exhausted, so IWC can guarantee the accuracy of the watch for as long as it’s running. As with all Big Pilot watches the power reserve can be viewed at 3 o clock, while the date display is at 6 o clock and the central seconds remain as essential as ever for any flying watch lovers. This modern version of the Big Pilot comes in stainless steel, but with a soft-iron inner case for protection against magnetic fields and it is also secured against displacement from a drop in air pressure. It’s water resistant to six bars and comes with an alligator leather strap, and since 2012 there has been a folding clasp which offsets the impressive 46mm diameter of the face. Last year IWC released a very special Big Pilot Perpetual Calendar model. It releases an annual edition to benefit the Antoine de Saint-Exupery Foundation, named after the famous French aviator (and author of The Little Prince). The Big Pilot's Watch Perpetual Calendar is rendered in red gold, with a stunning midnight blue dial. Sitting behind that is an in-house calibre 51623 which combines a seven day power reserve and the perpetual calendar which will run seamlessly until 2299. The watch’s rotor also has the iconic The Little Prince drawing in gold.

But no matter which range you’re looking at within the Big Pilot family, some things never change. The special COMC-shaped crown, the characteristic arrowhead index at 12 o clock. Add to this the fact that each watch is rigorously tested at the Swiss company’s factory, with over 50 separate stages including being submerged in warm salty water for long periods of time and locked in environmental chambers, ensuring that when each watch does meet its owner, it’s probably the most reliable thing they will ever own. IWC has kept a record of every watch that has left its time-piece factory since 1885. If your IWC watch is 10 years or older, a small fee will reveal to you the timepiece’s history. Fascinating for anyone who owns a vintage Big Pilot.