The commissioning of luxury yachts has experienced a surge over recent years with the world’s wealthiest constantly striving to own the biggest and best. In their battle to do so, what started out as a relatively simple vessel with basic accommodation, has rapidly evolved into unrivalled extravagance redefining the concept of luxury as demonstrated with the world’s top 5 most expensive luxury yachts.
5. Dubai – $350 million
The Dubai, owned by His Highness Sheik Mohammed Bin Rashid al-Maktoum (ruler of Dubai), comprises the world’s 5th most expensive luxury yacht. It was originally commissioned by Prince Jefri Bolkiah of Brunei around 10 years prior to its launch in 2006 and was purchased by Platinum Yachts, responsible for the Dubai’s decadent interior. On board this luxury liner are several Jacuzzis, sunbathing areas and a swimming pool boasting beautiful handmade tiling. Similarly, handmade mosaics adorn the stunning interior whilst a beautiful circular staircase, boasting glass steps, changes colour with the light entering from the top deck. A split-level owner’s deck can also be found, as well as a lounge and large social area, and numerous guest and VIP suites with bold colours featuring throughout. Finally, on board the Dubai is a helipad which can accommodate a helicopter of up to 9.5 tons. 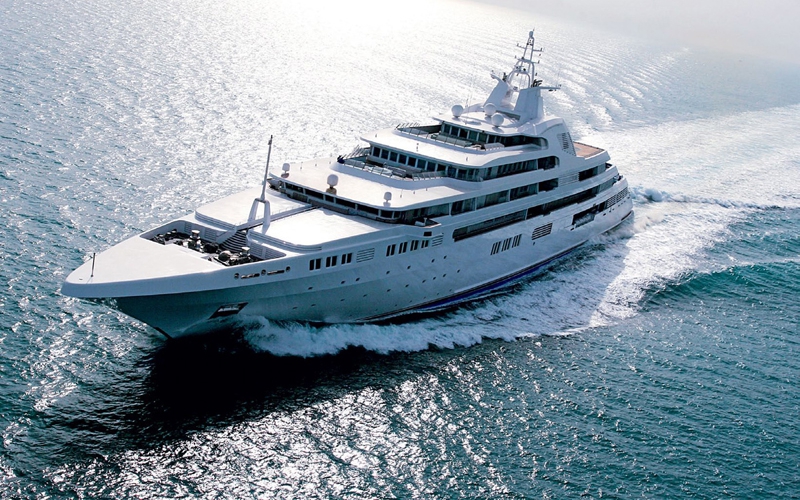 4. Azzam – $650 million
Sheikh Khalifa bin Zayed al-Nayan, President of the United Arab Emirates and Emir of Abu Dhabi, is fortunate owner of the Azzam, worth a staggering $650 million. Measuring in at 590 feet long, not only does this luxury liner boast the world’s 4th most expensive luxury yacht, but also the world’s largest and is expected to reach speeds exceeding 30 knots, or 35mph making it one of the fastest. Finally, little else is known about the Azzam aside from the fact that French interior decorator Christophe Leoni designed the extravagant interior which has been described as “”sophisticated and luxurious in a turn of the century Empire style”. 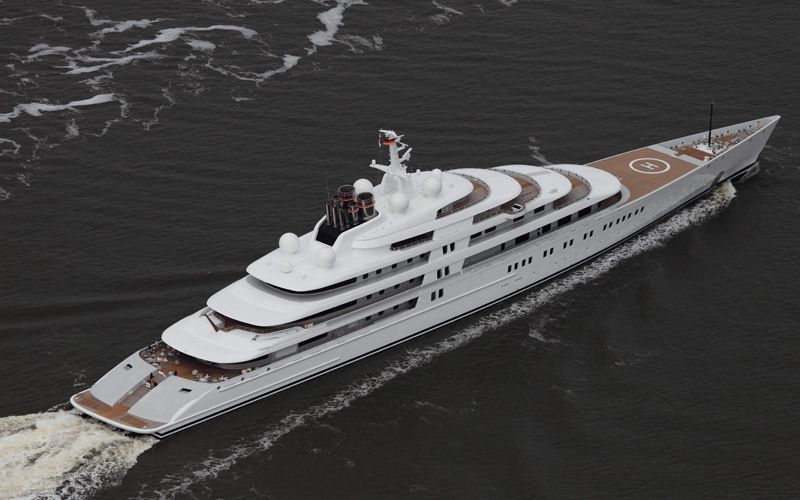 3. Streets of Monaco – $1.1 billion
The Streets of Monaco was designed by Yacht Island Design of Derbyshire County in England. Comprising the world’s 3rd most expensive luxury yacht, it features a floating replica of the city of Monaco or, to be more precise, a scaled-down version of a section of Monte Carlo. Similarly to the real thing, the Streets of Monaco boasts smaller reproductions of the city’s most famous landmarks including Café de Paris, Hotel de Paris, the famous Monte Carlo Casino and racetrack, and La Rascasse, etc. Swimming pools and tennis courts can also be found on board the Streets of Monaco. However, the most outstanding feature of this luxury liner is, without a doubt, the Atrium which houses seven guest suites accommodating up to 16 people. These sumptuous living quarters, modelled on some of the finest hotels in Monaco, each come with their own bathrooms, dressing rooms, balconies and reception rooms.  Similarly, a luxury penthouse divided over three floors and extending over 4,800 square feet, has been reserved for the fortunate owner. Finally, BBQ facilities, a café bar, mini waterfall, helicopters and submarines feature on board the Streets of Monaco. 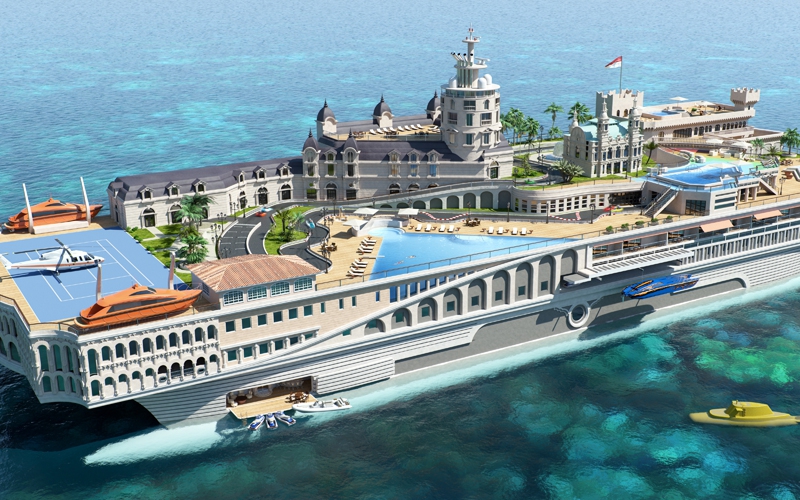 2. Eclipse – $1.5 billion
The world’s second most expensive luxury yacht comprises the Eclipse belonging to Russian billionaire Roman Abramovich. He was rumoured to have paid from $800,000 to $1.5 billion for this luxury liner that also boasts the second largest in the world at 536 feet long. So, to what does the Eclipse owe its huge price tag? Well, its generous size allows for an abundance of on board luxuries including several hot tubs, two swimming pools, 24 guest cabins and a disco hall. Three launch boats, two helicopter pads and a mini-submarine, capable of submerging up to 50 metres underwater, also feature. Finally, the Eclipse famously boasts intruder detection and missile defence systems for maximum security. The master bedroom and bridge of the Eclipse have been fitted with armour plating and bullet proof windows whilst an anti-paparazzi shield featuring lasers sweeps the surrounding areas.  If a lurking photographer is detected, a light is shone directly upon the camera thus making all attempts to take a picture impossible. 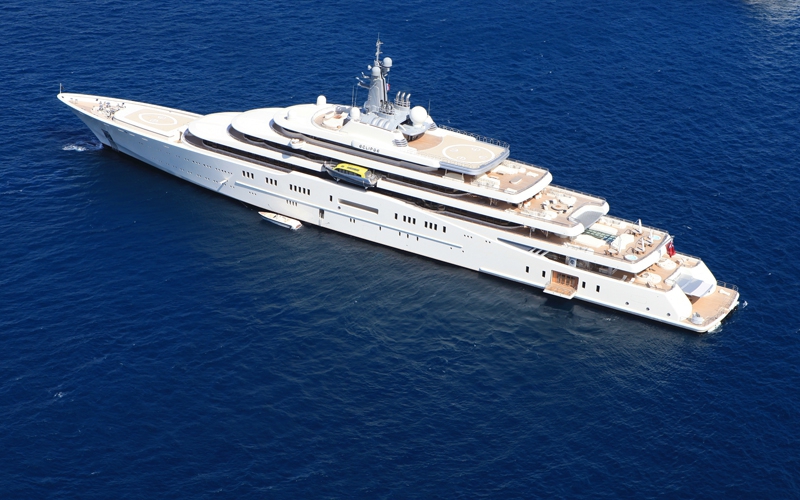 1. History Supreme – $4.5 billion
Finally, blowing all previous records out of the water is the History Supreme. It was recently delivered to an anonymous Malaysian businessman for a staggering $4.5 billion earning this floating extravagance title of the world’s top most expensive luxury yacht. The History Supreme was designed by UK luxury designer Stuart Hughes and took 3 years to complete with the hefty price tag on this luxury liner owing to the 100,000 kg of solid gold and platinum used to adorn it. The base of the superyacht boasts a thin layer of solid gold whilst the entirety of the vessel including the deck, rails, staircases, dining area and even the ship’s anchor, all  feature these precious metals. 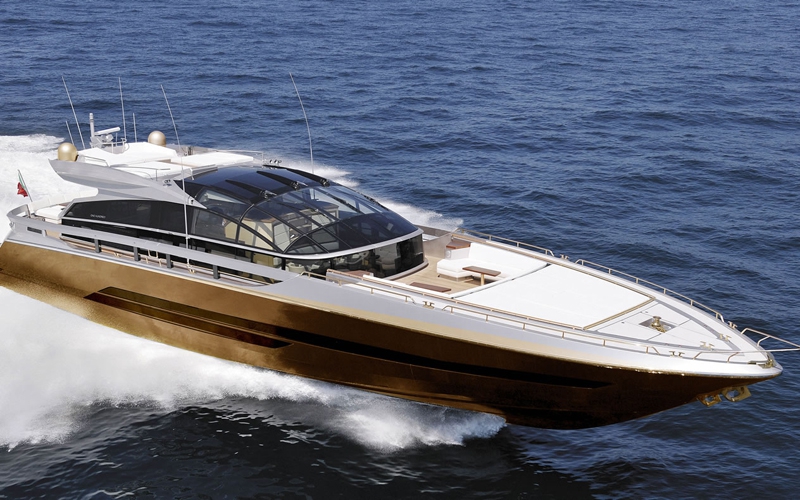