Stuttgart. The new Mercedes-Benz GLE has a wealth of innovations. For example, the active suspension system E-ACTIVE BODY CONTROL on a 48 volt basis is a world first. The interior is even more spacious and comfortable, with a third seat row available on request. The infotainment system has larger screens, a full-colour head-up display with a resolution of 720 x 240 pixels and the MBUX Interior Assistant, which can recognise hand and arm movements and supports operating intentions. The exterior design not only exudes presence and power, but also sets a new standard for aerodynamics in the SUV segment. The new 4MATIC ensures great agility on the road and superior performance off the beaten track.
Exterior design: powerful presence

Modern luxury both on and off the road: that is the design message of the new GLE. The vehicle's proportions with a long wheelbase, short overhangs and large, flush-fitted wheels already leave no doubt that it feels at home and cuts a good figure on any terrain.

The front section of the GLE exudes presence and power: this is ensured by the upright radiator grille in an octagonal SUV interpretation, the prominent, chrome-plated underguard and the bonnet with two powerdomes. This striking appearance is emphasised by the distinctive headlamp design by day and night.The ULTRA RANGE high beam of the optional MULTIBEAM LED headlamps produces the maximum light intensity permitted by law, i.e. the brightness of the main beam headlamps remains above the reference value of 1 lux over a distance of more than 650 metres.

Viewed from the side, the wide C-pillar typical of the GLE conveys self-assured stability. The large wheels in sizes from 19 to 22 inches are housed in wheel arches with prominent liners. This underlines the GLE's robust SUV character, as do the pillared roof rails or the optional illuminated running boards. 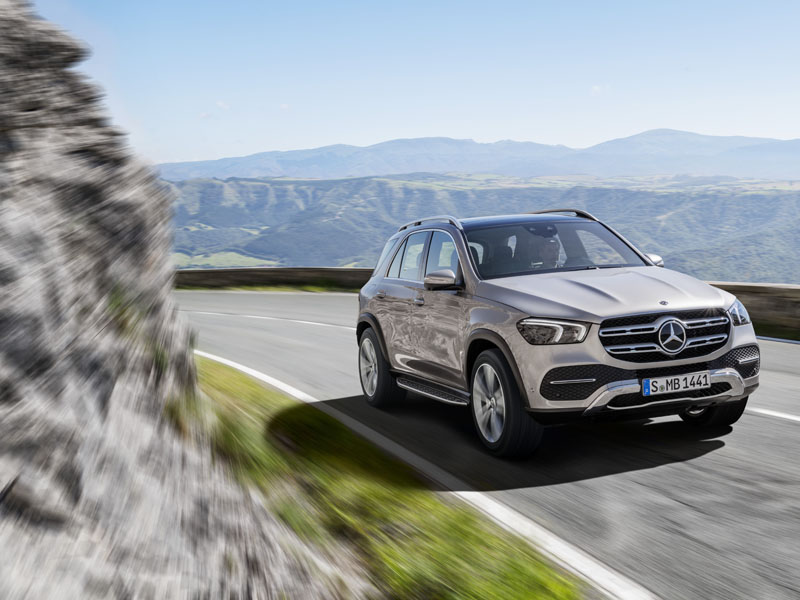 The interior of the new GLE derives its fascination from the contrast between the luxurious, elegant ambience of a Mercedes-Benz luxury saloon and the robust, progressive features of an SUV. The prominent, raised centre console creates a robust contrast with the flee-floating appearance of the dashboard. As a typical feature of off-roaders, there are two prominent grab handles on the centre console. All the controls and displays are in a new design. The controls with haptic and audible feedback appear to have been milled from a solid metal block. Very fine chiselling and pyramid structures show the desire for perfection and craftsmanship. The new sport steering wheel with its striking, sculptured spoke design accentuates the impressive appearance of the SUV's interior.

Interior: more space in the rear and third seat row on request

On request, and as a world first in the SUV segment, a second seat row with six fully electric adjustments is available. The right and left seats can be separately adjusted fore-and-aft by up to 100 millimetres, the backrests are adjustable for angle and foldable in a 40:20:40 ratio, and the head restraints are adjustable for height. In typical Mercedes fashion, the rear seat adjustments are controlled by a switch in the door panel. The backrest can also be completely folded down electrically, using a switch array in the luggage compartment. 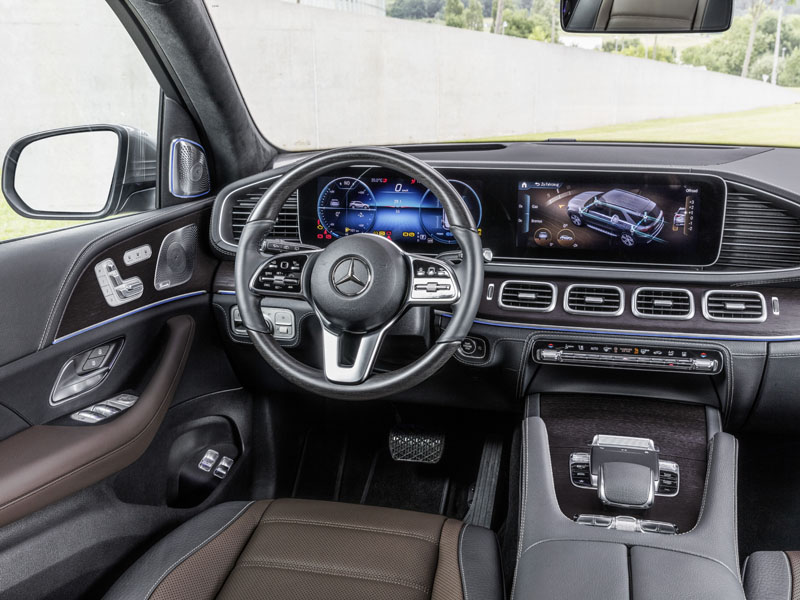 The luggage capacity is up to 825 litres behind the rear seats, and up to 2055 litres when the second seat row is folded down. A 72 mm increase in through-loading width allows bulky items to be stowed more easily. Useful holders and protective elements have been specially developed as accessories for practical stowage of recreational equipment in the interior. In conjunction with the AIRMATIC air suspension, the vehicle's rear can be lowered by around 40 millimetres using a switch, for easier loading and unloading.

Even more flexibility is possible with the optional, folding third seat row, which provides two extra seats. Thanks to the Easy Entry function of the fully electrically adjustable second seat row, the two rearmost passengers can conveniently reach their seats. ENERGIZING seat kinetics is another innovation available for the front seats in conjunction with fully electric seat adjustment with memory function. ENERGIZING seat kinetics supports changes in the seating posture by means of minute movements of the seat cushion and backrest.

ENERGIZING comfort control networks various comfort systems in the vehicle, and uses musical and lighting moods plus a number of massage modes for a wide range of feel-good programmes.

The ENERGIZING COACH is a new feature. This function based on an intelligent algorithm recommends one of the programmes depending on the situation and individual. If a Garmin® wearable is worn, personal values such as stress level or quality of sleep optimise the accuracy of the recommendation. The aim is for passengers to feel well and relaxed even during demanding or monotonous journeys.

Powertrain: in-line six-cylinder in the GLE 450 4MATIC with EQ Boost The Mercedes-Benz GLE 450 4MATIC as the first petrol model is powered by a six-cylinder engine systematically electrified with 48-volt technology, and is available on market launch. Its performance data: 270 kW (367 hp) and 500 Nm of torque, with a further 250 Nm of torque and 16 kW/22 hp available via EQ Boost over short periods. The integrated starter/alternator (ISG) is responsible for hybrid functions such as EQ Boost or energy recuperation, while allowing fuel savings that were previously reserved for high-voltage hybrid technology.

ISG eliminates the need for a belt drive for ancillary components at the front of the engine, which reduces its overall length. The slim design, together with the physical separation of intake/exhaust, creates space for near-engine exhaust aftertreatment. The 48-volt on-board power supply serves not only high power consumers such as the water pump and air-conditioning compressor, but also the Integrated Starter Generator (ISG), which also supplies energy to the battery by means of highly efficient energy recuperation. 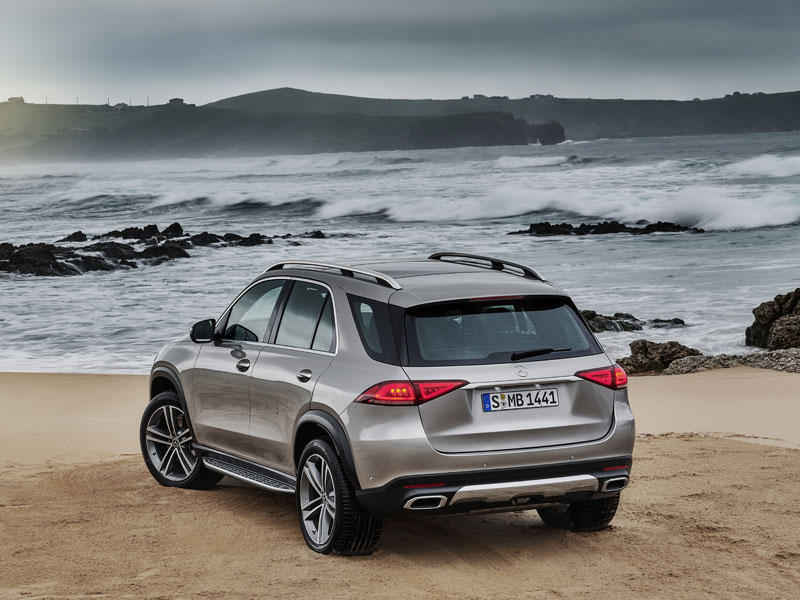 Even better ride comfort and agility plus completely new functions such as free-driving mode are provided by the optional E-ACTIVE BODY CONTROL suspension, which is now combined with the newly developed AIRMATIC air suspension. This is the only system in the market where the spring and damping forces can be individually controlled at each wheel. This means that it not only counteracts body roll, but also pitching and squat. Together with ROAD SURFACE SCAN and the curve inclination function CURVE, E-ACTIVE BODY CONTROL makes an extraordinary level of comfort possible, and supports the claim of Mercedes-Benz to build the world's most intelligent SUV suspension.

E-ACTIVE BODY CONTROL has a 48 V operating voltage and is available as optional equipment for engine variants with six and more cylinders. Free-driving mode is a completely new off-road function: if the GLE has become bogged down in a sand dune, for example, this can help to free the vehicle more easily in many such situations. If possible the suspension level is automatically raised and lowered several times, which changes the ground pressure of the tyres and therefore improves traction – the GLE rocks itself free. Individual wheel actuation is another new function for off-road driving. This allows the level at each wheel to be individually adjusted via the touchscreen of the media display, thus improving the vehicle's attitude on rough terrain when e.g. one wheel is stuck in a ditch or a wheel spring is fully contracted. E-ACTIVE BODY CONTROL in the GLE also has the curve inclination function CURVE: Like a motorcycle, the GLE leans into bends and thereby allows cornering in three stages with practically no centrifugal force. If the GLE is equipped with a stereo multi-purpose camera, ROAD SURFACE SCAN becomes possible: the camera continuously scans the road surface, the suspension responds in advance to any undulations before they are the vehicle drives over them, and they are substantially compensated.