A four-door sports car has been added to the new BMW 8 Series range. With its standalone body concept, plus powertrain and chassis technology designed squarely to engender supreme dynamic ability, the new BMW 8 Series Gran Coupe embodies a brand of sporting flair unique in the luxury segment.
Joining the BMW 8 Series Coupe and BMW 8 Series Convertible as the third model in the 8 Series range, the Gran Coupe has a character all of its own, combining smile-inducing performance and design shaped by dynamism and elegance with significantly increased spaciousness for passengers in the rear seats. Meanwhile, exclusive equipment features and the latest innovations in the areas of control/operation, driver assistance and connectivity represent a case study in modern luxury. The new BMW 8 Series Gran Coupe is the only model in its segment derived directly from a two-door sports car. Its resultant dynamic potential, plus a longer wheelbase and model-specific chassis tuning, create an unmistakable balance between sports performance and ride comfort. All of which means 8 Series Gran Coupe customers can look forward to high levels of everyday practicality and mile-covering ability.

The combination of precisely drawn lines and expansive surfaces that runs like a thread through the BMW brand’s new design language helps the exterior of the new BMW 8 Series Gran Coupe to strike a unique balance between dynamism and elegance. The four-door coupe concept has been translated into a body of standout pomp and progressiveness. 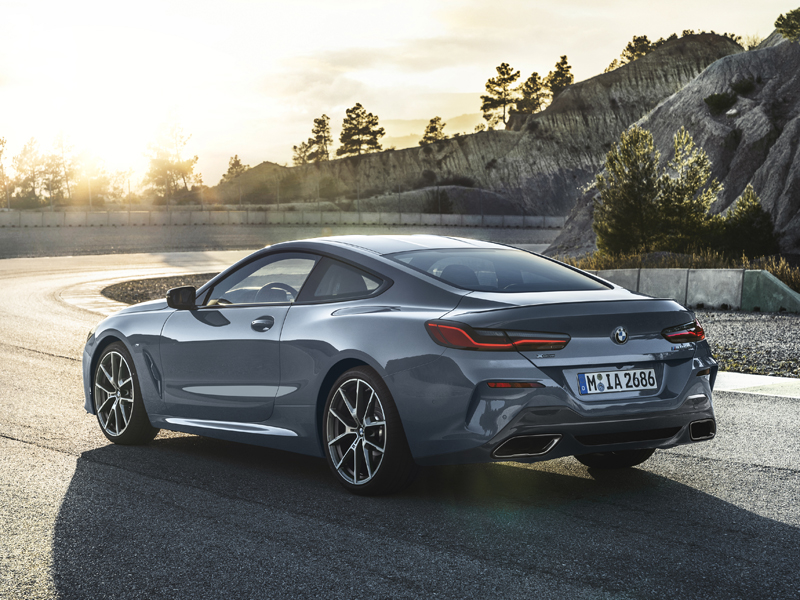 As well as its distinctive proportions, the design of the new BMW 8 Series Gran Coupe’s flanks and rear end also clearly distinguishes it from its 8 Series stablemates. Because the windscreen frame is more upright, the roofline is also higher, meaning additional headroom in both the front and rear. The roofline merges into the tail in a graceful sweep, via a fin-shaped transition in the vicinity of the C-pillars that emphasises the elongated silhouette. The rear window, meanwhile, also follows a slightly steeper line in order to produce a larger boot aperture. An additional character line accentuates the sweeping elegance of the body and powerfully flared surfaces integrate pronounced shoulders into the overall effect. The side window graphic reaches its conclusion at the rear in another hallmark BMW design cue. On the new BMW 8 Series Gran Coupe, the counter-swing at the trailing edge of the side window graphic – the Hofmeister kink – is very upright in form, further emphasising the solidity of this area of the body. The powerfully flared wheel arches and wide track also play a defining role in the form of the rear end. Horizontal lines and sculptural surface contours give the tail a broad but also light appearance. The slim all-LED rear light clusters extend deep into the flanks. And twin exhaust tailpipes with a trapezoidal contour are positioned either side of the rear apron’s lower section. The distinctive style of the new BMW 8 Series Gran Coupe is also expressed in the design of its interior. The driving experience in both the front and rear is defined by a flawless symbiosis of dynamism and luxury. The extra length of the wheelbase and generously sized door apertures give passengers in the rear unprecedented legroom for a BMW coupe – and they are able to get in and out more easily than ever as well. Those in the rear seats also benefit from substantially greater shoulder room and headroom than in the two-door version of the new BMW 8 Series, making the second-row seats even more comfortable to travel in. The optional panoramic glass roof helps to give the interior of the new BMW 8 Series Gran Coupe an exceptionally light-filled feel. It is particularly generous in width and its glass surface area measures around 1.5 square metres. The result is an unbroken glass surface extending from the windscreen to the rear window. The front section of the roof and the interior blinds open and close at the touch of a button or with the radio remote control, delivering a controlled supply of fresh air. The rear blind can also be opened and closed from the rear compartment.

The imposing power delivery of the 4.4-litre V8 engine in the new BMW M850i xDrive Gran Coupe is accompanied by a character-rich soundtrack further amplified by the M Sport exhaust system. With its maximum output of 390 kW/530 hp and peak torque of 750 Nm (553 lb-ft), the new V8 engine in the BMW M850i xDrive Gran Coupe accelerates from 0 to 100 km/h (62 mph) in 3.9 seconds.