To mark the discontinuation of the Mercedes-AMG G 65 AMG is offering an exclusive Final Edition, limited to just 65 examples worldwide. The particularly expressive Final Edition reflects the successful story of the world's most powerful series production off-roader. More than a third of all G Class vehicles sold worldwide originate from AMG.
The AMG 6.0-litre V12 engine generating 463 kW (630 hp) is totally self-assured. With a maximum torque of 1000 Nm at 2300-4300 rpm, the top-of-the-line V12 engine boasts a unique combination of drive dynamics and smooth running characteristics. The G 65 Final Edition accelerates from 0 to 100 km/h in 5.3 seconds and reaches a top speed of 230 km/h (electronically limited). The V12 biturbo engine with its superior response and powerful sound is unquestionably a highlight in the long, successful story of petrol engines and features a host of top-class technical details. Alongside twin turbochargers it boasts a multi-spark ignition with twelve twin-spark ignition units plus a particularly effective engine management system. The results are optimum combustion, accomplished comfort, maximum efficiency as well as outstanding levels of refinement and power delivery. The high-quality carbon-fibre/aluminium engine cover rounds off the package visually. The AMG SPEEDSHIFT PLUS 7G?TRONIC automatic transmission takes care of the transfer of power to all four wheels. Expressive exterior, high-quality interior
The sporty appearance of the dynamic exterior designof the G 65 Final Edition is underscored by large 21?inch 5?t win-spoke light-alloy wheels in bronze, silver brake callipers and AMG Sport trim strips on the sides. Additional highlights come courtesy of features retained in matt bronze such as the underride guard, the trim elements in the bumpers, the wheels and exterior mirrors plus the spare wheel cover in obsidian black with appropriately designed insert. These are complemented by the radiator grille with black mesh screen and surround painted in matt bronze. Running boards and tailpipes are retained in matt black. Inserts in the exterior protective strips in high-gloss black complete the look. 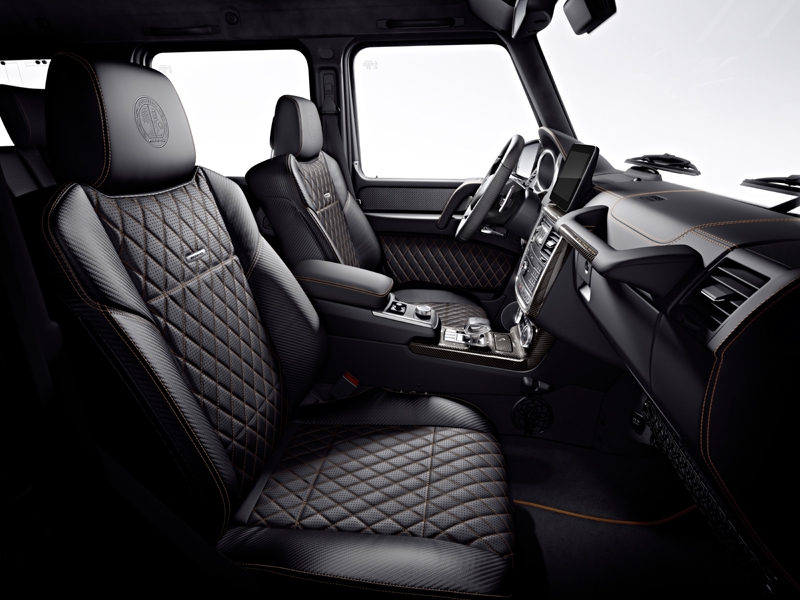 This special model also has a high-quality interior design: the scope of equipment includes the designo Exclusive package in designo black nappa leather with seat side bolsters in a carbon-fibre look and topstitching in light brown. Carbon-fibre trim elements with decorative stitching in bronze, the milled Edition lettering in the grab handle plus floor mats with leather edging and topstitching in light brown round off the look. The driver sits behind an AMG Performance steering wheel in black nappa leather featuring a flattened bottom section and excellent grip. Driving is particularly comfortable thanks to the Seat Comfort package including multicontour seats and climatised seats for driver and front passenger. An off-road legend since 1979
The G-Class has been the top model among luxury off-road vehicles since 1979. It is not only by far the passenger car model series with the longest production run in the history of Mercedes-Benz, but also the forefather of all SUVs to bear the three-pointed star – this is why all Mercedes off-road models feature the upper-case G in their name. Like the entire model series, the G 65 Final Edition will be produced in Graz, primarily in the hand-finishing section of the production facility.

AMG brought a G model onto the market as early as 1979. This was followed in 1999 by the G 55 AMG. Its V8 engine produced 260 kW/354 hp. Although the eight-cylinder engine with a displacement enlarged to 5.5 litres adopted the three-valve technology and dual ignition of the series production unit, it also offered high torque of 525 Nm from 3000 rpm alongside significantly increased output. The G 55 AMG was available with closed roof in short- and long-wheelbase variants and as a cabriolet with a short wheelbase.

In 2012 the family tree was extended. As part of a very comprehensive facelift, the G?Class was given a completely new exterior. Affalterbach also made some powerful refinements and launched the G 65 AMG into the mix. It incorporated everything the performance-hungry fans of the off-road icon had been dreaming of – such as a 6.0?litre 12?cylinder engine with carbon-fibre/aluminium cover. Generating 1000 Nm, the G 65 AMG became the most powerful series production off-road vehicle in the world. The G became an ultra-modern legend, which has since delighted a growing community of fans.