The new face of the Q family!

The Audi Q8 combines the spaciousness and ergonomics typical of an SUV with the elegant body line of a four-door coupé. Richly equipped, comprehensively connected and tough enough for off-road duty, it is a composed companion for business and leisure.
Versatile, sporty, elegant: the dimensional and space concept
The Audi Q8 exudes sporty dynamics and upscale prestige like no other SUV from the brand with the four rings. 4.99 meters (16.4 ft) long, 2.00 meters (6.6 ft) wide and 1.71 meters (5.6 ft) tall, the SUV coupé is wider, shorter and lower than its Q7 sister model. With a wheelbase of nearly 3.00 meters (9.8 ft), it offers a spacious interior that beats that of its direct competitors in most relevant dimensions, including interior length and headroom. The three-seat system in the rear can be slid forward and backward as desired. With the seat backrests folded down, the luggage compartment under the power rear hatch holds up to 1,755 liters (62.0 cu ft). 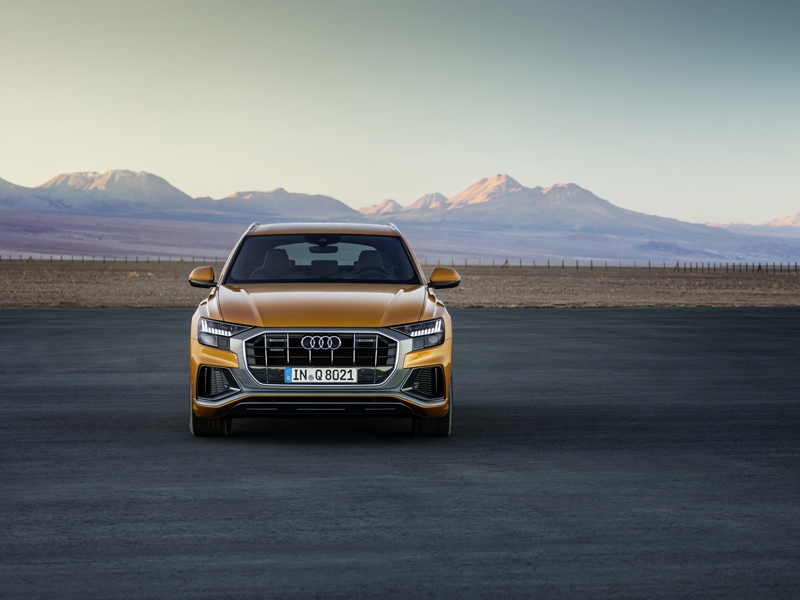 New presence for the Q family: the exterior design
With the imposing Singleframe in octagonal design, the Audi Q8 is the new face of the Q family. The brawny radiator grille stands upright and, together with the spoiler that has been drawn toward the front and the large, highly contoured air inlets, emphasizes the selfconfident look. The elegantly sloping roofline terminates in gently inclined D-pillars and rests against the quattro blisters above the wheel arches, which house up to 22-inch wheels. Numerous details echo the design of the Ur-quattro. Strong contours and athletically tight surfaces convey a feeling of power, sophistication and the special dynamics of permanent all-wheel drive. The spoiler, wheel arch trims, door trim strips and diffuser are in a contrasting color, to further emphasize the off-road look.

Standard LED headlights illuminate the road, with HD matrix LED technology available as an option. Here both the three-dimensional signature of the daytime running lights and the taillights have a digital character. A light strip connects the units at the rear. As in the Audi Ur-quattro, a black surface underlays this strip. Q8 owners can use the myAudi app on their smartphone to activate various lighting functions and experience them from the outside. 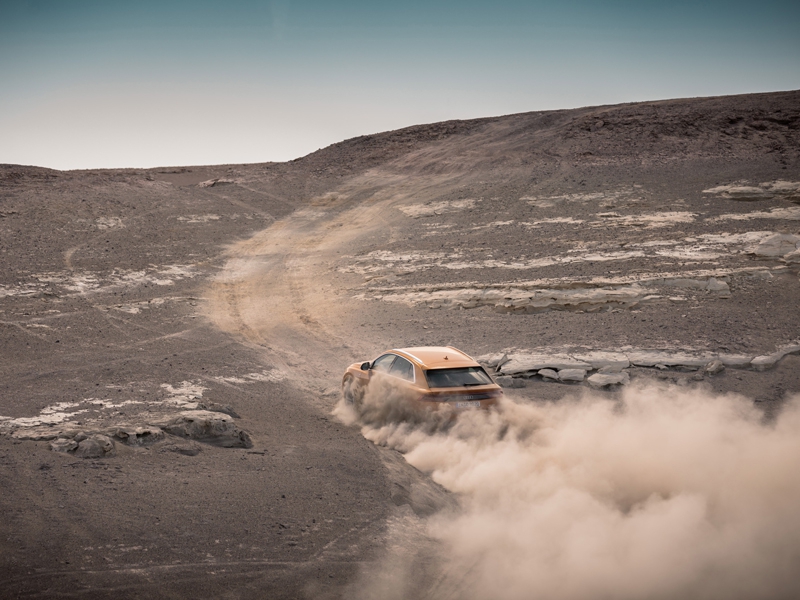 Sporty driving experience: suspension and drive
With as much as 254 millimeters (10.0 in) of ground clearance, short overhangs, quattro permanent all-wheel drive and hill descent control, the Audi Q8 can keep going when paved roads end. The suspension with damper control is standard. Audi MediaCenter * Figures on the fuel consumption and the CO2-emissions vary in case of given ranges depending on the used combination of wheels/tires 3/24 Audi offers the adaptive air suspension with controlled damping as an option, with either comfort or sport setup. It adjusts the ride height depending on the driving situation and the driver’s preference by as much as 90 millimeters (3.5 in).

The Audi Q8 accelerates from 0 to 100 km/h (62.1 mph) in 6.3 seconds on its way to a top speed of 245 km/h (152.2 mph). A fast and smooth-shifting, eight-speed tiptronic transfers the power to the quattro drivetrain. Two further engine versions will follow at the beginning of next year.
All drive systems are particularly efficient thanks to the new mild hybrid technology (MHEV). The 48-volt main electrical system incorporates two important technology modules: a lithiumion battery and a belt alternator starter. During braking, it can recover up to 12 kW of power and feed it back into the battery. The MHEV technology enables long coasting phases with the engine deactivated and a start-stop range that begins at 22 km/h (13.7 mph). In customer operation, it reduces consumption by up to 0.7 liters per 100 kilometers. 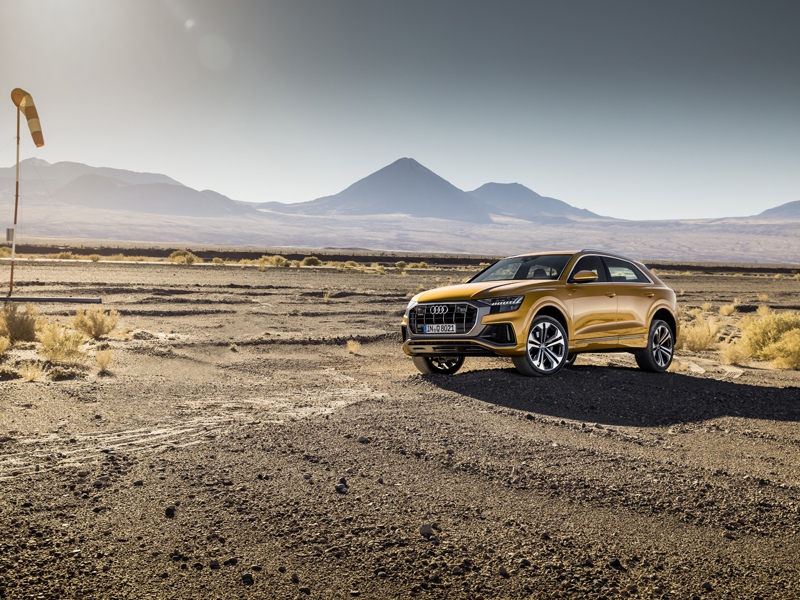 Clarity is the new premium: the interior
Easy-to-understand symbols stand for the digital precision from Audi and for the high level of integration of architecture and operation. The central element is the top MMI touch response display. With its black-panel look, it almost dissolves into a large, black surface when switched off. All elements refer logically to one another, from the flat air vent strip to the wide console on the center tunnel bearing the tiptronic selector lever. In the dark, the contour light traces the distinctive design lines of the interior and provides backlight for the three-dimensionally lasered quattro badge above the glove compartment – an example for the love of detail at Audi. Options including customized contour seats with massage function and ventilation, four-zone automatic air conditioning and the air quality package with fragrancing and ionizer further enhance the elegant ambiance. 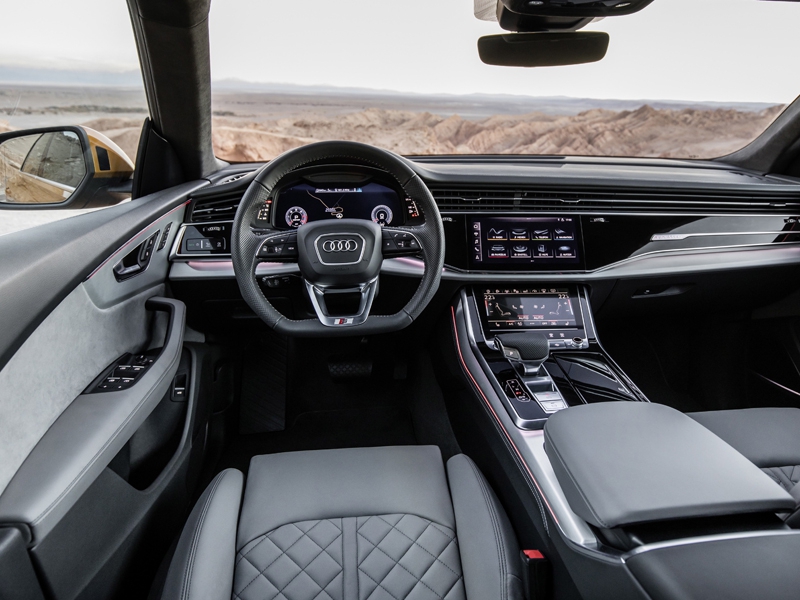 Sensitive and concise: controls and displays
With the MMI touch response operating concept of the new Audi Q8, nearly every function can be accessed via two large displays. The upper 10.1-inch display is used for controlling the infotainment and the navigation system. The driver uses the 8.6-inch display below that for heating and air conditioning, convenience functions and text input, the latter with his or her wrist resting comfortably and ergonomically on the selector lever.