NECKER HAS BEEN DEVASTATED!

Few billionaires find themselves homeless, but Richard Branson has no roof over his head. His house on Necker, in the British Virgin Islands, was ripped apart by Hurricane Irma three weeks ago. “Everything has been devastated,” he sighs. He and the 70 staff who run the island for his family, their guests and the clients who pay up to £60,000 a day to rent the place cowered in the cellar for 11 hours — and got stuck into the wine, just in case it was their last night on earth. “The storm was so strong, even our concrete bunker was shuddering,” he says. When they did finally venture outside, “it looked like a nuclear bomb had hit the island”.
Along with some of the buildings, all the furniture, half the trees and most of the nesting birds, all of Branson’s clothes had blown away, which explains why he arrives at Virgin’s office in Greenwich Village, New York, wearing the worst pair of oversized, faded “dad jeans” anyone, let alone a rich fella, has ever worn. “It’s all I had left,” he blushes. One of his office staff quickly rustles up a box-fresh indigo pair.

The 67-year-old has buccaneered his way to a £4.8bn fortune by creating Britain’s first and only global lifestyle brand. He started with music and moved on to airlines, trains, hotels, gyms, mobile phones, even a bank. He picks fights with powerful “monopoly” vested interests, notably British Airways, which has left him teetering on the brink of bankruptcy more than once, as he reveals in his new book, Finding My Virginity. But his “screw it, let’s do it” attitude and relentless optimism have seen him through and made him Britain’s best-loved entrepreneur. In 2015, he was voted the businessman we’d most like to see as prime minister. 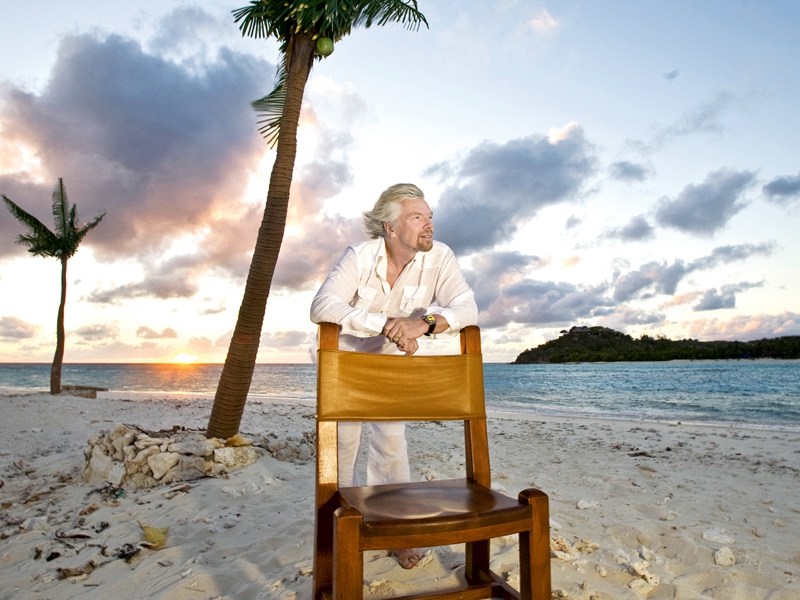 He sits down at his desk in front of a giant image of Necker before the storm, brushes his grey-flecked mane off his face and demands a “Marshall Plan” to rebuild the BVI. “The whole nation has been wiped out. I’m speaking to the prime minister, builders, tour operators, yacht operators. We’ll be donating money to get the BVI back to their magical best.” He wonders:

“Is this climate change? The sea is much warmer this year, so it could be. We haven’t had a hurricane for 10 years and yet we’ve just had three in three weeks.” He proceeds to take on the most powerful man in the world in his home city, even though it risks harming his vast US business interests. He describes his first head-to-head with Donald Trump in Trump Tower before he became president as “the worst, most dispiriting meeting I’ve ever had with another businessman”. He believes Trump “will do himself in, without the world having to do it for him” — and says that moment can’t come soon enough.

Branson speaks softly, almost hesitantly, thanks to a childhood stammer. But there is no disguising his fervour — nor the depth of the rare apology he makes in his book. His mea culpa is to the Formula 1 driver Jenson Button for an infamous episode in Melbourne in 2009, when he got a little too fruity with Button’s then girlfriend, the model Jessica Michibata. “I was talking to her. I was drunk. Jenson didn’t like it. I didn’t drink for six months after that night,” he says. 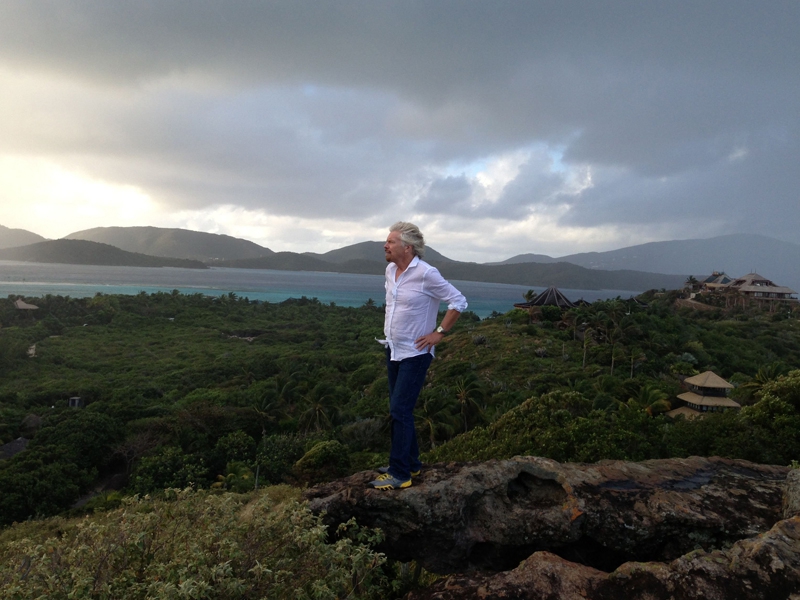 So the rumours are true? He is a bit of a lech? “No, no. I don’t hit on women. I’m going to try to make sure that everybody has fun at a party. I’ll be the first in the swimming pool — maybe carrying a woman around who won’t mind jumping in with me. But I don’t think I’ve ever — that I know of — offended a woman.” Didn’t Princess Di complain he was overfriendly? “That’s complete rubbish!” Joan, his down-to-earth Glaswegian wife of nearly three decades, tolerates what is probably best described as his rather 1970s attitude to networking.

As he glugs his third cup of tea in half an hour, Branson tells me he plans to live “for another 30 years, based on the longevity of my parents and grandparents”, as if he is drawing up a business plan. When his time is up he would like one of his two children, Holly, 35, or Sam, 32, to take over the business. The trouble is, neither seems that keen. Holly does work for Virgin Unite, the firm’s charitable foundation, but it’s scarcely a core part of the business. Sam makes documentaries. Each has a young family. Holly has two-year-old twins, Etta and Artie, and Sam has a two-year-old daughter, Eva-Deia, and a nine-month-old son, Bluey.

Branson spends more time playing the role of “grand-dude” to his grandchildren these days than partying with the shinier friends he has assiduously cultivated over the years to buff his brand. Barack and Michelle Obama may have recently added their names to those of Kate Moss and Ed Sheeran in the Necker guest book, but Branson’s focus now is on family when he returns home from racing around the world on his £33m Falcon 900EX private jet. 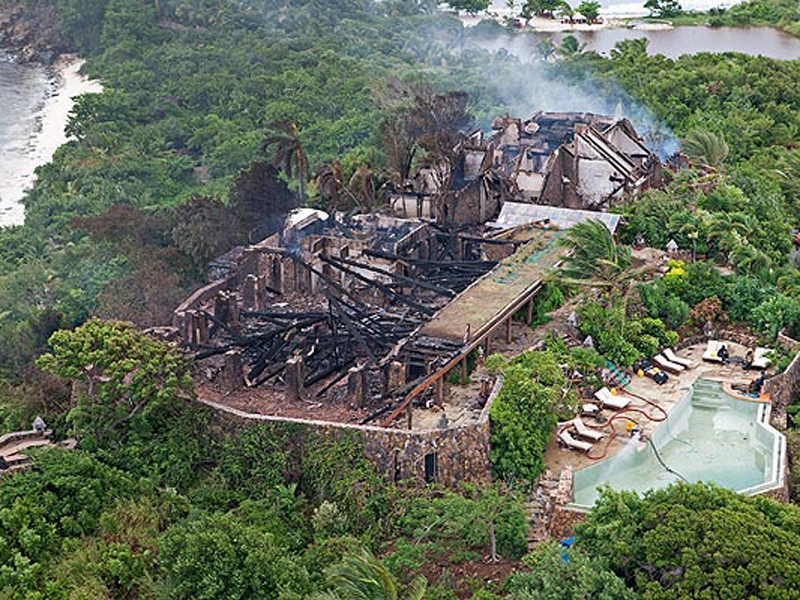 He hopes Holly and Sam will change their minds and step up one day soon. “We’re a family business. A family business needs a face,” he says. The Virgin Group comprises 65 branded companies, in 35 countries, that generate an annual revenue of £16.6bn and employ some 69,000 people. No pressure, kids. You might think Branson would now sit back and enjoy his success. But instead he is embarking on some of the riskiest endeavours of his career. Forget ballooning — this stuff could really kill him.

After “a lifetime trying to stay out of any party-political thing”, he has emerged as the most high-profile business critic of Brexit. The near 20% slump in the value of the pound after Brexit has put a squeeze on Virgin Atlantic, which he regards as his greatest creation. Aviation fuel is priced in dollars and the reduced spending power of Britons overseas means fewer are travelling. “Brexit has cost us tens of millions of pounds,” says.

He is calling for a second referendum on the terms of any Brexit deal — even though he knows it means he will be accused of being “remoaner in chief”. “Brexit is the worst thing that’s happened to Britain in my lifetime,” he says. “You make a list of all the pluses and all the minuses and the minus list just grows. Nothing that was promised by the Brexit people is going to happen, not even immigration curbs. People are beginning to realise we need people from Europe to help our economy.” He is also doubling down on his campaigns against global warming, even though he knows that, as the owner of a large airline and train company, and a keen supporter of a third runway at Heathrow and a second at Gatwick, he will be accused of sky-high hypocrisy. He admits his pledges a few years ago to run Virgin jets on biofuel and also stump up $3bn to help fight climate change were wildly overoptimistic. But he insists he has sunk “hundreds of millions of dollars” into research into green energy — “and lost a lot of it”.

Then, of course, there is the big challenge — the venture that will soon have cost him more than any other in financial terms, more than £650m, and has badly dented his reputation. “The world needs space. We’ll get there,” he insists.

After more than a decade of delays and two accidents that killed three people on the ground and one test pilot in the air, he insists he himself will travel into space on his new Virgin Galactic aircraft, Unity, “most likely in the middle of next year after our first test flight into space in December or January”.

He’s probably right that space travel will be commercialised. His first 700 customers, Justin Bieber among them, have paid up to £180,000 each for their tickets. Branson thinks fares could drop to less than £30,000. He also believes it will be possible, in his lifetime, to fly “hypersonic” through space from London to Sydney in a couple of hours. Boldly going where no boarding-school dropout has gone before is a cosmic bound for Virgin. Taking on Nasa, the Russians and the Chinese is a world away from tweaking BA’s tailfin. After the accidents, critics said the only thing Branson would fire into orbit is his giant ego. He insists he is no space cowboy — and reminds me that the official independent report into what destroyed SpaceShipTwo in mid-air found it was not ego but pilot error. “We’ve got nearly 800 engineers, some of the best teams. We’re building four spaceships. We don’t give up. We’ll prove to the world that we can create something extraordinary” — and extraordinarily profitable, if it works.

Space is not the only airborne headache he has. A disorderly departure from the EU could make it hard for Virgin Atlantic to sell services to EU nationals. The airline needs a bigger presence on the Continent. That’s why he recently announced he is selling 31% of the carrier to Air France-KLM, reducing his stake to just 20%. Delta already owns 49%.

On my flight to New York to meet Branson, one of his cabin crew told me she was worried she would soon be wearing the blue uniform of Air France-KLM, rather than Virgin’s trademark red. Many travellers who are shunning BA for its strikes, shoddy service and for axing free G&Ts on short-haul flights will also fear that Delta and Air France-KLM will soon swallow Virgin Atlantic whole. Not a chance, Branson pledges.

“We have a 25-year agreement that ensures the Virgin Atlantic brand will continue for at least the rest of my lifetime.” He remains president of the airline.Assuming he survives his first space ride, the biggest danger for Branson is that he will cease to be the scrappy man of the people busting monopolies, but, rather, a bit of a Goliath himself. He insists he’s still a David. He will soon open two new Virgin hotels, one in San Francisco and one in New York, to challenge the Hyatts and Marriotts of this world. His next target is the big cruise-ship firms: Royal Caribbean, Norwegian and Carnival. “We’ll launch Virgin Voyages in 2020. We’re really going to shake that industry.”

Given the age of some of the people who go on cruises, perhaps he could flog Virgin care homes and funerals on board. Virgin Death has a certain ring, I suggest. “We haven’t moved into that — yet.” He pauses and thinks of another way of exploiting the business opportunity. “But we may soon be sending your ashes to space.” Just as soon as he has a roof back over his head.