The last time we caught up with Jose Mourinho we accompanied him on a private jet to the edge of the Arctic Circle for a spot of ice driving. That was a while ago, and he was – controversially – between jobs. Down time for Mourinho, it turns out, is a waste of time, even when he’s on full opposite lock across a gigantic frozen lake. This is a man who likes to keep busy. His mobile phone was practically welded to his ear. A master of media manipulation, our conversation was liberally sprinkled with clues as to his likely next managerial destination. Enough clues, in fact, for the story to get picked up worldwide.
He certainly cuts a less restless figure today than during our previous encounter. Mourinho is a study in contained energy, someone who gives you his full attention if he thinks it’s worth doing so, and an engaging conversationalist. Not least because for this man, the world does not revolve entirely around football.

Do you ever just go for a drive for the hell of it?
Jose Mourinho: I drive in Portugal. When I land in Lisbon, I have a driver to bring my car to the airport, and I will go for a drive. The police control is totally different. In Portugal, I’d have to do something really bad to be punished. But in England, I’ve been caught doing things like 48mph in a 40, and they take my licence for a couple of months!

Sir Jackie Stewart once told me that his favourite car was the one that had a chauffeur in it.
In England, I’m basically here to work. So I like to be driven. I like the comfort of the Jaguar, one of my friends describes it as a mobile apartment. I leave the house at 7.45am and I have 45 minutes to do what I need to do. And after a match, if I have time, I like the drive to London. More traffic, less traffic… I don’t care. I like the feeling of disconnecting from the world. It’s like a private jet for the road. 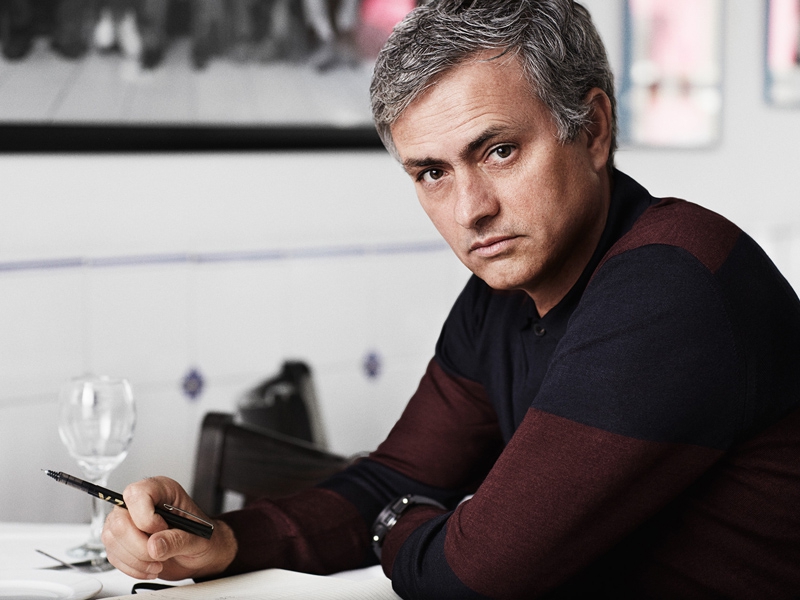 How are the people treating you in Manchester?
Too good. Too well. So well that it’s almost putting a limit on my social life. People want pictures, autographs, they want to talk to me… Even in a city where there are other clubs, I have never felt this before… Man City fans, there are Liverpool and Everton fans not far from here, but I never have any kind of hostility. The people are really great.

Is this because you’re one of those figures in sport who has attained a celebrity beyond the world you’re in?
I am recognised in the four corners of the Earth, in every stadium in the world there will be some reaction from the fans. It normally starts with an insult – or a song. For me to sit down, or perhaps… to do other things [smiles]. But I just wave and in the end they are happy, and then they want a picture. So I feel good among the football lovers around the world. During the game, they don’t like me, maybe they fear me or fear the team, but before or after the match it feels good.

You have become an iconic figure, a style leader. Who else, in your opinion, gets it right?
The people who get it right are the ones who feel good with themselves. I think I am an icon without being an icon. I am an icon for feeling at ease with myself. For me, that is the best concept of an "icon". You don’t care what other people think, or what they say, you just care about the way you feel. To be ready and adapted for a specific moment. I can name a few people who always seem… correct. I met Sir Sean Connery in the street once. What class. He wasn’t going anywhere special, but he was just so natural. I think the guys who are older than me have that. Maybe more than the new kids in town. For these kinds of people, the clock never seems to stop. De Niro, Pacino. These are stars forever. Sir Michael Caine. These days, people come and they go. I have my doubts that the new generation will last in the same way. They appear, they conquer the world, they disappear again. Then next year another big star arrives. 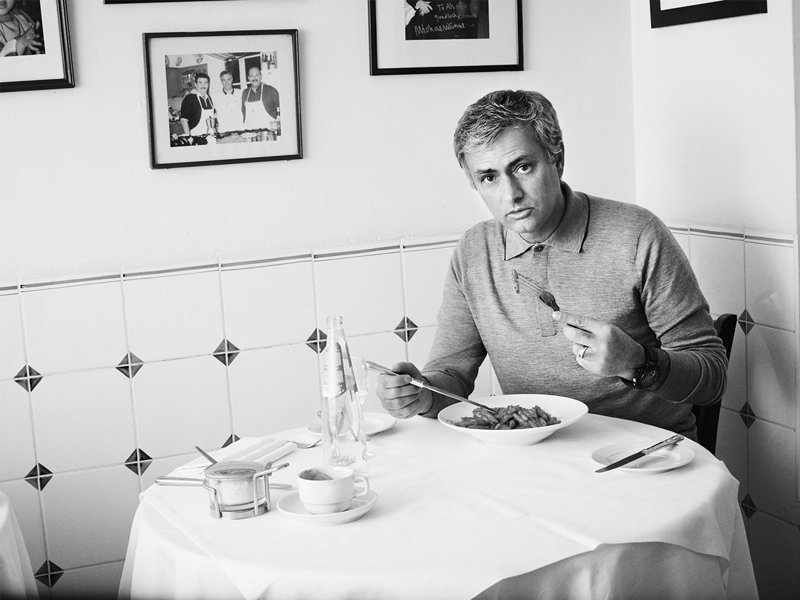 One thing that always fascinates me is the way in which so many great figures can be reduced by an equally great flaw. George Best, for example, a sportsman and a cultural figure of huge power and talent. How would you have coped with him?
It is difficult. For me, as a manager it is not easy to fight the nature of people and the nature of things. Football players are with us four or five hours a day, and the day has 24 hours. The other 18 or 19 they have family, friends, they have hypothetical friends, they have people that surround them, people that perhaps don’t help them. It’s very difficult to control that. You try to have a positive influence, but to turn their nature around and control them totally, I don’t think we can. Every one with a super talent, they probably have this other side. People with great talent can have weaknesses. You have to be lucky. With someone like George Best… I never saw him play live, but I know so much about him, and I remember so many things. People like that, they come to our Earth, they have a lifespan, they leave this incredible mark. It’s often said that they leave us too early, but look at what they left…

Speaking of which, do you ever think about your legacy?
I have a big legacy. But there is one thing that’s really important to me: I changed the life of Portuguese managers. After 2004, when I started conquering my space in the world of football, the Portuguese managers started to have something they never had, a little bit of credibility, a little bit of opportunity. The doors opened. Now they are all over the world.

‘If you only know about football, you don’t know about football.’ This is one of your beliefs, right?
Yes. This is my quote. But it’s something a teacher told me when I was 17 or 18. I was in high school, and he was a philosophy teacher. I was not interested, and he could see my mind was elsewhere. So he stopped the class and said, “hey, Mr Mourinho, what’s going on? No attention, no concentration, I am speaking to the walls.” I told him, “I want to be a football manager, not a philosopher.” He told me, one day you’ll realise that philosophy will be as important as physiology, biology, statistics… you ignore psychology, you don’t respect my classes. Don’t forget this.’ And he was right. Now, I think managers understand this. But I understood it 25 years ago… 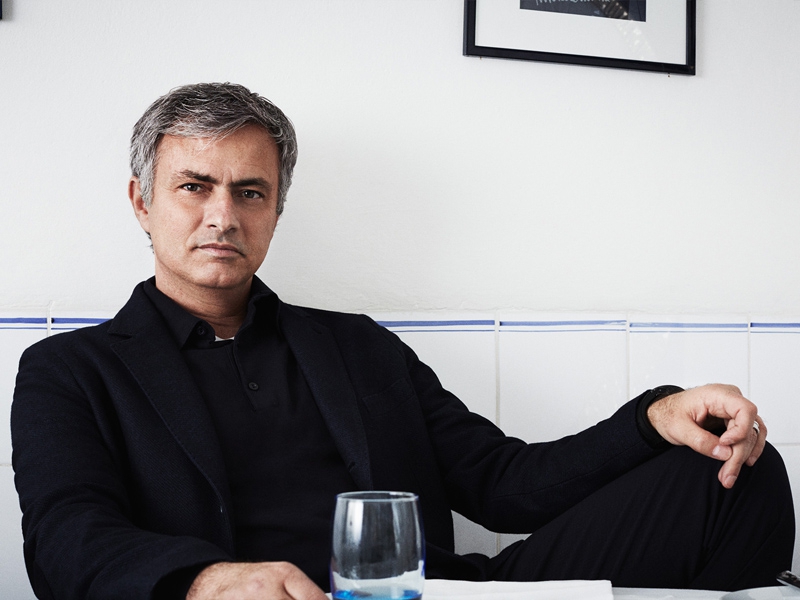 How does it apply to your style of management?
The more you know in general, the more it can help you, even with things you think don’t play a role. You need as a manager, in my opinion at least, to be able to speak as many languages as possible, to create a certain empathy. Look, I don’t speak German, but I can say a few words. And those few words create that empathy, start the relationship. I don’t speak Swedish but I talk to Zlatan [Ibrahimovic] in Italian. If I go to a Champions League match or a Europa League match, and I’m going to play in Ukraine, if I understand a little bit better about things that are happening there, I can go to the press conference and have a different sensibility. I can answer questions in a more intelligent way. Every gram of culture or knowledge that you have… it’s not a burden. It’s one more gram of knowledge but it is not a burden. Ultimately, it will play in your favour, and improve your performance. I don’t necessarily want to be more clever than others. But I do care about the details.

You’ve said that you’re not as concerned as some of your colleagues about the Chinese Super League vastly inflating player’s wages…
No, I share the concerns. If you are negotiating a new contract with one of your players, and you offer him £5m per year and they offer £25m, then you have a big problem. Maybe the player takes £5m because he prefers football. Or £25m because he prefers money. I have already refused a big offer to go to China, but I don’t criticise anyone who decides to do it. It’s their choice, their life. Only they can decide what they need for their future. Other managers in the Premier League have been critical, but I am no critic. I am worried, because they can offer contracts that are impossible to offer in Europe. But in the end the player who wants to go is a player that maybe you don’t want to keep. Imagine the guy who is 24 or 25, and he wants to go? At 24, or 25? OK, goodbye, be happy… The player who is 31 or 32, and they go for a few years and then come back with a bank account full, OK. But when they are young and they have a chance to be in the best competitions, and they still decide to go, well maybe it is better that they go. 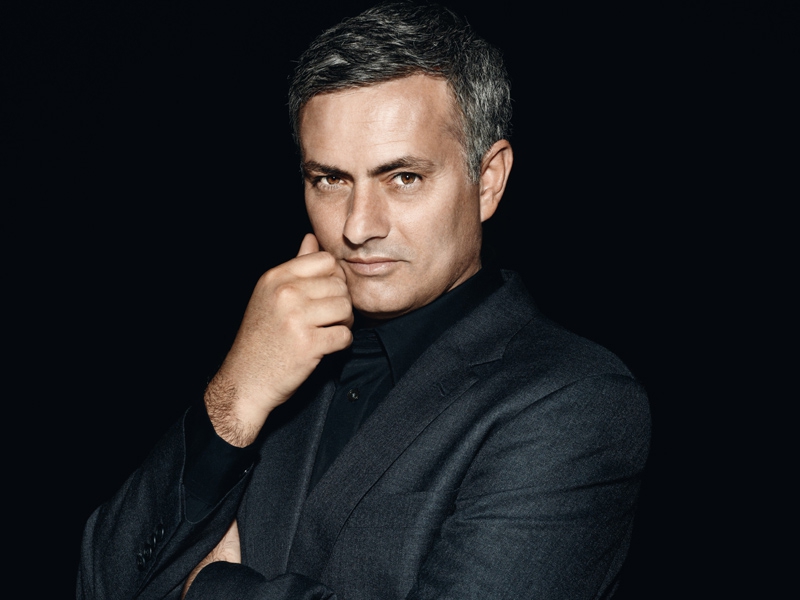 How important are big personalities for the game?
On the pitch, it is fundamental. If you are speaking about the right personality, about a guy who wants to be a leader, wants to take responsibility, who is self-confident, there is a penalty in the last minute and they want to take the penalty. A team that is losing the game 1-0, give me the ball and I start organising, who has an obvious desire to win, who can play through the pain even if he’s injured. If I could have eleven of these personalities, I would have eleven of them!
Tags
SportBusiness
Share