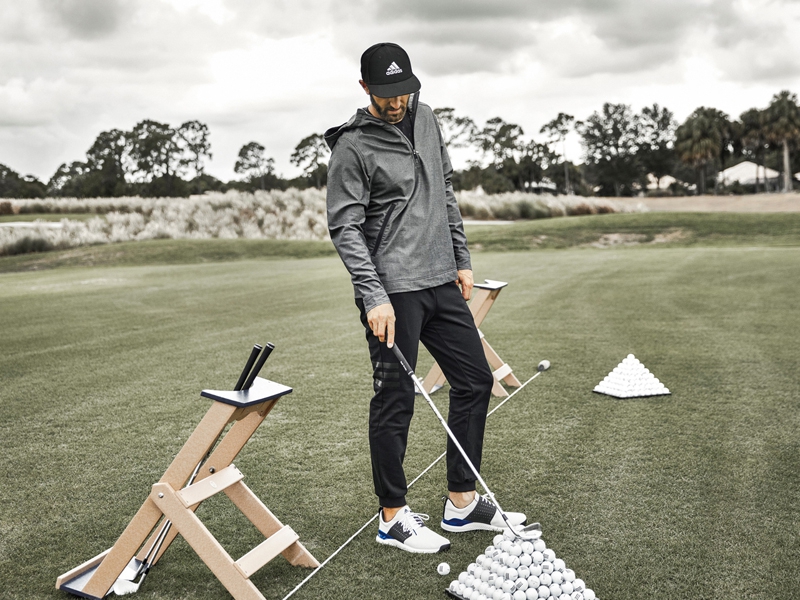 “Even the past, however-long, 33 years before that,” the 34-year-old Johnson told Life Beyond Sport in a 30-minute one-on-one interview. “It was time to grow up, pretty much was the best way to sum it up.”

You’d tend to think a 34-year-old, world-class athlete such as Johnson – a top talent with model looks, a beautiful wife and plenty of money and toys – might not have stress in his life, but Johnson did, and he had trouble releasing it. Johnson describes himself as laid-back and non-confrontational, and when things bothered him, he often kept it inside, to himself.
DJ: “My goal, and that’s kind of me and my game, I try not to get too emotional, whether it’s going really well or going really bad. I’m just trying to stay focused. And I think I did that with life, too. I did the same thing, always tried to stay on an even keel – which is great for golf, but it isn’t always great for life. Eventually, the stuff just built up.’’

“Honestly, I knew I wasn’t happy, but until I started talking through it and working with some of the people that I did, I didn’t really realize it. So that’s been a huge help, a huge relief, understanding that.” 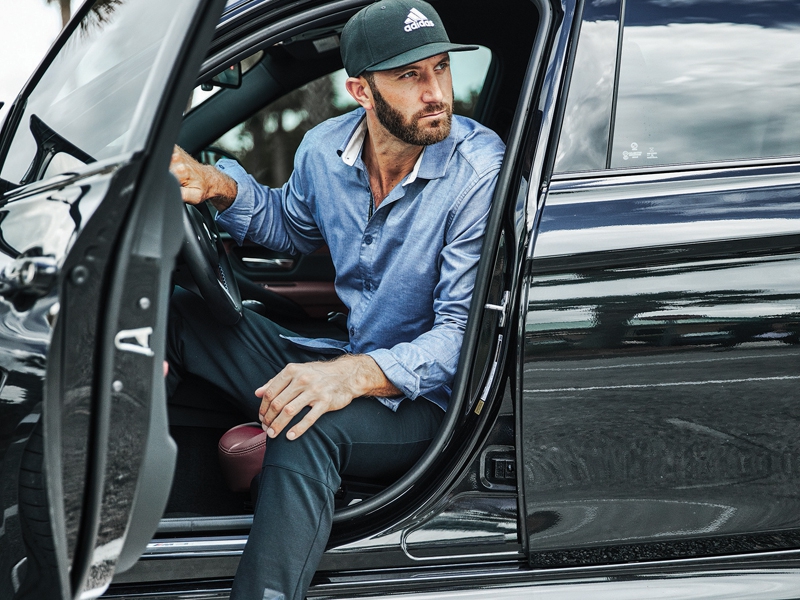 For months, he and Paulina have been renting a home at Sherwood Country Club in Southern California, where the two live close to her parents, hockey great Wayne Gretzky and actress Janet Jones. He’s had a nice daily routine at Sherwood. He and Paulina head to the Gretzky house for breakfast each morning, Dustin heads off to work out and then joins Wayne for golf at roughly 11:30. Johnson said his golf game is in nice shape; he tuned it last month with a quick flight to Las Vegas to visit his instructor, Butch Harmon. He’s even whispered to those close to him that he’ll be ready to win his first time out. Asked about the prediction, he laughs.
DJ: “I’ve been working hard on it, working hard on my fitness. I’m feeling good,” he said. “Golf is a funny game, so I can’t go out and say ‘I’m going to win this tournament,’ but I just want to compete and put myself in position to have a chance.” 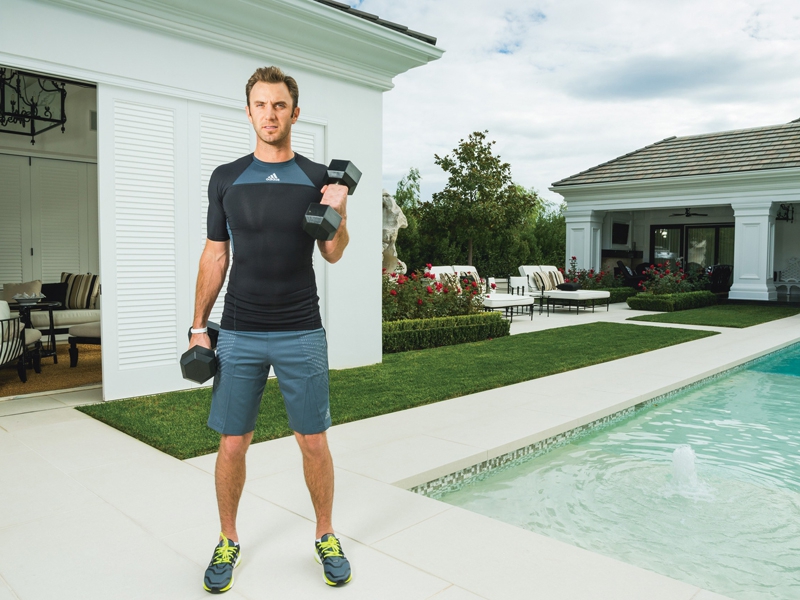 Because time was limited we quickly jumped into a Q&A with Dustin to find out more about his childhood, personal life and playstyle.

Q: You've had great seasons over your career. What are you working on to keep that going?
DJ: I'm working a lot on posture, setup and takeaway — staying real stable. I'm really tall [6'4'], so things can get moving around all over the place [in my swing], and that's when I don't hit it very well.
Q: Do you have trouble finding equipment to match your size?
DJ: Well, I wear an extra large glove and a size 13 shoe. But Adidas send them to me, so I don't have to worry about finding them. Thirteens are difficult to find in any shoes — I've always had to order them.

Q: You're known as one of the hardest swingers on tour. Have you ever broken a golf ball?
DJ: I've never broken a ball, but I have broken a clubface, back when the technology wasn't as good. I don't know my exact clubhead speed, but I think it's somewhere in the 120s.

Q: What did you learn from dealing with your recent DUI?
DJ: Obviously never to have an alcoholic beverage and drive. It was a good lesson. And talking to the guys on Tour, my friends, all the TaylorMade guys, they've all been very supportive. I think everyone realised it could've been them. I was very fortunate that no one else was involved.

Q: Do you still have your license?
DJ: It got suspended for about 30 days, but I've got it back. I haven't been to court or anything like that.

Q: We learnt about your basketball skills from a March issue of Sports Illustrated. Do you still play?
DJ: My brother and I play some, but he can beat me now that he plays in college. It used to be that he didn't have anything on me, but now he's just as big and maybe a little stronger, even though he's three years younger. I can't dominate him underneath anymore. 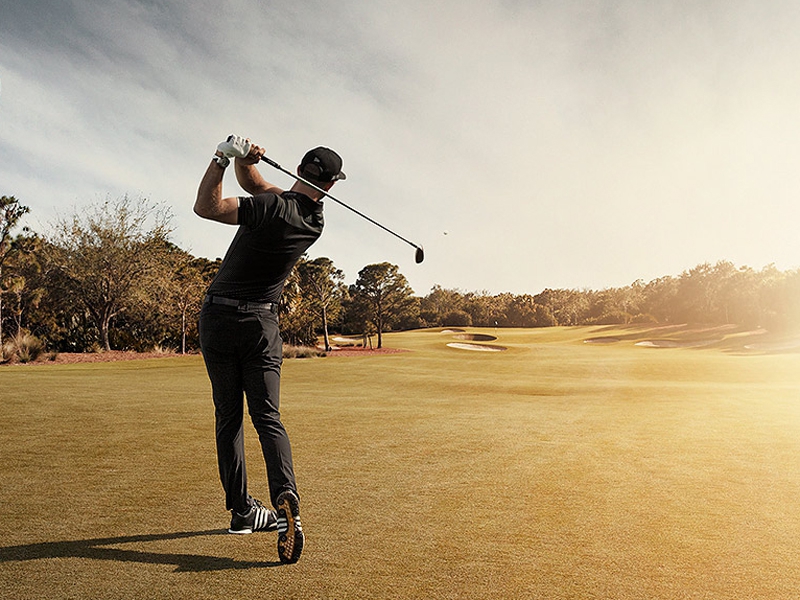 Q: So b-ball obviously runs in the family.
DJ: My grandfather, Art Whisnant, was very good. He's in the Hall of Fame at [the University of] South Carolina. He was 6'4" — a small center — and he was just mean. He may have been small, but he could jump out of the gym. He only played three years because they had a freshman team, but I think he's still eighth all-time in scoring for the Gamecocks.

Q: As a 17-year-old, you were forced to buy bullets that were used in a gang murder. How did you get mixed up in that?
DJ: I got pulled into a bad situation. I was a young kid. I had no idea what was going on. Stuff like that happened and made me realise I’ve got to be real careful about the decisions I make. Like I can’t just hang around with hooligans.

Q: How close were you to going down the wrong path?
DJ: I don’t think I ever was. I never, ever thought I was a bad guy. I just got into a situation where I felt very intimidated, and made a couple of bad decisions. I’m a pretty smart guy. I know the difference between right and wrong. I wish it had never come to something like that, but I just got pulled in.

Q: Did you feel your life was out of control?
DJ: No. Never. I always knew I wanted to play golf and go to college. I try hard to be a positive role model, especially on the golf course. I try to carry myself well, and don’t do anything outrageous. I try to play the game like a gentleman and give everyone respect. That’s how the game should be played.

Q: Who were your heroes?
DJ: I was a big fan of John Daly. And Freddie, Tiger and Phil. Freddie’s swing is so smooth and beautiful. As a kid I remember John Daly bombing it around St. Andrews in 1995 to win the British Open, and people say we are similar in a lot of ways.

Q: When and where did you first experience the game?
DJ: I started playing in South Carolina, where my dad was a golf pro growing up. So he introduced me to the game. Growing up I used to play golf, baseball, basketball and soccer, so golf was more of a summer sport but as I got closer to High School I concentrated on golf more.

Q: Did you take to the game straightaway and did you take lessons?
DJ: No, I just played and picked it up. My dad would check me out whenever but a lot of it would be picked up by watching professionals and the better players at the club and of course my dad.

Q: Where do you play regularly and are you a member?
DJ: Back home in Florida I’m a member at The Bears Club, which is my main club but I am a member at a bunch of clubs.

Q: What type of course do you prefer? Links, parkland, desert, water hazard courses like those in Florida?
DJ: Parkland I guess, but I like all courses.

Q: Who is your favourite pro to play with?
DJ: I’m playing with Jordan Spieth a lot, he is a good buddy and I like playing with him.

Q: Do you play with the opposite sex and do you like it?
DJ: Yes I do, I enjoy it.

Q: There’s nothing that annoys you about them in their golf game?
DJ: No, I play with my wife (Ice Hockey icon Wayne Gretsky’s daughter, Paulina) and sometimes with her mother. We have fun with that.

Q: If you could change one rule in the game what would it be?
DJ: Easy. I don’t like it, whoever it affects. When you drive it straight down the middle and it ends up in a divot. That should be ‘ground under repair’.

Q: If you had to play one course for the rest of your life where would it be?
DJ: Baker’s Bay in the Bahamas or Augusta.