As the richest men on the planet, Bill Gates could sleep in the best hotels, dine in the finest restaurants and drive the fastest cars. With £47billion in the bank, his options are infinite. But it is travelling frugally through the Third World and experiencing poverty that makes Microsoft computer tycoon William Henry Gates III and wife Melinda the happiest.
American Bill, 58, ranks with the Medicis, Romanovs, Rothschilds and Rockefellers as one of history'swealthiest individuals but he has no intention of building a dynasty. He and his wife have decided to dedicate their lives to the Bill & Melinda Gates Foundation and give away their fortune in a bid to eradicate killers such as polio, TB, Aids and Malaria.

In a rare and exclusive interview, Bill tells Life Beyond Sport: "My wife and I have chosen to give all our money to these causes because of the incredible importance and value we believe ALL lives have.  "So much of what we take for granted, other families around the world don't have. Through disease and poor nutrition, children are growing up without their brains developing properly so they can't break the cycle of poverty." Bill was in Britain on Saturday to campaign on global hunger ahead of next week's G8 summit in Northern Ireland. He attended the Nutrition For Growth summit in London to discuss "stunting", which affects 165 million children under five across the world. Caused by malnutrition while in the womb and during a child's first two years, stunting also  holds back learning and increases susceptibility to illness — and the damage leaves its mark in later life. In Ethiopia alone, about five million under?fives suffer this fate.  Bill is on a crusade to help these kids and others — and during our interview thrusts in front of me a small sachet of liquid nutrients.  The packet costs just six pence and, taken once a day, could prevent stunting. He says: "It's not expensive and helps with survival and development.

"Around the world there are still seven million children under five dying each year. Why is a
child's death in these countries less tragic than anywhere else in the world? "A lot die in the first 30 days from diarrhoea and pneumonia. If they had better nutrition, a lot would survive. "Also, if you look at kids in Africa, half are not able to learn because they haven't had enough nutrients to develop the brain. So there is this cycle of poverty. People often ask me, 'But if you have more people surviving, isn't global poverty harder to solve?' "The answer is no, because if a child's chances of survival are better, their parents tend to have less children. "Countries like Brazil and Indonesia have lifted themselves up. Now we need to recreate that model elsewhere." Today, a seemingly endless queue of dignitaries, politicians, and scientists queue to meet the
Microsoft boss — one of the greatest innovators of our time. When I interview him, he cuts a humble, even shy figure, sporting a plain grey suit and dishevelled hair. But it takes only seconds for me to sense a mind that is bordering on genius. He is most thoughtful when describing the people who have inspired his work against poverty. He says: "I get to Africa and India every year. In India, I got to hold a child called Hasmeen.  She is one of the last children to have been paralysed by polio. But she was smiling so much.  She had no idea. She was so naïve about what was ahead of her."

Bill and Melinda, an engineer's daughter, have funded mass vaccination programmes to fight  diseases such as polio and TB — as well as research into the holy grails of health, vaccines for Aids and Malaria. Bill set up his charity in honour of his late mother Mary, a teacher, who encouraged him to begin his philanthropy. She died of cancer in 1994 — but not before penning a letter to Bill and Melinda saying: "For those to whom much is given, much is expected." Reflecting on his mother, Bill says: "She was a philanthropist in terms of her resources and time. She headed all sorts of voluntary?type things."

His dad William, 87, a retired lawyer, still helps out at the Gates Foundation every day — and
Bill adds: "The values my parents had, I have tried to live up to." Bill and Melinda's children are Jennifer, 16, Rory, 13, and Phoebe, ten. But Bill has denied them his billions. He said recently: "I will give them some money but not a meaningful percentage. It wouldn't be good for them or society." Meanwhile, he praised the UK for "leading the way" in tackling child hunger, after our Government committed £655million over the next six years to saving millions from chronic malnutrition. Campaign group Enough Food For Everyone If organised a rally in London's Hyde Park on Saturday. Among the speakers was Danny Boyle, director of the London 2012 Olympics' opening ceremony, who said ending world hunger would be "the greatest gold medal Britain could win in 2013". After our interview, Bill rushed to stand in an artificial field of two million petals, representing the number of lives campaigners hope could be saved. He told the Hyde Park crowd: "The UK is keeping its promise to the world's poor, largely because all of you remind your leaders, regularly and loudly, that this stuff matters." 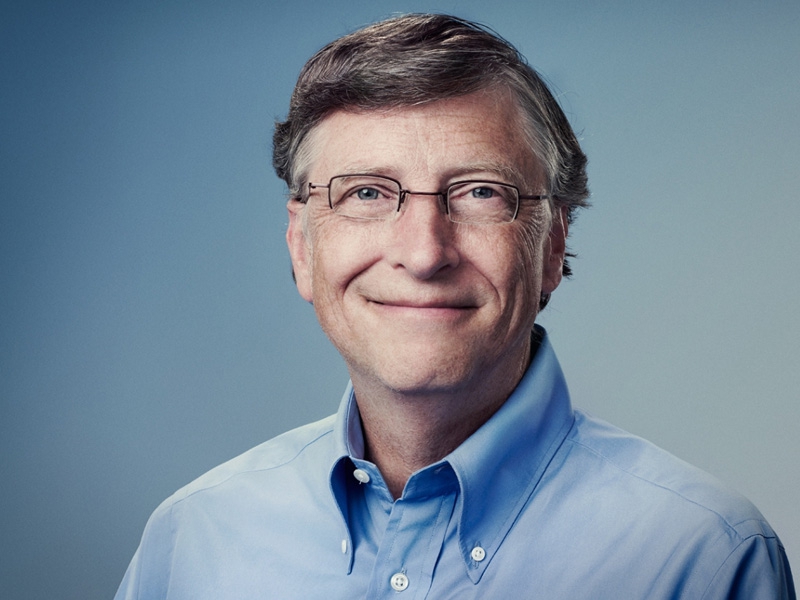 Meanwhile, a report in medical journal The Lancet last week said the main cause of nearly half of the deaths of under?fives each year was malnutrition. Bill is on a mission to apply his extraordinary brain to this challenge. He says: "There is intelligence in terms of the way aid is being spent. When implementing  new seeds or vaccines, you can track them. There isn't some dictator who wants to have a palace full of vaccines or seeds. The reason annual child mortality has fallen from 12 to seven million globally is because of aid generosity."

Where Bill leads, it's hard not to surmise, it makes sense to follow.