A journey through The Grand history

Located between two historical canals in the heart of the city, Sofitel Legend The Grand Amsterdam boasts a rich history.
From a 15th-century convent to royal lodgings to Dutch admiralty headquarters to the city hall of Amsterdam. The Grand offers five-star luxury in a unique ‘Amsterdam’ ambiance, furnished with French elegance and grandeur. The rooms, restaurants and bars, the banqueting halls and the beautiful Garden Terrace captivate and seduce everyone into visiting the hotel. 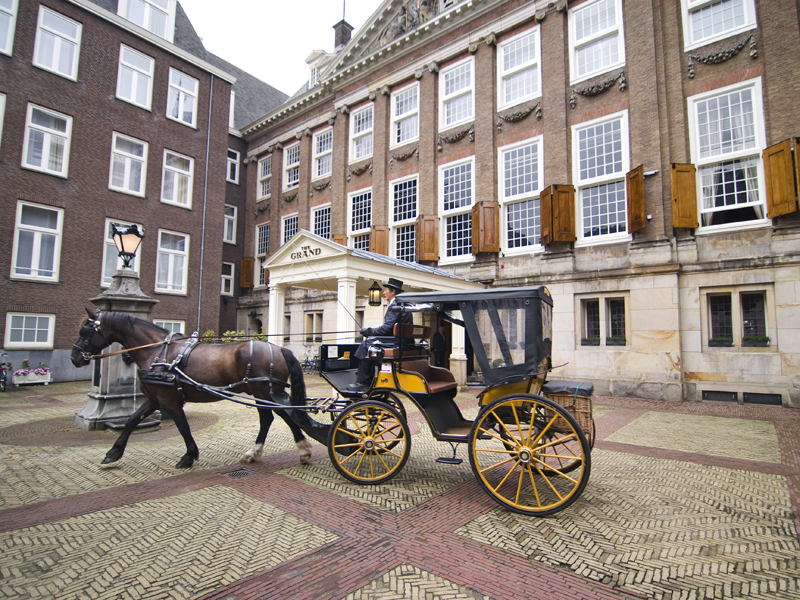 The building began life as a convent

In 1411, the St. Catherine’s Convent occupied the southern part of the property, while St. Cecilia’s Convent occupied the northern part. At this time, Amsterdam had many convents and monasteries of which the designs were characterised by courtyards and walled gardens. Relics of the floor plan are still in evidence at The Grand.

In 1578, after the Reformation, Protestantism was adopted as the official religion of Holland and convents were confiscated as city property. Under its new name, ‘Princenhof’, the St. Cecilia Convent provided accommodation for the Princes of Orange, Prince William of Orange and his sons and successors Prince Maurits and Prince Frederik Hendrik. The French Queen Maria de Medici also stayed at Princenhof back in 1632. 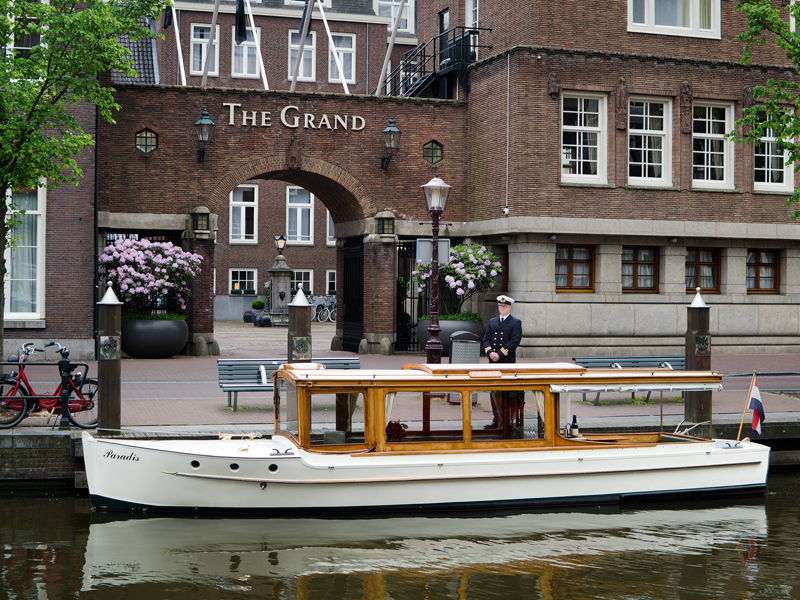 After the Reformation, part of the St. Agnes convent was used by the Admiralty of Amsterdam. In 1655, the Admiralty took ownership of the entire property. The board built a structure between the former two convents and commissioned master bricklayer Willem van Gaffel created the new headquarters, on the dividing line exactly between the two convents. It is a typical example of strict Dutch neoclassical style, with a wide façade made of brick and natural stone, crowned with a triangular fronton and sculptures that symbolize the power of the former Admiralty. The weather vanes on the roof represent the ships of the commanding general officers of the Admiralty, and show the crest of the crossed anchors. The impressive façade of this main building is now the entrance of The Grand. 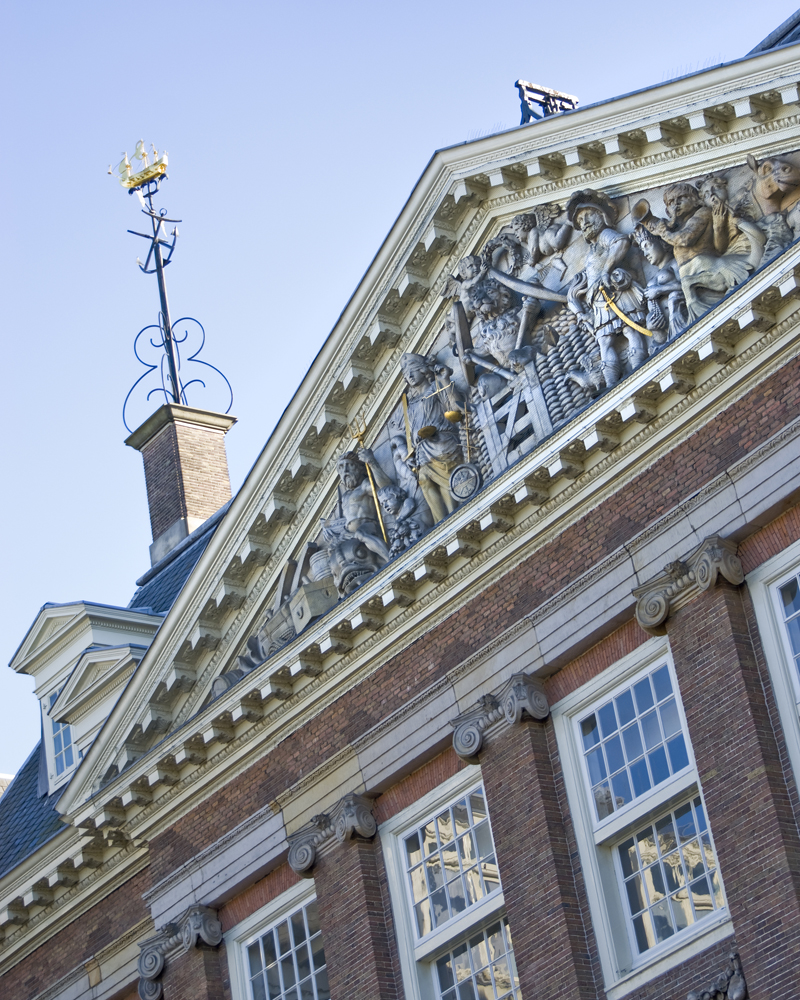 The property became the city hall of Amsterdam

After a period of relative calm, the imposing building along the Oudezijds Voorburgwal received new residents in 1808. The city hall of Amsterdam moved to Princenhof, so that the French King Louis Napoleon could convert the former city hall on the Dam into his Royal Palace. Even after the city regained its independence and saw the return of the House of Orange, the former city hall on the Dam continued to be used as the Royal Palace, with the Princenhof remaining as the city hall of Amsterdam for the next 180 years. 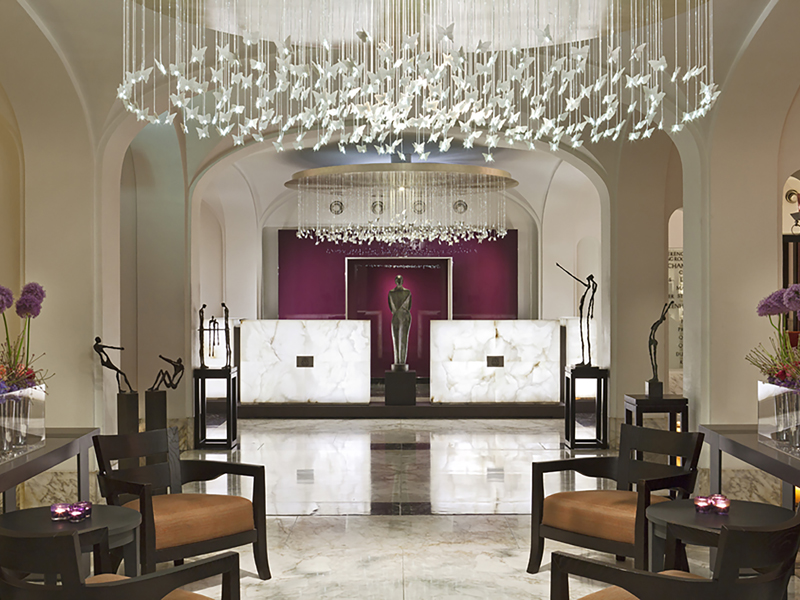 Following World War II, the Princenhof was considered ill-equipped to serve as the government seat of a large mercantile city. Construction began on a new city hall several decades later and it opened in 1987. Once the Princenhof no longer served as the seat of Amsterdam’s governance, its fate was uncertain. Citizens were concerned that the art housed there, would be lost or sold, so the City Council passed a resolution that the priceless cultural items would be inviolable.

In 1992, the building was transformed into hotel Sofitel Legend The Grand Amsterdam. No expense was spared to renovate, preserve and repair the structure’s exquisite features. The restoration retained the flavour of the Princenhof, whose walls are adorned with reproductions of French and Dutch coats of arms as well as portraits of Holland’s nobility. If the 600-year-old halls of The Grand could talk, what tales would they tell?

Art at The Grand

The Grand is the perfect place for art lovers with its rich history and the presence of original works of art by various (Dutch) famous painters and sculptors. The monumental building that houses the five-star luxury hotel has a long history when it comes to art. Famous artists have contributed to both the exterior of the building - the imposing façade - and the interior. To illustrate, artists Hildo Krop, Chris Lebau, Willem Penaat, Joseph Mendes de Costa, John Raedecker, Karel Appel and Johan Thorn Prikker created beautiful art pieces that are showcased at The Grand. Besides, The Grand used to portray several famous Dutch art works during the time that it was the city council of Amsterdam. Such as various statues (David & Goliath, de Gravenbeelden) and paintings by Rembrandt (The Jewish Bride), Ferdinand Bol and Cornelis Anthonisz. Those art works are now showcased throughout different museums in Amsterdam.

In addition to its different functions over the past centuries, the Princenhof building at The Grand participated in the evolution of art in Amsterdam. In 1949, the renowned artist, Karel Appel, was asked to paint a mural at the canteen of the city hall of Amsterdam. This painting can still be admired at the entrance of Oriole Garden Bistro and restaurant Bridges. His style was vastly different from that of artist Chris Lebeau who painted the room filling mural in the Marriage Chamber. While the new artistic work wasn’t well received at that time, both murals are considered invaluable art treasures of the city today. 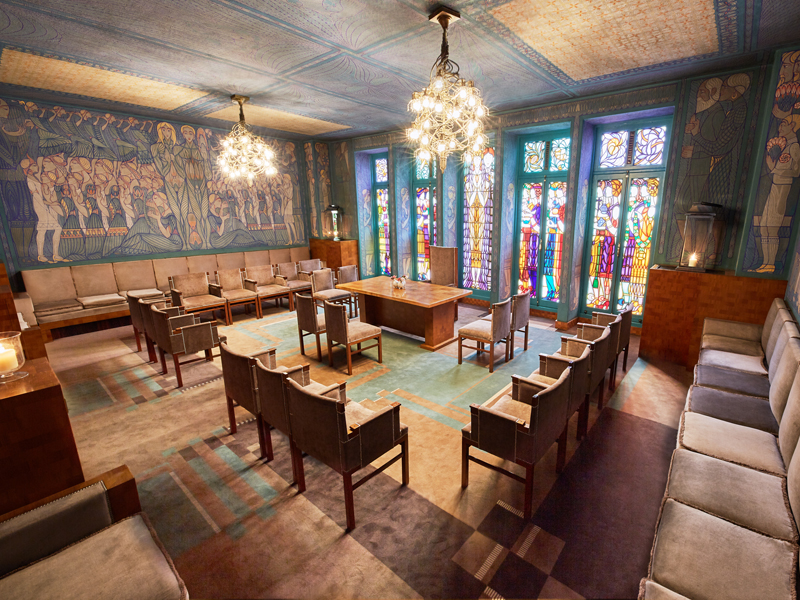 In the summer of 2020, the Artists in Residence project was initiated in collaboration with writer and journalist Ivo Weyel. The project aims to support the affected art-world. “These were unprecedented times. COVID-19 influenced everybody’s life, physically, mentally or financially. The art-world was also heavily impacted. Many artists became unemployed,” says Ivo Weyel. The Grand offers them a helping hand by inviting a range of artists to stay in the Artists in Residence Suite and work on a new piece of art. The project is scheduled to last one year and will result in a beautiful coffee-table book in which the 52 works of art will be displayed. The original pieces of art will be exhibited at the hotel and some will be put up for auction raising funds for charities that support the art-world.

The Artists in Residence project encompasses different art disciplines, from painters to poets and from jewellery designers to photographers. In addition, both young talents and renowned artists participate in the project, including Ewerdt Hilgemann, The London Police, Sarah van Sonsbeeck, Hans Aarsman and Renske van de Greef.

Guests who stay at The Grand can discover the rich history by taking a private tour through the hotel. Learn all about the history; from a 15th-century convent to royal lodgings, to the headquarters of the admiralty to the city hall of Amsterdam. 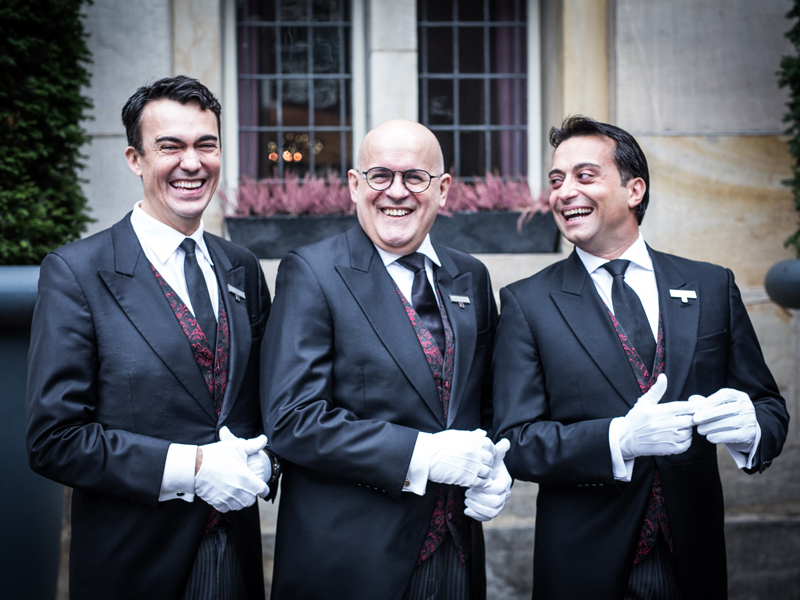