Dubai, the City of Gold, is all set to create another world record as part of the 20th edition of Dubai Shopping Festival (DSF) by making the world’s longest hand-made gold chain stretching 5km in length. 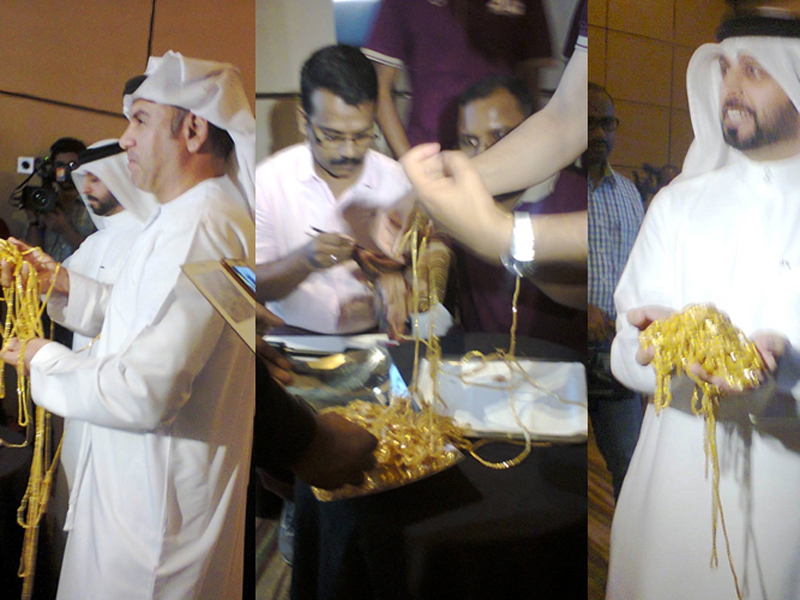 The ‘Dubai Celebration Chain’ in 22-carat gold is to be made jointly by 500 leading jewellery retailers of the Dubai Gold and Jewellery Group.

Dubai will be competing against its own world record set in 1999, when a 4.1km-long gold chain was unveiled as part of DSF in which 363 jewellers and 9,600 buyers took part, Laila Mohammed Suhail, CEO of Dubai Festival and Retail Establishment, and Tawhid Abdulla Abdulla, Chairman of Dubai Gold and Jewellery Group (DFJG) announced on Monday.

The organisers are silent about the exact length of the gold chain and hint that it can be between 5km to 8km long and could weigh between 160kg to 200kg.

The 1999 gold chain was 4.382km long and weighed 238kg. It was sponsored by AngloGold and made by Siroya Jewellers.

The public will have a chance to buy a part of the historic Dubai Celebration Chain.
Chandu Siroya, vice-chairman of the Dubai Gold and Jewllewry Group, said: “To make the 20th anniversary celebrations of DSF a memorable experience, Dubai Gold and Jewellery Group, in association with Dubai Festival and Retail Establishment, will attempt to make the world’s longest hand-made gold chain with a minimum length of 5km. If demand increases, the chain will be extended to 8km.”

He added that the Dubai Celebration Chain will be assembled in public in the presence of media and representatives of the Guinness World Records and will be displayed at prominent locations in Dubai prior to DSF for public viewing.

DGJG intends to finish making and assembling the chain for display on January 2, 2015. Malabar Gold will be making 2.5km of the gold chain, Managing Director Sham Lal said.
Dubai Shopping Festival’s gold promotion, which runs from January 1, 2015 to February 1, 2015, is offering 100kg of gold and 40 karats of diamond in the mega gold and jewellery raffle. Dubai Gold and Jewllery Group aims to boost sales by 30 per cent during DSF.

Once the chain is done, it will be placed in different locations and in the gold souq. The public can pre-book for pieces of the historic chain through jewellery retailers who are part of the DSF promotion network.

Pre-booking of the gold chain will started on December 1, 2014 and will be tentatively available for purchase from January 5, 2015 till the end of the shopping festival.