Will Make You Feel Rich

Looking for an expensive way to serve champagne or soak your friends in bubbly? For $499, the Champagne Gun will do the trick. It looks like a Tommy Gun, but it's loaded with the expensive stuff. The product, which was launched a couple of years ago, has proved popular at nightclubs and among those who want to act like a serious player and are unafraid to waste alcohol. Jeremy Touitou, founder of the company, explains:
It only fires Champagne!

The Champagne Gun, which resembles a Tommy Gun and is available in gold, chrome, or rose gold, and many other shiny colours.

"You put a bottle of champagne inside, and depending on what you want to do, you can either serve champagne, or you can use it, of course, to do a champagne shower," Touitou explains. "You just shake the gun, and it goes for 40 to 45 seconds and sprays a range of about 20 feet. A lot of consumer are buying this to put it in their home, to put in their bars, just because it look good." 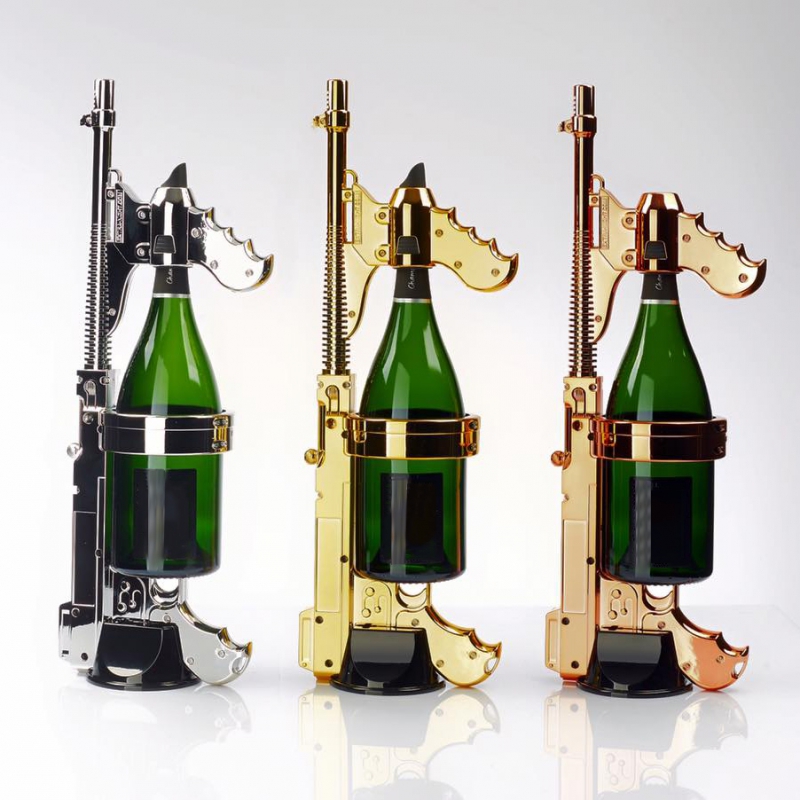 It's good for weddings

"It’s a wealthy clientele, who can afford to spend $499 on such a product, on a luxury toy, I would say," Touitou notes of the gun's target demographic. "It could be a nice centerpiece for a wedding, you know."

It's big in the US

Sales, Touitou says, are "amazing." He reveals, "We sold probably six hundred units in less than a month and a half." The largest number of orders have come from gun-friendly USA.

It's beloved by rappers

"We had ASAP Rocky use it at Coachella," Touitou reports. "All the artists are getting it for their music videos."
It's for ballers

Why is the Champagne Gun a hit? "Everybody’s attracted by guns & champagne," he says. "Everyone’s attracted to danger & luxury, I guess."

It's for every budget

We asked Touitou what brand of champagne he recommends for the gun.

"There is no brand working better than another," he mused. "It depends on your budget. If you have unlimited, you can put a $2,000 Ace of Spades bottle, if you have the means to waste an expensive bottle of champagne."