Thirteen Premier Leagues, four FA Cups, four League Cups and two Champions Leagues, having scored 168 goals in 963 games for Manchester United, Ryan Giggs is a living, till recently playing legend, and he turned the ripe old age of 40 in November.
It is a remarkable landmark. "It's sad because as a footballer I didn't really take a lot of it in with birthdays and Christmases. Usually I was in training. Christmas Day I always was in a hotel in Hull. It's what I'm used to. I've been doing it for 22 years.'' He has always been driven. "I'm always trying to improve myself, never settling for playing just well.  Constantly, every season, I was always questioning the sports scientists and coaches so I could get better. I knew the feeling of letting myself down and not producing on a Saturday and I always wanted to prepare myself to play well. "I've never been one to think 'that was good'. I was always looking forward. When we finished a game, it was 'right, great result, who've we got Wednesday? Get yourself ready for Wednesday'. I probably didn’t get to enjoy football as  much as I could. I enjoyed it for a split second then I was on to the next game.  "I still get angry in the dressing room. I'll shout. I'm a moaner. If someone's made a mistake, I'll let them know - 'what were you thinking?' I feel that's my job. I hope they learn from that. It made me stronger when Bryan Robson and the others did it to me when I was starting out. I remember, sitting on the coach thinking: 'This is the end of the world, the gaffer (Alex Ferguson) has had a go at me, we've just got beaten and I've missed a chance and he's not going to play me next week.' "Robbo would come up and say: 'Don't listen to him, you're young, you'll make mistakes, just come back the next game.'

Now a coach, Giggs is sitting in a side room at Carrington, still lean, still defying time, still shaped by his schoolboy days. "I was a stand-off at rugby league playing against props physically bigger than me. That helped make me able to take the battering. My first game (in 1991) I came on up front against Everton and Dave Watson went right through the back of me. I wasn't intimidated. "This Sheffield United right-back was kicking me one game, giving me a few verbals and it affected me a little bit. I said to Robbo: 'That right-back's just said he's going to break my legs.' Robbo said: 'Did he? You come and play centre-midfield. I'm going to play left wing for 10 minutes.'  "We swapped positions. Robbo soon came back: 'Aye, you're all right now, go back over'. 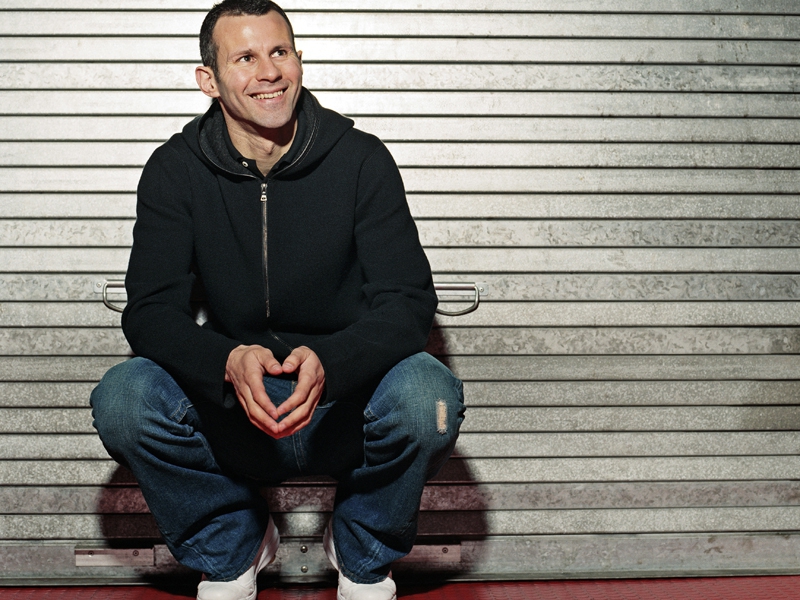 Problem solved! I had this mentality that if Robson was playing we'd never lose. He had that authority. Him and Brucey (Steve Bruce) were brilliant for me. "That '94 side had characters, men. It had power and pace. We'd football you to death, we'd fight you to death, it didn't really matter to us, we'd beat you. We had players like Incey (Paul Ince) who'd drag the team over the finishing line, just immense. There are definitely fewer leaders now. I'm doing my Pro-Licence and we talk about the game missing characters like Tony Adams, Robbo, Brucey, Keane, leaders. There are those sort of players still like Steven Gerrard, Wayne Rooney and John Terry.'' But not enough.

That '94 team had Eric Cantona. "Because Eric had that aura, and with what he did on the pitch, everyone from the outside looked at him as completely different but within the dressing room he was one of the lads. Brucey, Keany, Incey would all take the mick out of him just like any other team-mate.'' Cantona helped develop a United generation. "If you're an apprentice coming off the pitch, and you see Cantona practising his volleys and shooting, you think, 'he's a top player, he wants to stay at the top, so you still practise'. But the likes of Beckham, Neville, Scholes, Butt were already doing that. It wasn't a case where everyone went home and didn't train until they saw Eric. It was built in us from Eric Harrison that you practise, practise, practise. I wanted to improve my crossing.'' 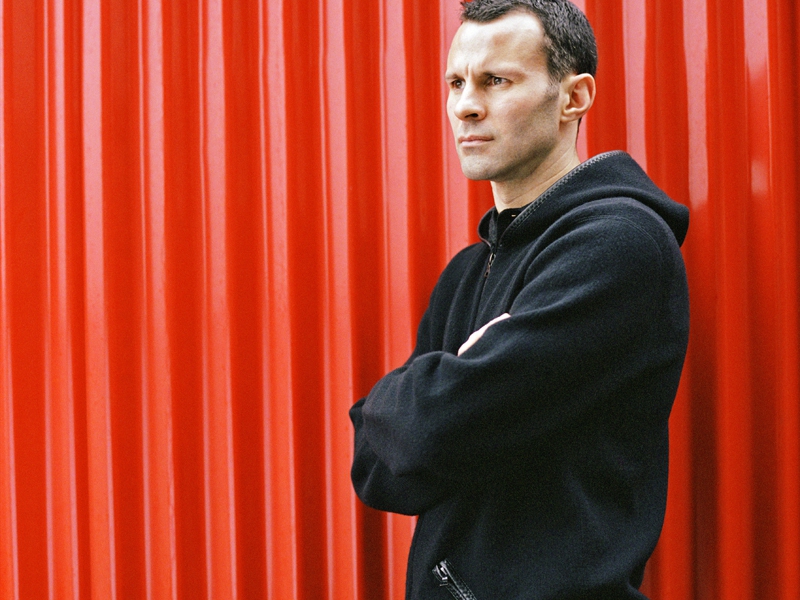 Crosses rained in from Giggs on the left, soon from David Beckham on the right. "Beckham was mentally strong as well as a great player. In '98, '99, 2000, he was definitely top three in the world. How many players have tried to keep him on his left foot? Still he would get a yard and whip it in on to the head of Yorkey, Coley or Teddy.'' For all the spotlight on Beckham, his United team-mates kept him grounded. "It was probably similar to Eric. Becks was in the right place. We'd take the mick out of him. We'd go  to grounds where there would be banners with 'I Love You David' and we'd say, 'Becks, we can't go anywhere'. After the '98 World Cup (dismissal), we'd say: 'I'm not sitting next to you on the coach, I'm not walking out with you from the coach. You go out and then we'll come after!' For him, it was relaxing. 'I'm with my mates'.''

Giggs had a close-up of the decline of Beckham's relationship with Ferguson, particularly the
flying boot. "I was right next to him! It whizzed past me.'' Giggs talks of others he has played with and against. "We'd have shooting sessions with Wales. Neville Southall was like Peter Schmeichel. He'd be laughing as he punched shots away - 'You're not going to beat me today!' Ian Rush impressed me with the little diagonal runs and the finishing. He was like Ole Gunnar Solskjaer, right foot, left foot, bottom corner. Gareth Bale's similar to Cristiano Ronaldo: power, physique, exciting. 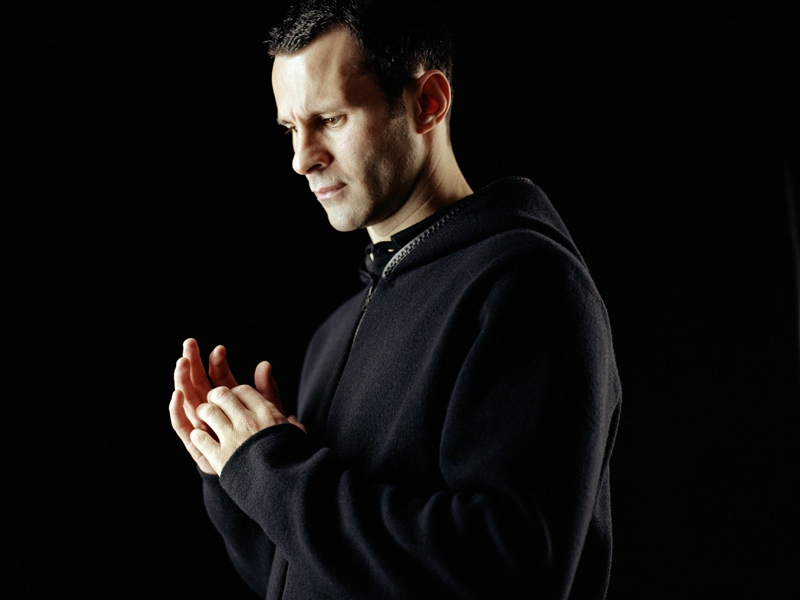 "Paolo Montero and Ciro Ferrara, of Juventus, were the toughest defenders I played against. It was: 'The ball might go past us but you're not'. It was old school. That Juventus side of Boksic and Del Piero were like us, powerful and quick, but the Barcelona team who beat us at Wembley were the best I played against. They had Lionel Messi, the best I've seen. You can say 'keep him on his right foot', but he always seems to get on his left foot. He's just brilliant. You can't kick him. You can't rattle him. He just gets on with it. "You could probably wind Cristiano up. He's been rattled a few times. I do feel for him being at the same time as Messi but in my eyes he's still a phenomenon, a brilliant talent. He's done it in Portugal, in England and now in Spain. He's not a Clive Allen or Tony Cottee. He's not a goal-hanger. He's a dribbler, a talented player, powerful, and just scores so many goals.

"The top players - Messi, Ronaldo - ride the tackles. We are seeing it here with (Adnan) Januzaj. He's slightly built, but he can ride tackles. He has that potential to be a top player. He's grounded and he's at the right club. "The art of tackling has changed. Players look for fouls now because they know they're going to get them. You have to be careful. It's still full on in training; we still clatter into each other, no shin-pads. You get an eight a side, one team's up and starting to take the p*** and the other team starts smashing them. It could be Wayne, it used to be Scholesy! If you ask Scholesy, he genuinely thinks he's a good tackler. 'I just mistime it now and again.' It wasn't: 'I'll dip my toe in.' It was the way he would sprint up to it: sometimes he got the ball, sometimes he didn't. "Sometimes you go out at training, need the toilet, and just nip into the bushes but you have to think: 'Where's Scholesy? Has he got a ball.' He'd try and hit you. Usually Gaz Neville got it.'' There was always the feeling that Scholes was not properly appreciated by England. "Well, here he was. We built a team around him; he had the ideal partners, Butt, Keane, next to him. They were brilliant for him.

"The running theme here is strong mentality. Robin (van Persie) is world class. He would sometimes not have great games last year but he'd score the winner. Similar to Eric. Give him the ball. Wayne's like Cristiano - a powerful, brilliant goal-scorer, turning and running at players. He's fit, hungry and happy. He's phenomenal.''

When Rooney was unsettled in the summer, Giggs talked to him. "I let him know I wanted him to stay: 'This is the place for you. Bobby Charlton's goal-scoring record is in your sights. That's an unbelievable record. Do you really not want to take that chance?''' Rooney has stayed but football continues to change. "You rarely talk about the game now on the coach.  The younger players now are straight on the phone, Twitter, whatever. When I first started, Paul Parker was probably the only one with a mobile - a big brick! You'd talk about the game, good or bad. I wouldn't say it's had an effect on the team spirit. There's always been a good team spirit here. Sometimes they're all linked up on the coach, all playing computer games against each other, so there's a bit of team spirit there. You get on the plane for European trips, and the lads are playing 'Call Of Duty', six v six. So there's banter there, and they talk about it for the rest of the day. "I could never see myself on Twitter. Players are human. If you're going to get some stick it's going to affect you. If it's in the paper you don't have to read it.

"If you've got to be on Twitter so many times a day you've got to look at the abuse which can't be nice. "Generally, footballing fans appreciate good players. In Europe for some reason I get a really good reception, no matter where I go. I get it in Italy. I've had it from Athletic Bilbao and Real Madrid fans. I was in London the other week and a cabbie said: 'I'm a West Ham fan but you're my favourite player.' West Ham! Where any United team get abused! I'd love to point him out in the crowd and say, 'You're abusing me now!' I heared a lot more (remarks in matches) as I got older, taking corners, hearing the odd funny one and I chuckle to myself. 'You're finished.' 'Too old.' 'Get your walking stick out!'