“Figo was the No.1, as a footballer and as a person,” said one steward who works as a volunteer at Internazionale’s Appiano Gentile's training camp. “He was always one of the first to arrive for training sessions and commits himself like no other. And he always spoke to us, either saying hello or wishing us, ‘Bon Apetito’ if he noticed us grabbing a snack. I just wish that Inter had four or five more players like Figo was,” added the lifetime Nerazzurri fan. Now that the Portuguese winger’s career is ended, he has everything – trophies, glory, and money. So why isn’t he on his sofa, under a blanket and watching trash on TV? “I just like to work out, even though my career has come to an end. Everything comes easier to you if you like to practise,” he explains. And the same goes for interviews; they become easier after so many years practising them – even when it’s a Life Beyond Sport interview.
Growing up, how much time did you spend honing the step-overs, feints and dummies that you would later use to such good effect? Were you always a winger?
I truly believe that everything was born with you and it’s something that comes naturally. Of course, later you need to practise these skills a lot in training sessions and games, but if you don’t have a natural talent, it’s worthless. I haven’t always played as a winger. Actually, I only started to play as a winger when I joined Barcelona. At Sporting I used to play more as a midfielder.

As part of the so-called Golden Generation of Portuguese football, you won the Euro U16s and World U20 championships. Did such success convince you all that you were going to win something at senior level too?
Yes, I think that generation changed Portuguese football and opened many doors. Back then, clubs could only use three foreign players and they were forced to give more chances to younger players. And those trophies we achieved in the youth teams proved there were quality players over there. 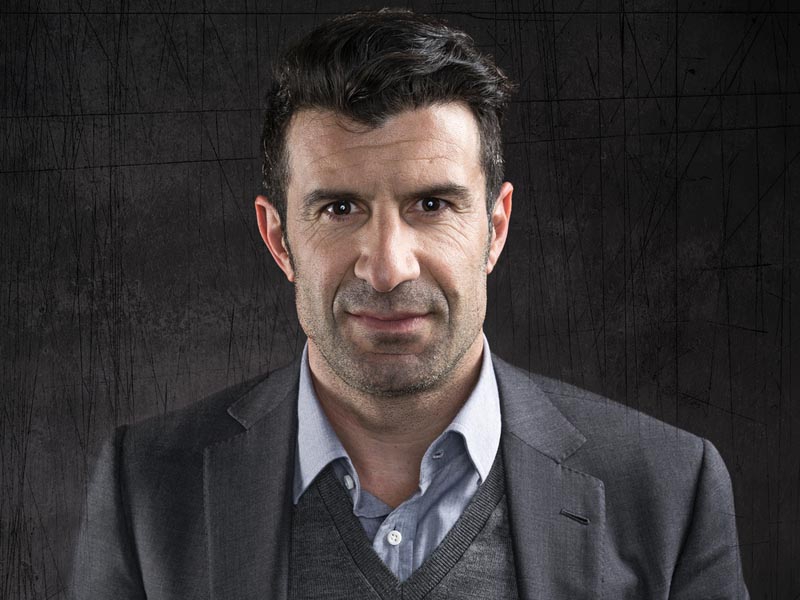 Other than Eusebio, who were your heroes growing up?
To be honest, Eusebio was not among my big idols because I never saw him play. I was more a fan of the great players from the 1980s, especially after the 1982 World Cup. There was Maradona, Zico... in Portugal, Fernando Chalana and Paulo Futre, both of them wingers. I guess we all have a tendency to like guys who play in the same positions as we do, right?

You first played under Bobby Robson at Sporting Lisbon. Did he ever get the names of players mixed up, as he often did in England. What’s your favourite Bobby Robson story?
Not that I remember! Of course he was a foreigner and sometimes it was hard for him to remember some words or some names of the players, but I don’t remember him calling a player by someone else’s name. Once, at Barcelona, at half-time during a match against Logroñes that we were winning 4-1 or 5-1 with three goals from Ronaldo, Bobby Robson turned to him and said: “Ronaldo, Ronaldo... I want a double hat-trick, double hat-trick.” We all rolled on the floor laughing. We all knew what a hat-trick was, but... a double hat-trick?!

What happened between you, Juventus and Parma in 1995? Did you really sign for both clubs?
My contract with Sporting was about to expire and the club hadn’t done anything to sign a new one, at least not when I thought they should have. They reached a deal with Juventus to transfer me, but I was angry when I found out about it and I signed a contract with Parma’s president, Pastorello. It was the only proper contract I really signed – what I’d signed with Juve wasn’t supposed to be a valid contract. But Luciano Moggi, whose influence in football I understand a bit more these days, managed to ban me from playing in Italy for two years. Maybe it was my lucky moment, because in the end I went to Barcelona. 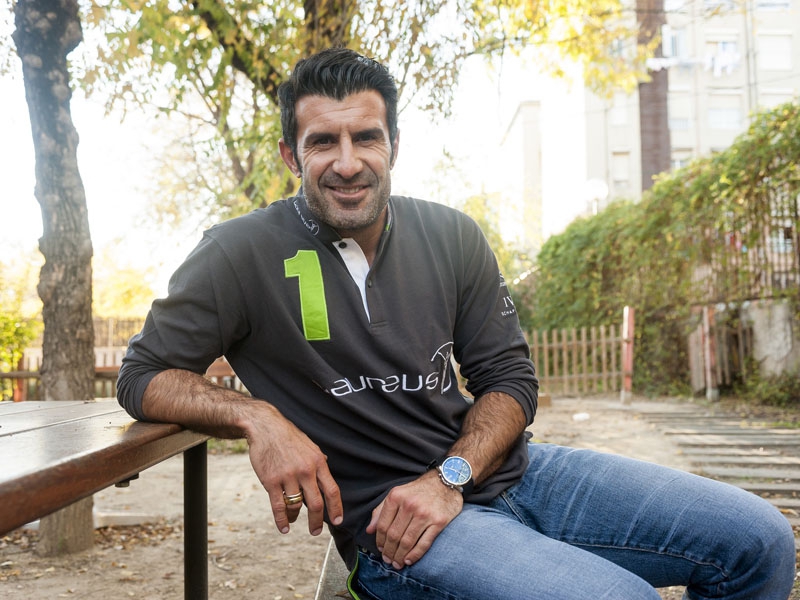 Johan Cruyff signed you for Barcelona to replace Michael Laudrup. How much pressure did this put on you?
When you are 22 and you face a challenge like Barcelona, you never think about who you’re going to replace. You just want to do your best, prove what you’re capable of and show that you deserved the chance. That was exactly what happened to me. It was the best decision I’ve ever made in my career.

In 1996-97, Ronaldo scored 34 goals in 37 games. What was it like to play with him when he was at his best?
Ronaldo was just amazing. He was born with this special talent for football. His strength, speed and skills were unique. Some players work 14 hours a day and they just can’t reach a high level. Ronaldo almost didn’t need to practise to be a great player. I don’t think I ever had a team-mate who achieved such impressive figures in just one season. 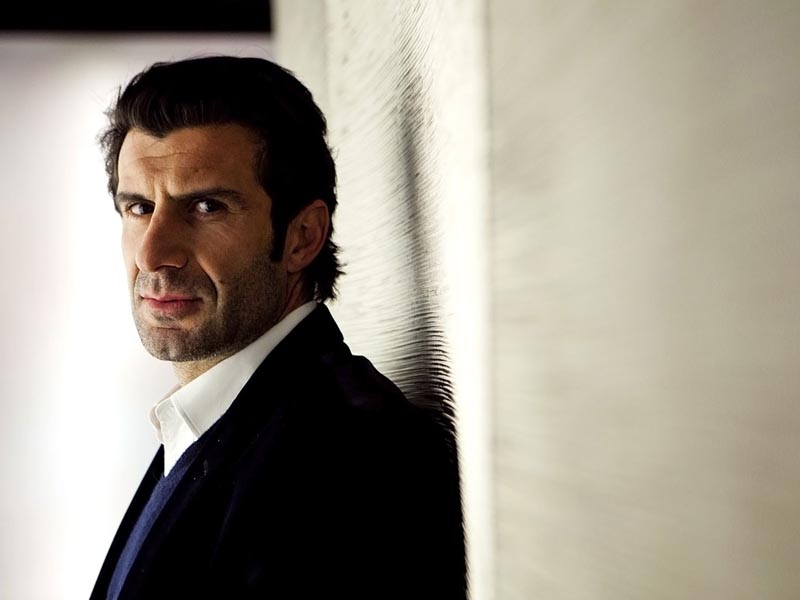 I’ve read that after winning the title with Barça, you once dyed your hair red and blue and chanted ‘White cry-babies, salute the champions!’ Is this true?
Yes, it’s true. They’d spent the entire season complaining about referees and saying that we had all the benefits. In the heat of the celebrations, I did sing something like that. I shouldn’t have done it because in football you should always respect your opponents.

You used to own a Japanese restaurant in Barcelona – what do you prefer, a traditional Portuguese cozido or a tasty bit of sushi? Did the players ever come to the restaurant and try to eat for free?
It all depends on how hungry I am or whether I’m having lunch or dinner! I love Japanese food, but also Portuguese. The truth is the restaurant belonged more to my wife, it was a business we set up together with a couple who are friends with us. And it didn’t last long because soon we moved to Madrid and we closed it in order to avoid problems in Barcelona. All my team-mates had to pay, sure. There’s a rule in business: never give anything to your friends!

Many have said that your performance against England at Euro 2000, when Portugal came from 2-0 down to win 3-2, was one of your best. What do you think? Were England just tactically naïve?
I’m not sure if it was my best game, because I had some great games for Portugal. In fact, all the games I played for my country were extraordinary. I’ve always been proud to play for Portugal. It’s natural that people remember that match because it was in the Euros and had all that symbolism.  I think England were just England: it’s a matter of culture and mentality. I remember once, while I was still at Sporting, we had a friendly game against Newcastle and we were losing 3-0 at half-time and we managed to win 4-3. An Italian or Spanish side would never let the opponent come back from 3-0 down. But English football is open, they always try to attack, even if they are winning.

Apparently you’re a bit of a watch collector. How many do you have and which is your favourite? Ever met a footballer with more watches than you?
I have about 40. I have my favourite brand, which is called IWC, but I also like Seiko, Franck Muller and even Swatch. It all depends on the occasion and who offered them to me. I’m not sure if there are footballers who have more than I do, I guess there are. But I don’t ask how many watches people have. 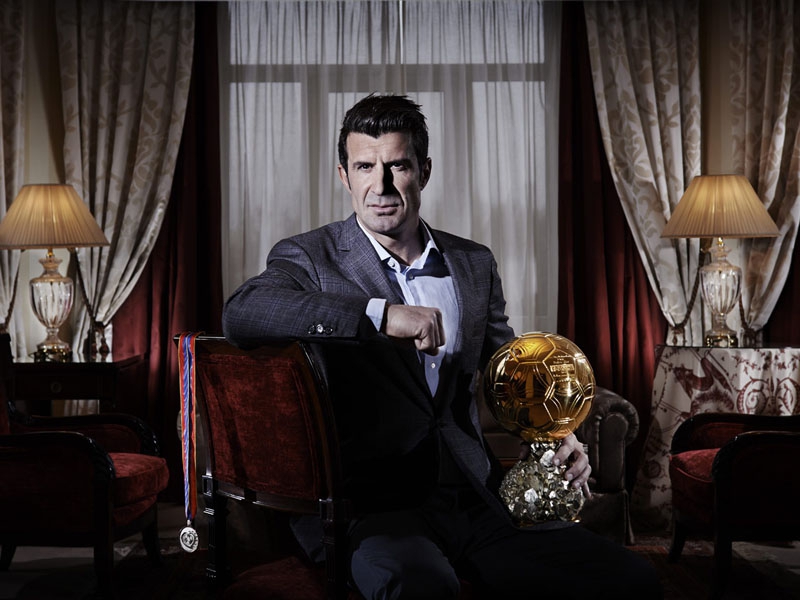 Much has been written about your transfer from Barcelona to Real Madrid. Can you tell us exactly what happened? Is it true you never wanted to leave?
I thought that Barcelona were not treating me properly by not paying me according to my importance at the club. The chance of joining Real Madrid came up but the directors of Barcelona assumed I was bluffing them. I believe they later used the fact that I was leaving to show they had financial problems. In the end, when I already had a deal with Real Madrid, it’s true they agreed to give me what I was asking for and there was a chance for me to stay. But it was too late and I ended up going to Real Madrid to avoid problems for my agent, who had a commitment with them.

What are your memories of that infamous game at the Nou Camp involving bottles and pigs’ heads? Did you prepare any differently for the game and were you concerned for your welfare on the pitch?
It was a significant game for me, as it made me much more mature. I was probably the only player in the world who had 100,000 people together just against him. My build-up for that match was exactly the same as it always was. My only concern was to play football and do my part. But of course I was a bit worried that I could be harmed, because you never know if there’s some crazy guy who will do something stupid.

At Real, when the team included yourself, Zidane, Ronaldo, Raul, Beckham, were there any actual tactics? Or was it simply a case of expressing yourselves?
In our first season, with Vicente del Bosque as coach, things went well for us, we won almost everything. Things went wrong the next season, especially when some directors started to get involved in technical issues, using their influence to affect the players with non-football issues.

Who is the best full-back you’ve ever come up against?
Roberto Carlos and Bixente Lizarazu. I had some intense duels with both and some of them were historical. They were two very fast and aggressive players and it was hard to beat them.

When David Beckham joined Real Madrid, the press made out there was a big rivalry between both of you. Did you laugh about this when he joined? As one of the few English speakers, I heard that you even helped him find a house...
Yes, it was something totally made up by the press... I laughed a lot at those stories. People wrote things without even knowing what’s happening in the dressing room. I’ve always had a great relationship with David andwe are still in touch. He’s a good person who is easy to deal with.

You’ve scored some great goals, but which is your favourite?
I didn’t score that many... Maybe that goal against England in the Euro 2000. It was a thrilling game and during a very big competition. Or one that I scored for Barcelona against Real Madrid.