Every high end watch brand needs its own niche in able to survive and thrive. In the last few years, there’s no getting away from the fact that Hublot has made football its game. So let’s take a look at how Hublot has become the football teams’ watch of choice.
First of all, the Swiss watch brand partners both FIFA and UEFA which gives it access to almost every player and every match in the world.

Teams and talent
Hublot’s also gone out of its way to find the right football legends, of the past and of tomorrow to bring into the family. Pele - the three-times World Cup winner -  has been involved with the brand since 2013.

Hublot has been canny in signing up whole teams and creating watches for some of the biggest names in football. Last year it unveiled the second timepiece in collaboration with Chelsea FC, the  Big Bang Chelsea FC, at Stamford Bridge Stadium.

Limited to 200 pieces, it features a 44mm stainless steel case and a bezel made of carbon fiber and blue Texalium. Its blue sunray dial includes three counters at 3, 6 and 9 o’clock, the latter being proudly engraved with “SW6”, Fulham postcode where Stamford Bridge is located.
The high end watch brand has also partnered with Juventus since 2013 and recently unveiled the third watch in its dedication to this great Italian team. 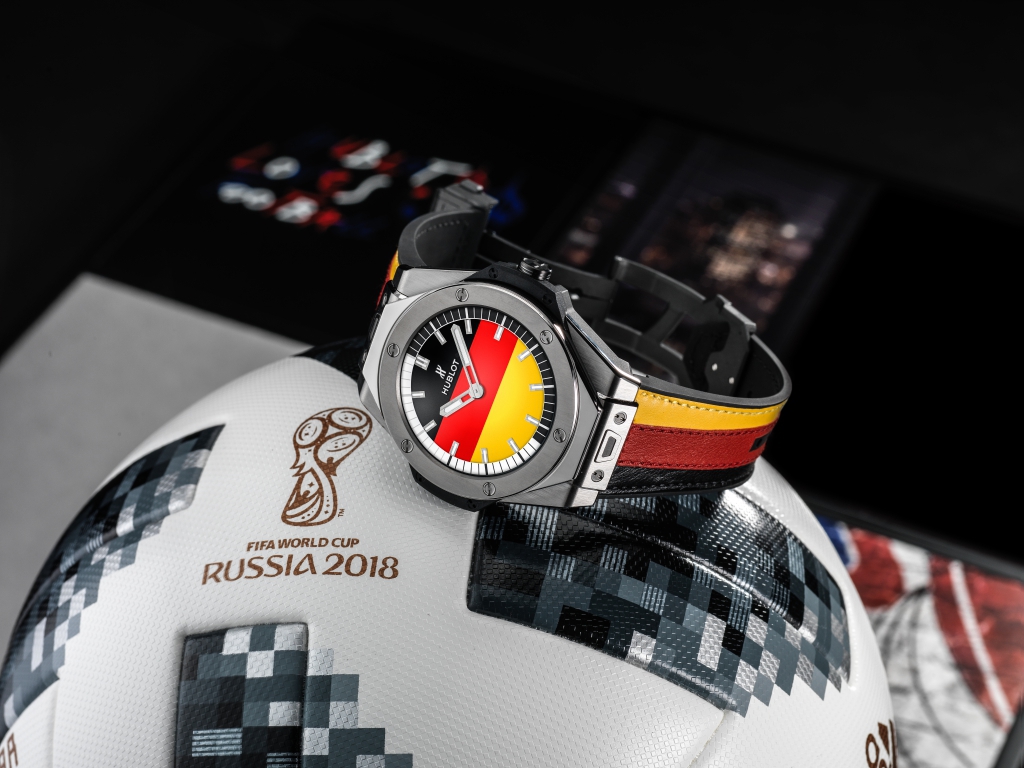 The new limited edition Classic Fusion Chronograph Juventus comes with a HUB1143 self-winding chronograph movement in a polished satin black ceramic case and bezel with black ceramic base that houses the carbon fibre, marked by 6 titanium screws in the shape of an H. The team colours of black, white and some yellow dominate. It’s only produced 200 pieces which each come with a Juventus football kit autographed by one of the stars of the team.

And demonstrating the power in football of José Mourinho, Hublot also has an ongoing partnership with The Special One. Hublot made a special edition of 250 pieces for the watch fanatic Manchester United manager. The King Power Jose Mourinho Special One Men's Watch is made from blue carbon fiber and dark blue rubber with 6 H-shaped black PVD titanium screws, has an automatic movement and has an oversized 48 mm case.

But it’s not just teams and footballers the brand works with - it also sponsors key football awards like the Golden Foot Award which was set up to give football fans a voice, as its they who choose the winners rather than the experts. In 2017 Iker Casillas was presented with his Hublot Golden Foot Award trophy, as well as a Hublot Big Bang watch On the field
And last year the brand stepped up the pace even more. Hublot was there as the third partner at a charity match between UEFA and the UN - the first ever such match in the spring of this year. The ‘Match for Solidarity’  brought together footballing legends Luís Figo and Ronaldinho, and their legendary players for a common cause—the UEFA Foundation for Children—in a match in which a football became a symbol of hope.

It follows hot on the heels of other charity matches that were organised at the Basel watch fairs. Hublot organised a “Match for Peace” and a “Match of Friendship” and was the official timekeeper both around the stadium and with the referees. Hublot has also been arranging charity football matches in Dubai. Together with Ahmed Seddiqi & Sons and Pelé, Hublot touched down in Dubai to host a game at the Dubai Opera Hanging Garden  between Marcello Lippi and Pele’s team.

And Hublot isn’t stopping there - the brand has been instrumental in the previous FIFA World Cup in Russia last summer - creating the Big Bang Referee, which has been developed for referees. Hublot’s smart technology gave the referee notifications from Goal Line Technology live throughout each match.

The watches
As mentioned above, Hublot’s been cementing its place in football legend with the new Big Bang Referee. It’s a smart watch that connects you to every decisive second of the matches being played at the 2018 FIFA World Cup via your wrist. And if it’s good enough for the referees...no other watch brand has ever delivered such a thing. The watch was a direct request from FIFA who wanted a specific smart watch for their referees on the field. But other people can wear one too. And it doesn’t end there. Hublot has also has a new UEFA partner watch for the UEFA Champions League. This is the 3rd year the brand has partnered with UEFA and the third watch in this line, the Classic Fusion Chronograph UEFA Champions League, is an all blue affair with a tone on tone UEFA logo on the dial, blue alligator leather straps and polished blue ceramic. Hublot’s brand ambassador Pelé also launched it last month.
Tags
WatchesSport
Share