A name to remember

Eric Loth named his young luxury watch company after an English master clockmaker, but how has he evolved how watches are made?
A relative newcomer to the luxury watch industry, Graham might not have its own illustrious history like many other Swiss watch brands, but it has been directly influenced (and named after) the father of modern watchmaking, George Graham. 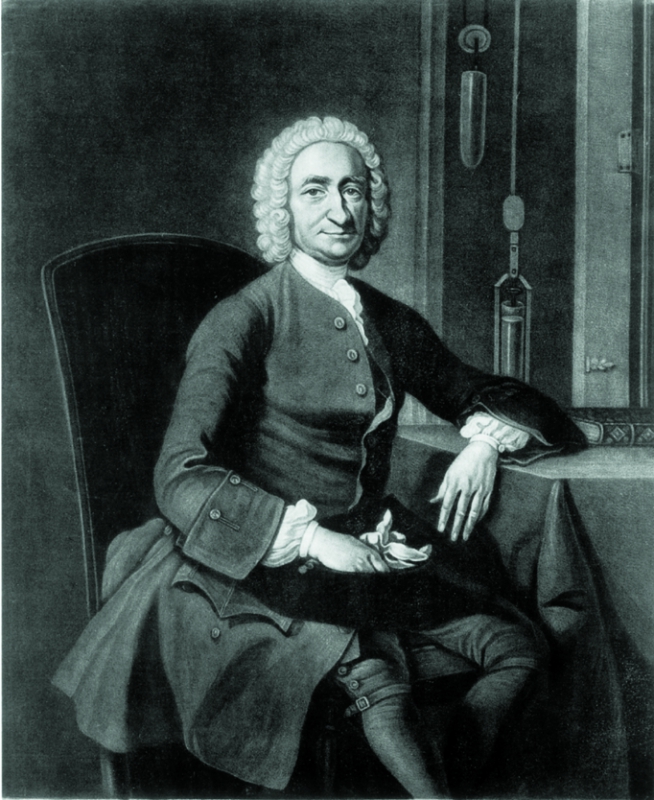 George Graham was an esteemed London clockmaker, who became Master of the Clockmakers’ Company in 1722. He went on to create and patent the modern ideas of the cylinder escapement and introduced it to all his watches in 1726 – effectively making British watchmaking the best in the world. Added to this he invented a wall chronograph in 1720 and the mercury pendulum in 1726 plus he made nearly 3,00 watches. He also built the clock at the Greenwich Royal Observatory, which has been used by hundreds of scientists, astronomers and physicists.

It’s no wonder then, that modern watchmaker and Graham’s founder Eric Loth felt a kinship with this master engineer and resurrected his name as a new brand in 1995, as a byword for forward thinking, cutting edge timepieces. 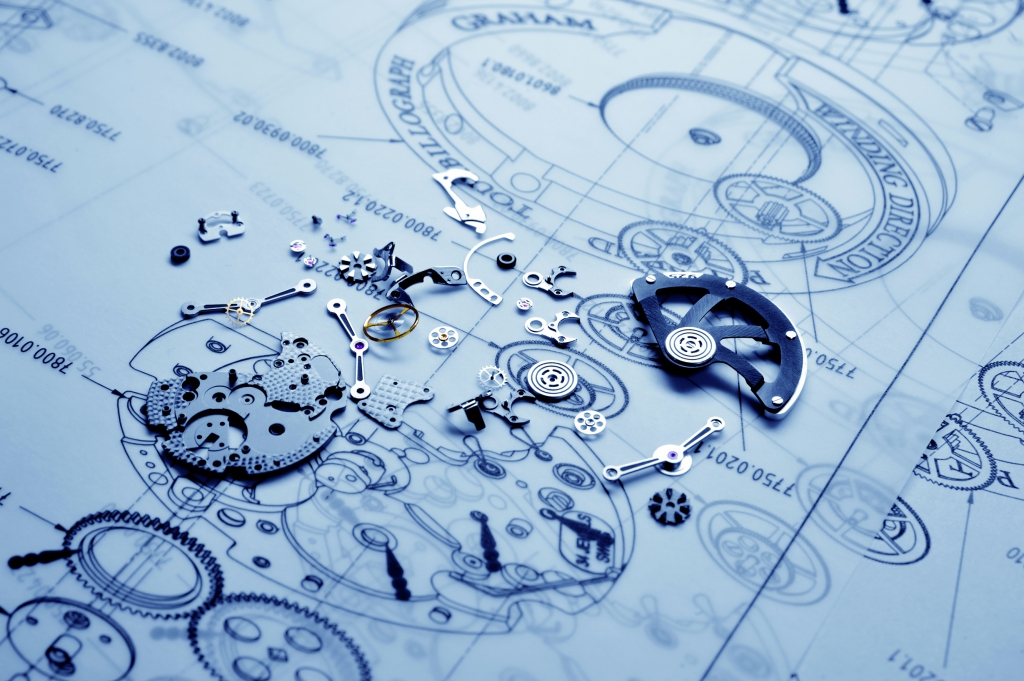 While George Graham certainly was a man ahead of his time, so too is Eric Loth. Having been responsible for the product development of the Swatch Group, in the early 90s, Loth decided to create a brand that combined his passion for innovation in watchmaking with his loves of racing (he’s a competitive driver in races such as the Swiss Porsche Cup), rock music and contemporary art. His watches, all of which he is involved in personally, have an edge not found in older, more established brands. They certainly are luxurious, and some of the most technical on the market but playing it safe isn’t Graham’s style.

With a mix of British history and Swiss technical precision, Loth has built Graham into a serious player in only a few decades. Its ambassadors (it’s not the usual A-lister line up) reflect Loth’s personal interest in sports, arts, racing and music. Graham’s ‘people’ include The Prodigy singer Keith Flint, contemporary artist Olivier Mosset, author Randy Wayne White, baseball pitcher CJ Wilson and Guy Martin, a British professional biker. The brand’s huge popularity in Asia is also acknowledged through its ambassadors which include Andy Hui Chi-On, a pop star and actor from Hong Kong and Jeff Wang, a Singaporean singer. 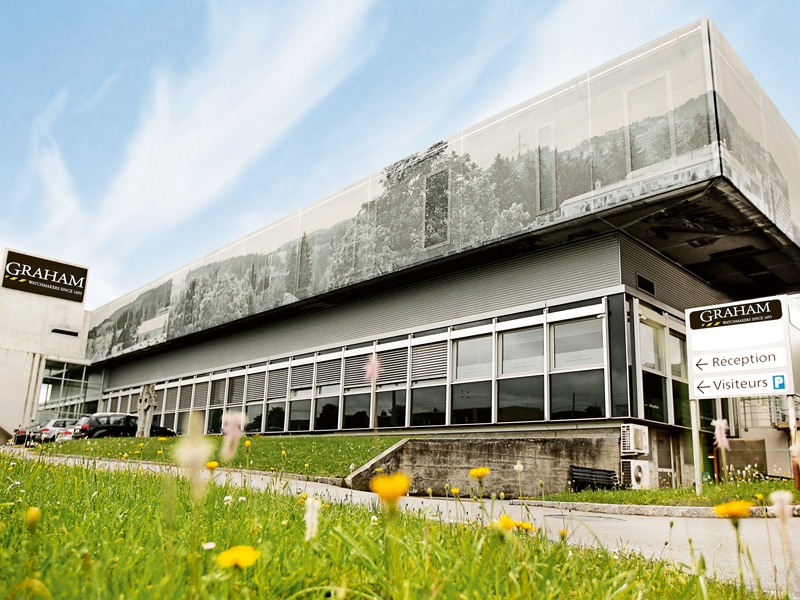 And it’s not just in the choice of ‘people’ that we can see Loth’s love of racing. He was the first to introduce bright colour straps to the luxury watch market, reflecting the love of primary colours that racing car drivers have and earlier this year brought out the brand’s latest in a collaborative line with Silverstone, the world famous motor racing track.

The Silverstone RS Racing trio of watches all feature dials that echo car dashboards, tyre tread-like rubber straps, a tachymeter to measure lap time and tough casing so they are shockproof in all situations. Each one screams performance, adrenaline and speed, and you can’t help but be impressed at the level of detail. 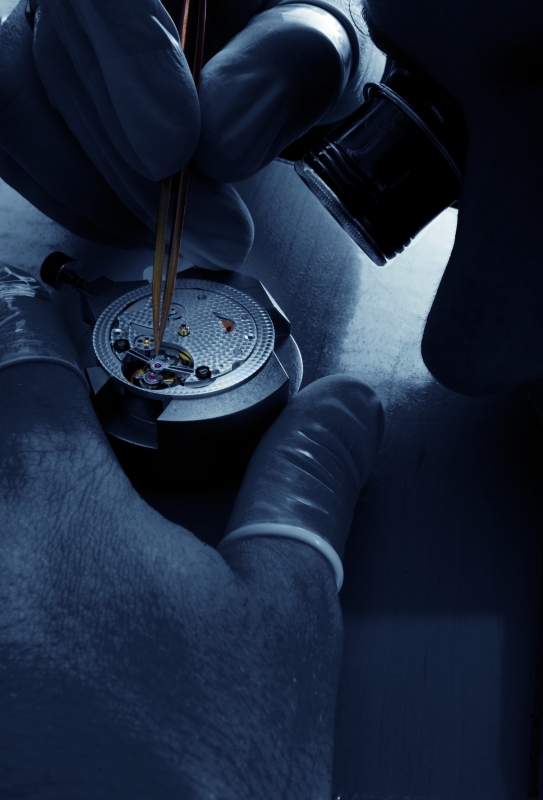 Graham has been instrumental in introducing more lightweight materials to the luxury watch sector, such as ceramic, aluminum and carbon to better reflect Loth’s passion and experience in competitive driving and modern engineering.

These can all be seen at work in the brand’s super impressive line of Chronofighters that are as luxurious as they are cool. The Chronofighter Superlight Carbon (which debuted in January of this year) is the first carbon-made Chronofighter that uses unprecedented machining processes inspired by non-horologie influences. Taken by carbon’s use in the aeronautic and sports industries where is used because it’s light and strong but malleable, Graham made a case of carbon nanotube speckled composite. 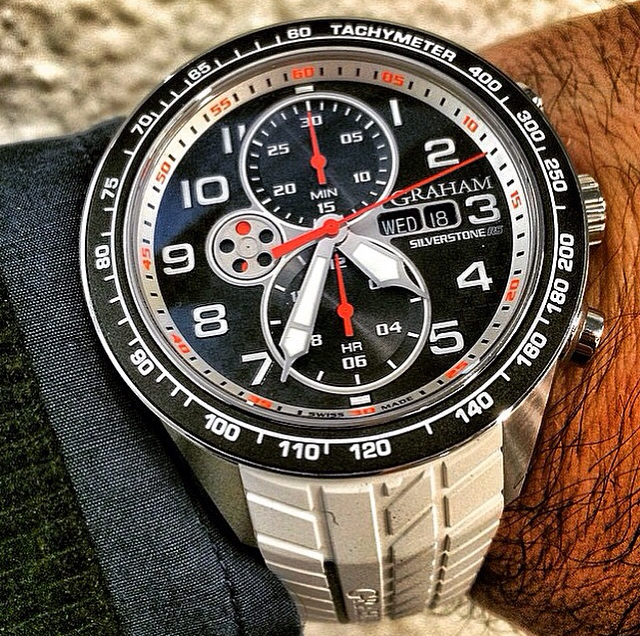 The Chronofighter Superlight Carbon also comes with a carbon fibre trigger for the tachymeter, as an updated version of the stopwatch and a carbon fibre buckle to make it as lightweight as possible. It perfectly showcases how Loth’s engineering expertise has been brought in to expand what is possible within the world of watching making and why it makes Graham such an interesting company.

Ceramic dials, top quality diamonds, a sapphire crystal bezel created from an entire 3D crystal, with the excess thrown away – Graham don’t make things easy for themselves, but then that’s not what their watches are about – you’ve got to love the details because that’s what you’re buying.

And despite the English heritage, the brand now is made up of solely Swiss movements, created near Loth’s home in La Chaux-de-Fonds, the watchmaking capital of Switzerland.

Loth’s passion for engineering and innovation means Graham has become more than just a watch-maker, the time-pieces represent a way of life, where nothing is impossible.

Chronofighter Oversize Superlight GT Asia
With only 88 pieces ever made, this super limited edition that celebrates the GT Asia comes with white or black rubber straps, date window at 8 o’clock and a Calibre G1747.

Geo Graham Tourbillon Orrery
For a sleeker, more classic model the Tourbullion Orrery is something very special. Just 20 pieces exist and the face shows a 100 years calendar of the solar system with a year counter on the back. It features a calibre G1800, high precision mechanical movement exclusively made for GRAHAM by Christophe Claret with Haute Horlogerie finishing.