Career: “My name is Demy de Zeeuw and I am an 32-year-old ex-professional footballer player from Holland. I would say I have been playing football almost my entire life, starting at the tender age of 5 when I began playing. From the beginning I realized I was better than most of the boys of my age and I trained very hard before moving from an amateur club to a professional club at the age of 12.

When I was 18 I secured a professional contract and in doing so began to actually get paid to play football. At the age of 21 I transferred to AZ Alkmaar and it was really exhilarating to be playing football at such a high level. During my 4 year stay with AZ Alkmaar I would be part of a championship winning team - a feat the club had last achieved 28 years earlier. Off the back of this success I was finally transferred to Ajax Amsterdam when I was 24 and this was a dream come true because for me this was the ultimate team to play for. I would go on to not just play for the above mentioned teams but would also play for the National team which gave me the unique opportunity to play in the World Cup held in South Africa.”

How supportive was your family?
“My father had to take me to every club and every training session, especially at the beginning. My whole family supported my dreams and made a lot of sacrifices along the way.”

How was your training regime?
“I trained almost every day and if I wasn’t training I was busy thinking of the next training session or the next match – and if I was off, it was not like I could just eat whatever I felt eating like because I had to watch my weight and many other factors because as a professional athlete I had a certain level of responsibility to my team and fans.” 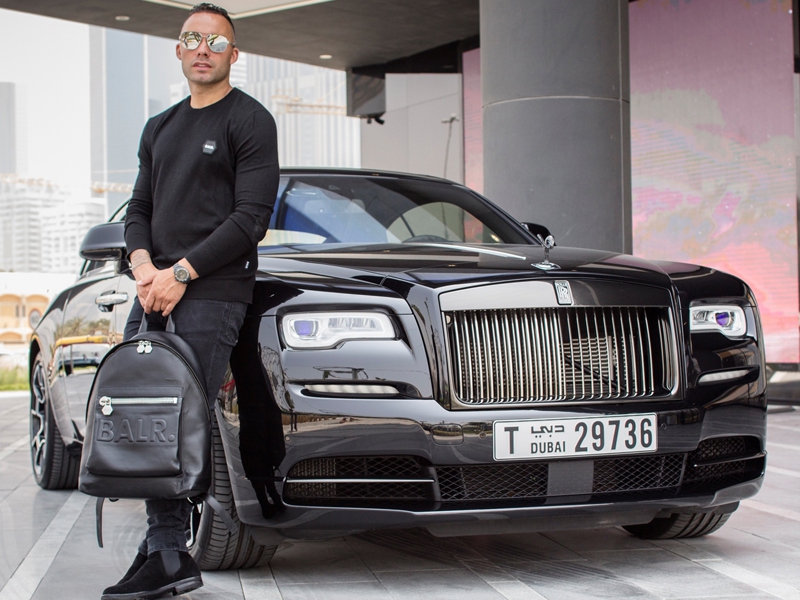 Which was your best Club and why?
“I think Ajax Amsterdam was the best club I played for but AZ Alkmaar was the most fun because there was a real true friendship. It was not as big as Ajax so if we lost it hurt but that was that and we moved on. At Ajax there was always immense pressure to win every game since a loss would be catastrophic to the club and fans and such pressure was really difficult to manage at times. I was at Ajax for 2 years before I received a very good offer and went to play in Russia.”

How was it playing for the national team?
“It was indeed a great honor. It was so special when you would hear the national anthem and see all the supporters in their orange t-shirts. The world cup I participated in in South Africa was amazing with great views and super friendly people.” 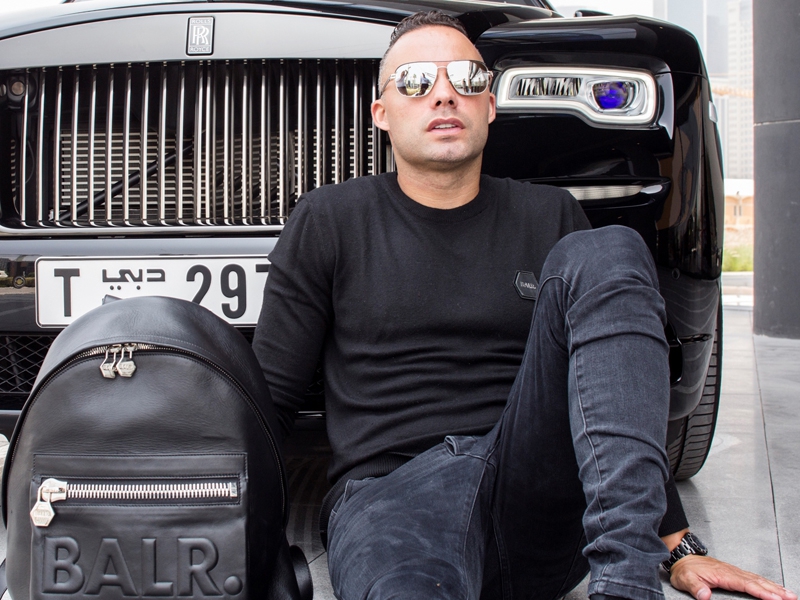 Describe your World Cup experience
“For me, the world cup had 2 parts - Firstly, the highlight of that world cup was me playing in the semifinals. However, it was also in the semifinals that I was kicked in the mouth – An injury that would cause tremendous problems and prove really hard to recover from.”

What would you say is the best thing that ever happened in your career?
“I would say the championship with Ajax Amsterdam on the last day of the competition – we had a lot of pressure as we had to win at home and fortunately we did. The emotions on the day -  the 15th of May 2010, were so immense, making this easily the best day of my career. The semifinal day of the World cup was also special but because of the injury I always have mixed emotions about it.” 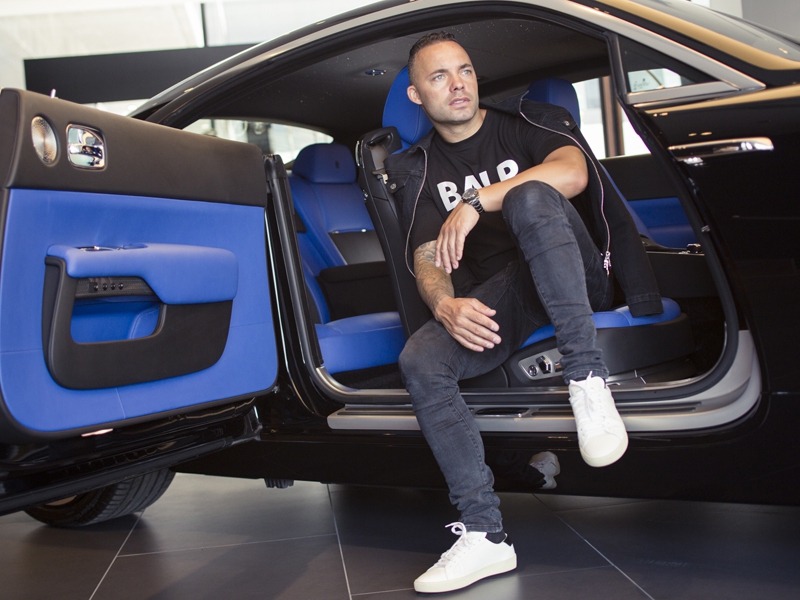 How are you finding family life?
“Great. I have a 2-year-old daughter now and while football allows you the opportunity to have a lot in material things as soon as my daughter says ‘daddy’ nothing else matters – I just want to make her happy.”

How is your flagship brand BALR. doing and why did you start it?
“It is going very well. I started it when I was in Russia after I felt that all the players sported the same branded bags and accessories and I wanted to change that and create items that were more elegant. So I began looking with my business partner and came up with the name ‘BALR.’ We checked and it was free to use so we acquired it to create a brand that accentuated the lifestyle of football players and successful young men since no brand did this and we wanted to claim the sector. We thought, if a footballer was free to choose, which hotel would he visit? Which restaurant would he go to? What holiday would he choose? Which other celebrities would he meet? This type of information was all fused with our Marketing in order for our brand to hold more relevance to the intended audience. 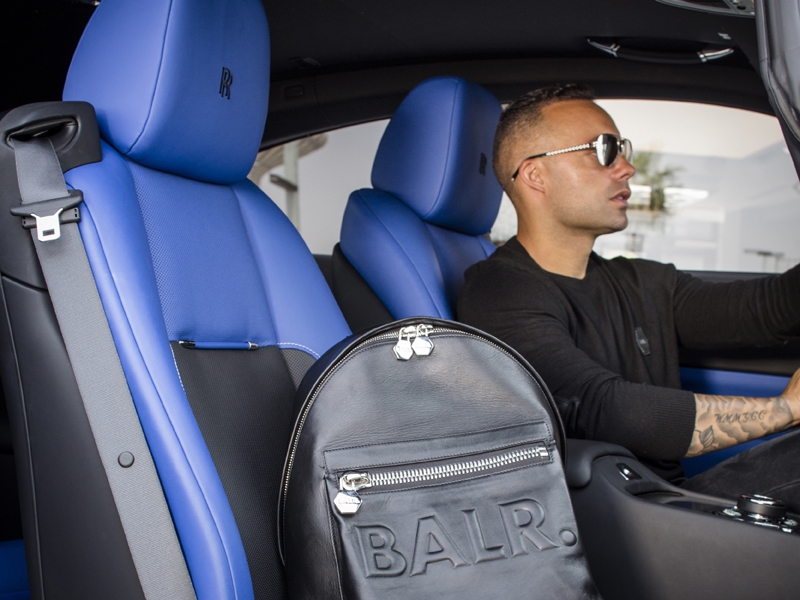 In the future we plan to open shops in areas such as Dubai. Currently in Amsterdam we are doing really well with our online presence as well as now having a shop where the fans come and meet us and check on latest collections coming out. We started with only t-shirts but now have expanded to bags, shoes and next month we will begin chartering boats as we try our best to diversify.”

How did the boat venture start?
“Well I go to Ibiza a lot and would see people chartering boats. When fellow footballers and friends would go they would always ask me where to rent boats from and I would always send them to one particular guy before I thought of doing the actual chartering of boats myself. This is how the idea came to fruition.”

What is happening now?
“Well Oscar reached out to me to do a collaborative photoshoot in Dubai with Rolls Royce which I had no problem doing. I was initially meant to come in December but due to delays I have come to do the shoot now. I absolutely love the Rolls Royce as it really fits the ‘BALR.’ persona.” 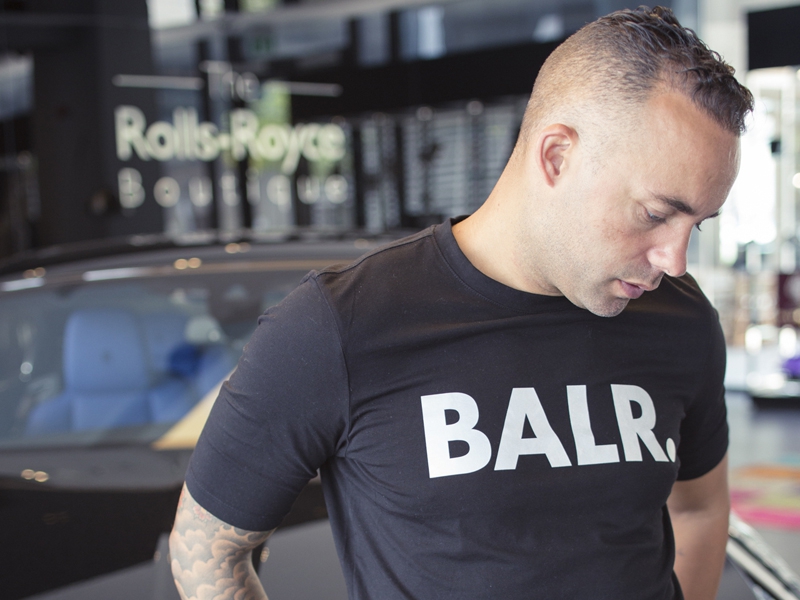 Do you have some words of wisdom?
I would say that ‘If you work hard you can do anything since with hard work can come great success. Sometimes you have to take the chances you are given and above all you must believe in yourself. If you really want something you have to understand that it is your mindset that governs your actions. A lot have talent but it is how they use it that controls the outcome.”


How big are you on Social Media:
“Social Media helps a lot because in the last 4 years we have amassed millions of followers on Instagram with approximately 1 million video impressions every month. We use Social Media well as a marketing and sales tool which is where I feel most brands fail as they are too focused building an image only as opposed to also focusing on sales.”

Gadgets:
“I am an Android man – we (the brand) actually have a deal with Samsung”

Fashion:
“I wear a lot of brands – not just BALR. For example, a favorite brand for me is Yves Saint Laurent because I like black, white, grey and dark blue – just like our color scheme at BALR. We don’t tend to use ‘on trend colors’ such as Red because we love to use basic colors.”

Watch:
“I am actually wearing a Rolex that has been customized to be a BALR. by Titan Black. We have limited this to 25 pieces and a number of them have been sold since we put them onto our Social Media to DJs, Footballers and wealthy Arab gentlemen.”
Tags
SportBusiness
Share