I’VE ALWAYS BEEN COMFORTABLE IN MY OWN SKIN

David Beckham on fame, family and the launch of his new brand House 99, fashion, style and botox.
David Beckham was shocked to see a comment on social media — ‘and I never usually really look at comments’ — suggesting that he’d had Botox. ‘Someone was like, “Botox is looking really good on David Beckham,”’ he says. ‘And I was like’ (he exaggerates sucking in his breath) ‘“But I’ve got so many lines and wrinkles, how can someone think that?”’

My eyes flick to his forehead. It has a healthy sheen, bouncing the dim light in the cinema where we’ve met, the subterranean annex of a trendy Shoreditch restaurant. Such glassy perfection could easily be achieved with an acid peel. And Beckham, I’m learning, is not averse to a facial. Or indeed, as he calls the whole faff around face wash and moisturiser, ‘a skincare regime’.

For the record, he continues, Botox is a no-no. This is where the line is drawn. ‘So definitely cosmetic surgery might be okay for some people; I’m not saying it’s bad. But for me, personally, never. Never! I have no interest in doing anything like that, ever. Growing old gracefully is my thing. I would never inject my face. Or my backside, obviously.’ Sorry, what? ‘Some people have fillers in their bums don’t they?’ he asks. ‘I don’t know, don’t they? I assume they do.’ He throws the question out to the gloom of cinema seats where a team of PRs starts tittering. ‘I don’t know whether it’s a thing,’ he continues, ‘but I definitely haven’t done that.’ 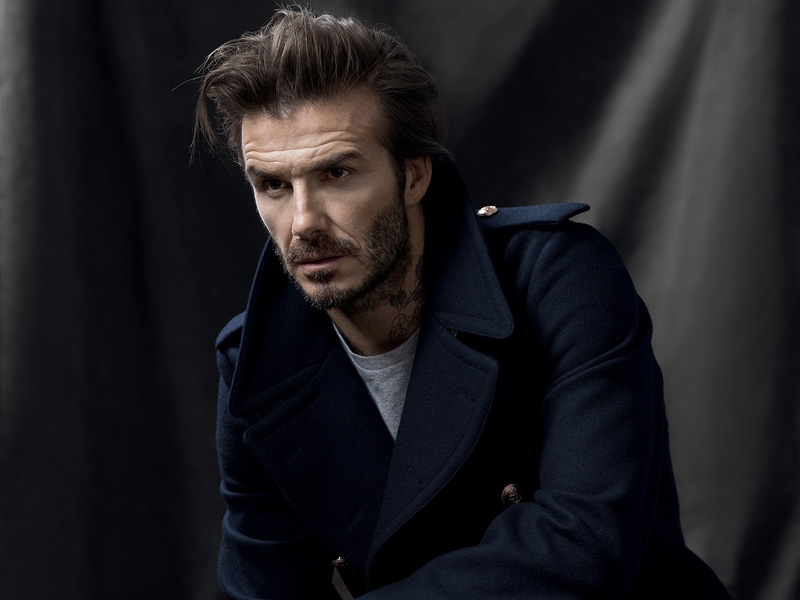 It has been only about two weeks since I last interviewed Beckham — that time about a clothing range he had put his name to. ‘Another day, another endorsement,’ I offer weakly as I shake his hand again. Indeed the David Beckham of today, the soft-faced, squint-eyed style icon is made up of multiple parts of advertising space. His feet belong to Adidas, his underarms to Superdrug, his arse to H&M and his jaw once belonged to Gillette. Today we are doing face creams, hair gel, tattoo preservative, beard balm and beard oil.

There are several layers of assistants and PRs in attendance, all coiffed, quiffed and dressed in black. It’s a well-oiled machine. Fortunately Beckham is prone to wander off topic of his own accord. He is quite happy to talk about the early days courting Victoria, then Posh Spice. She called him Goldenballs, he called her Long Legs, ‘because when we first met, in every picture as a Spice Girl, she had these long beautiful legs’. They would sneak into a Harvester car park and snog furiously in the back of his car. It was the only place they could go without being papped, he says, adding: ‘We led such a glamorous life.’ 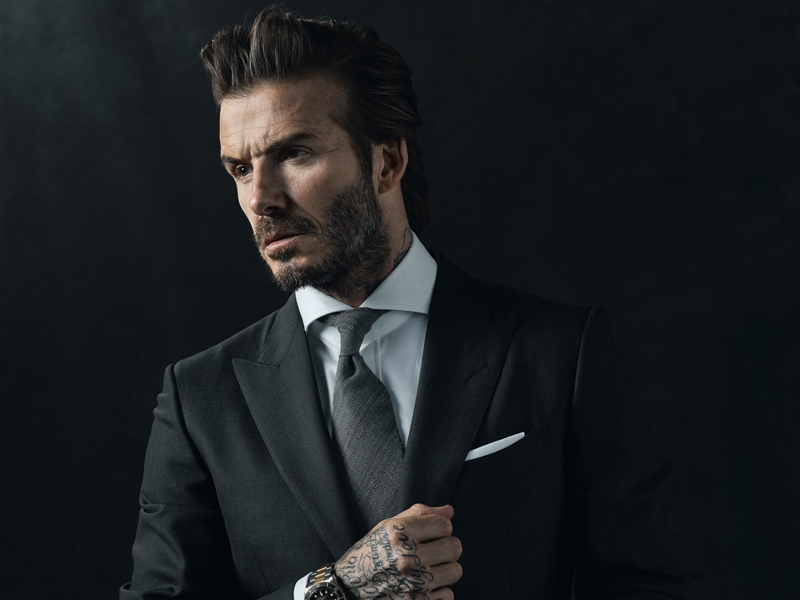 It sounds wonderfully teenage. ‘And I had sunburn one week and she turned up with a big aloe vera leaf. Not the whole pot, but like a whole leaf.’ He snorts. ‘That was the start of my male grooming.’ (Later he confesses that for years he ‘stole’ Victoria’s moisturiser from ‘her side of the cabinet, which she doesn’t know’).

Following that frugal start, they went through a stage of being excessively flamboyant in their gift-giving. Cars, gold, houses. ‘We used to be very extravagant in what we’d buy each other,’ he says. With no apparent irony, he adds: ‘But we’re obviously saving the pennies now because we have so many children to be extravagant with.’ Evidently Beckham’s financial success has not erased the memories of an East End childhood where his father, Ted, worked all hours as a gas-fitter and mother, Sandra, worked days and then cut hair in the kitchen at home from 6-11 o’clock in the evening.

‘So it’s the simple things, really,’ he continues on romance. ‘It’s more about spending time together, going for a simple dinner together. Having a nice bottle of wine together.’ It’s clear from talking to him that the David Beckham of today is reflective and family focused.

Later we roam into the subject of crying. Beckham loves to sob through a good film on an aeroplane. The last one was Churchill — ‘It was great. But I could be watching an episode of Friends and I would get emotional.’ He’s totally unabashed about crying. He blames the altitude, then wonders if it isn’t the effect of having kids. (He has four: Brooklyn, Romeo, Cruz and Harper.) ‘When you have kids you definitely become more emotional as a person. I definitely feel that anything that relates to me — family, the kids — that’s always something I’m going to get emotional about. I cried when they were born, of course.’ 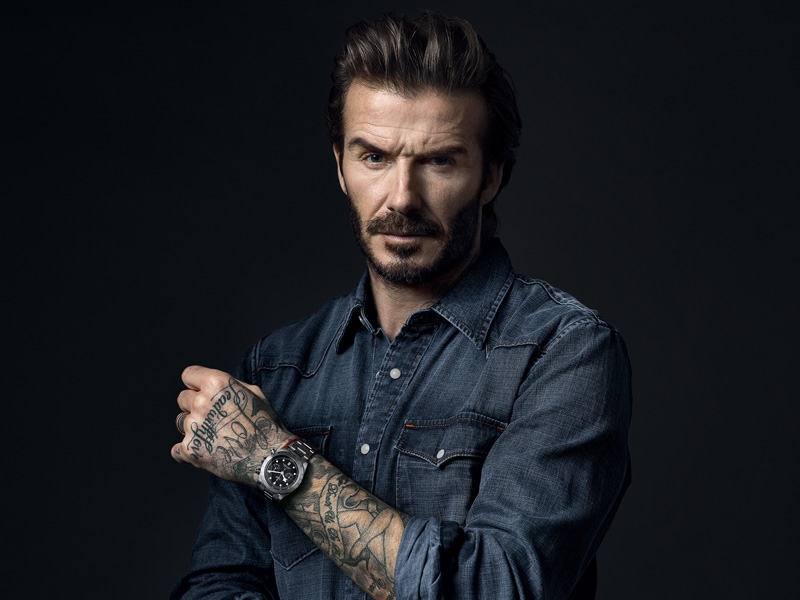 He has an interesting pattern of speech. He repeats, for instance, ‘I do, I do’; ‘Without a doubt, without a doubt’; ‘Of course, of course’. His favourite words are ‘obviously’ and ‘actually’.

So if not Botox, what is the most extreme thing he has ever done? ‘I didn’t personally do it, it was done by someone else’ — having his eyebrows plucked. ‘They were like flying all over the place. But they took too much off one of my eyebrows, and I was like, “Oh my God, my eyebrows are not masculine anymore!” They were thin. So that’s one thing: I don’t touch my eyebrows. I let them grow naturally.’

The kids ‘take the piss’ out of all his posing. Only this morning Romeo was mocking his Blue Steel. ‘He turned round and said: “Dad, why do you look like this in all pictures?”’ He mimics Romeo doing the pose: narrowed eyes, smouldering, hard jaw in profile. ‘And I was like, “I don’t know. But now you mention it, that is it.”’ He says it doesn’t seem to have harmed him, ‘but I’m going to have to work on a new look’.

His kids do sound funny. He loves talking about them. Do they ever have tantrums? ‘Yeah, of course. I have tantrums, too. All the time.’

Beckham’s ability to enthuse on the products he promotes is admirable. When he visited the L’Oréal factory in Paris, he tells me, ‘it was an eye-opener. I didn’t know how much went into all of this. Obviously to sit down with all the experts and talk about the different textures, the different oils, the different creams, the different lotions that you can have…’

There’s charcoal and some kind of manly volcanic ingredient in the beard products. The beard thing, ‘really is a real thing’, he insists. ‘It’s been going on a few years. When I really grew mine Victoria would say: “You really need to scrub it more, you really need to moisturise it more.”’ Was he like Roald Dahl’s Mr Twit, I ask, with a beard full of food? ‘She was like, “You really need to put hair conditioner in it and make it softer.” It actually did.’ (The PR gives me a sample. I have no idea where I am supposed to test it.)

When I ask how the collaboration works, Beckham is earnest. ‘My input was always, “I don’t like anything too overpowering or too oily. I don’t want to be feeling sticky.”’ He’s funny. I ask what scent he likes. ‘Apart from my own?’ he quips, threatening, for an instant, to sniff a pit.

Actually what he is crazy about is scented candles. At home he lights them up like a conductor lights his orchestra. The house is ablaze with tuberose and fig. ‘And I do like classic woody smells. My house is full of candles. I am a big candle freak.’ He’s also a wine freak. He has a cellar and a ‘whisky room’, both spaces he designed himself, he says.

Victoria shares his interests. He’s educating her on fine wine. ‘Victoria didn’t really drink wine up until very recently so she has all of a sudden discovered my passion,’ he says. She never drank wine? ‘Well she went through a stage of drinking a nice Blue Nun and a little bit of Lambrusco,’ he laughs, ‘but now it’s changed. I’ve introduced her to good, decent wine. I love Californian reds. I love the buttery-ness of Burgundy. Montrachet, I love. Cheval Blanc is one of my favourites.’

And he also loves the countryside: camping, riding (bikes not horses). ‘I like being in nature. I love being by the sea, but being around the woods and the trees is something I love. I go riding on the bike with friends and we camp. We sometimes go into the deserts, into the mountains; we just spend a lot of time outdoors.’

Does he like being alone? ‘Actually I don’t mind it,’ he says. He jokes that occasionally he hides in a cupboard for solitude. ‘But I moved away from home when I was 15 and so I lived alone for quite a few years. And I’ve always been comfortable in my skin to go for dinner alone, or go and watch a movie alone. Over the years I’ve definitely done that. Now, I have a million kids.

‘But yeah, I definitely look for privacy. I’m definitely not a… I’m much more of a private-type person than you think.’ I’m not surprised if he craves solitude because Beckham is really worshipped out there. Walking down the street is not funny. ‘I am always conscious of it because I don’t get to walk down the street and not take a selfie at some point or not be recognised. I’m okay with it. I’m not rude to people if they come up and ask me. I’ve come to terms with how my life is.’ The only time that he tears through the fourth wall is if he sees someone being rude. That’s the thing that makes him angry. He’ll pile in to help out a waiter or shop assistant if they’re being talked down to. ‘I’ll say, “Show some respect”. It’s as simple as that, I think.’

‘Virtually’ the only place in the whole world he hasn’t been recognised was in the Amazon rainforest when he met the Yanomami tribe, the largest isolated tribe in Latin America. ‘And they did not recognise me,’ he says, lifting his voice with happy surprise. ‘But they also did not know what football was. So I took comfort in that as well.’

Inevitably our chat time is guillotined. I say that I hope he is spared being interviewed by me again in the next couple of weeks. ‘I’ll bring something else out so we can get together again,’ he jokes.

‘Maybe an arse serum,’ suggests one of his entourage.

David becomes animated. ‘It wasn’t a serum, it was an injection. I don’t inject my butt. My butt is okay, actually.’ He casts around again: ‘Isn’t there fillers you can get that pump your bum out?’