Boxing is your father's sport!

UFC Warrior King Dana White on Creating a $4 Billion Fight Empire, Steroids in Sports, and what fans would never guess about him.
At what point in your career did you know that UFC was going to be huge?
The first time that I ever sat in a live event and I started looking around and I started going, “Man, if they did this and if they did that, this thing could be big.” I believed in this thing from the first time I sat down and watched an event, before we ever owned it.

What’s the hardest decision you’ve had to make as a boss?
The toughest decision you ever have to make is letting somebody go. When you’re taking a job away from somebody and their family lives on that, in whatever town it might be, that’s always going to be the least fun. 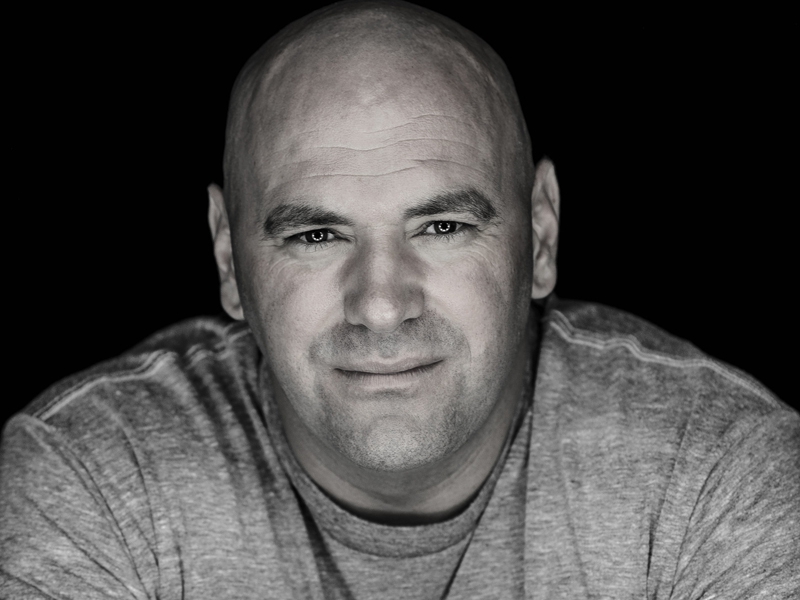 What are your biggest pet peeves as a manager?
Number one? When I call my employees and they don’t answer their phone. You better answer your phone. Number two: the people who come in at 8:59 a.m. and are out the door at 5:01 p.m.—you know, the absolute nine-to-fiver who wants the weekends off. Don’t get me wrong, you can’t have a business full of die-hard people who are going to be there 24/7, but it’s a pet peeve having somebody who works for you who isn’t into it and isn’t passionate about what they’re doing. They’re just there for a paycheck. People think I don’t notice, but I do.

If you were sitting down a young aspiring fighter, what’s the fighting style you’d tell him to master to excel in the UFC today?
Wrestling. The fact is, if you have a good wrestling base, you can pick up all the other things. Wrestlers traditionally do pretty well in the UFC. 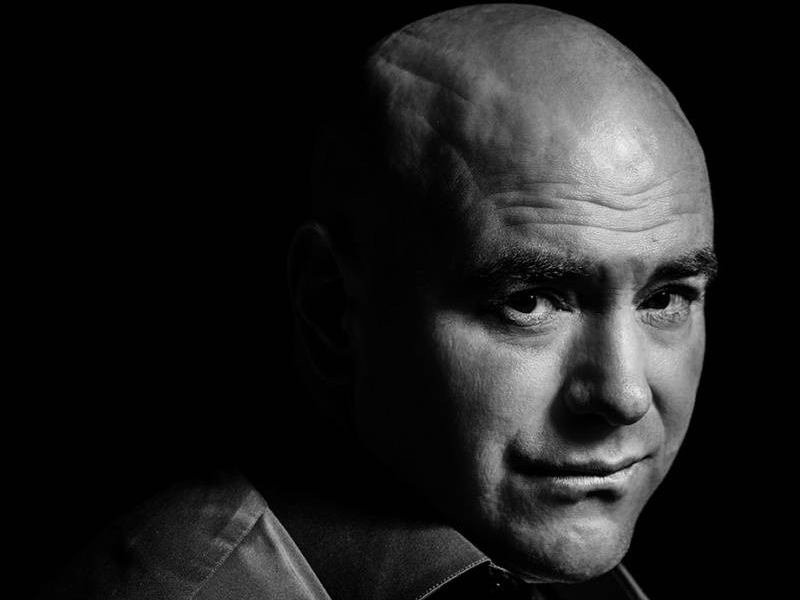 Your confrontational management style gets a lot of attention. Do you think young guys can learn from it?
Funny enough, when I was younger, I was a thousand times more aggressive than I am now. When I see these guys, like Vince McMahon [of the WWE], who is 71 years old, and he’s still just an absolute animal, it’s super impressive to me. I’m 47, man. I was obviously a lot more aggressive when I was younger and we were building the business. I think that’s normal. When companies are killing it and doing really well, you get a little fat and bloated.

But I wouldn’t call you fat and bloated. Today, you still don’t shy away from calling out your fighters in the press, for instance. Can you explain the thinking behind it a little bit? Basically, from your perspective, is it a conscious managerial tactic or is it just you being you?
That’s a good question, because there’s two different sides to that. With my employees at the UFC, I’ll never rip somebody apart in public. There are cases when—it happened yesterday, in fact—somebody does something really stupid on a chain e-mail. I’ll be the first one to rip you apart in front of everybody if you do something like that on a chain mail. Now, the difference with the fighters is if a fight just happened and I’m the promoter of this fight and your fight sucked, I have no problem saying, “That fight sucked,” publicly. The fans aren’t stupid and I’m not going to fool anybody into thinking they just saw a great fight when they didn’t. Hopefully that motivates you to put on a better performance in the future. This isn’t a team sport, where as a football coach, you come out and say, “We played bad today as a team. We’ve got things to work on.” This and that. There is no team here. It’s just you and another man or you and another woman. I’m brutally honest about it.

You’ve obviously been very successful financially. Do you find that success and wealth have changed you?
I don’t think so. What I do was never about the money. I did it because I loved it. It was what I wanted to do for the rest of my life. I always wanted to be successful at it, but you never think you’re going to be wealthy from it. That just comes along with being happy and doing what you love. That’s why when this deal went down, everybody was wondering if I was going to leave. The answer is: No. Then professional skateboarder Rob Dyrdek called me a couple of weeks ago and he says, “I’ve got to know one thing, man.” He says, “How do you run the race every day when you already won the race? How do you get up in the morning, strap your shoes on, and go to work? I’m so baffled by that.” This is what I love to do. The number that’s in your bank account doesn’t change the fact that you love what you do. People always talk about money. If you’re looking for money, you need to find a new job because you’re not doing what you love to do. 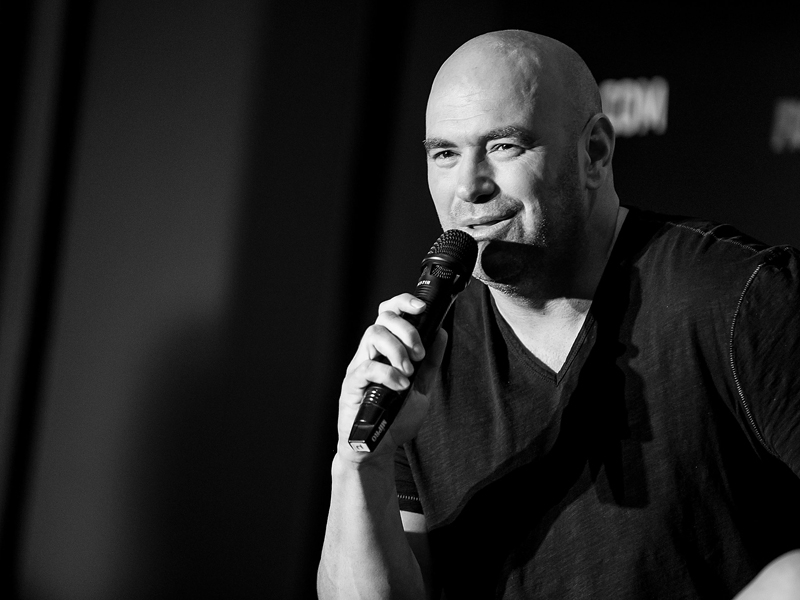 Do guys ever try to pick a fight with you? Does anybody say, “Hey, there’s the head of the UFC. That big guy. I can take him”?
Nobody has ever tried. Probably one of the funniest things ever is I was at the Mirage Hotel [in Las Vegas] one day. I pulled up and parked in valet. I got out and walked into the hallway, and this guy runs up to me. He’s like, “Oh my god it’s Dana White. I’m the biggest fan ever.” He was going f crazy. He turns around and his wife is down the hallway. He goes, “Honey, look!” He points at me. The wife shrugs her shoulders and she goes, “Howie Mandel?” All of us old bald guys look alike. That’s the weirdest thing that’s ever happened to me with fan interactions. Other than that, everybody is awesome, cool, and great.

What would your fans be surprised to know about you?
Well, every day since they started school, I drive my kids to school. And you know what I love to do? On the weekends I go to the grocery store and buy groceries. I love going to the grocery store—which is weird, I guess. At the end of the day, I’m not mowing my lawn or cleaning my pool or anything, but other than that I think I live a pretty normal life.

You had mentioned in the past that you’ve taken steroids when you were young. I know you don’t endorse them, but you haven’t quite condemned them maybe as harshly as some would think you should. What do you think about them and their role in sports? Is it really overblown?
I don’t think it’s overblown. Not in sports, but listen: When I took them in high school, we’re talking the late ’80s, and steroids were in a much different place back then than they are now. Pretty much everybody was doing them back then. Obviously, we’ve led the charge now in sports with our drug-testing program. But the big difference is that if you hit balls with a stick, who cares what you’re doing? I couldn’t care less. But if you’re fighting another human being and you’re using a performance-enhancing drug, it’s dangerous.

Has there been a big steroid problem in the UFC?
I think there’s a big performance-enhancing drug problem in all sports. Everything became so grey. If you talk to four different experts about steroids, they would give you four different answers. You know what I mean? But it’s the right thing to do away with it. If you need TRT, you’re probably too old to be fighting anymore, anyway. You should probably retire. 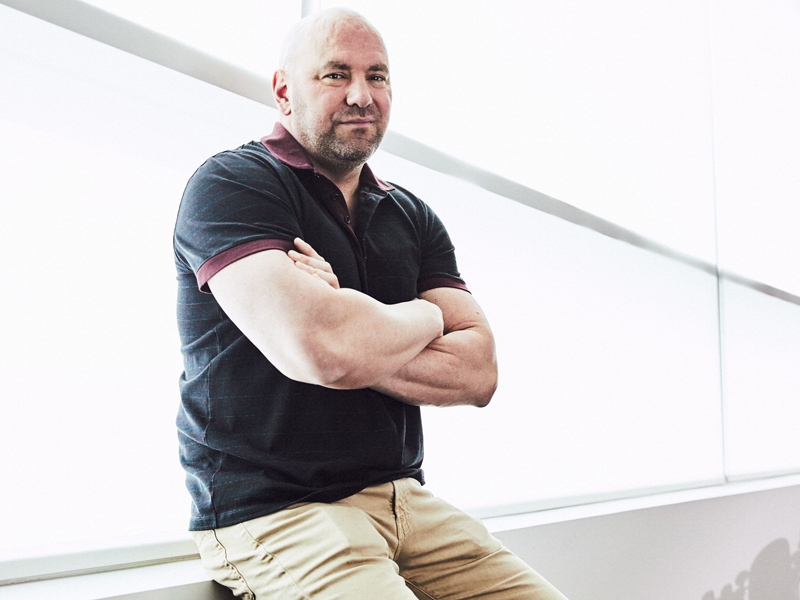 What keeps Dana White up at night?
Insomnia! I don’t know what it is specifically that keeps me up, but a lot of things. I lay in bed and I start thinking too much. It’s hard to go all day in building, and like I said, trying to take things to the next level and then shut it off at night when you go to bed. I try to lay in bed and watch…I try to watch stuff that doesn’t make me think. I’m a huge Family Guy and American Dad fan. I watch that. I try to laugh and not watch anything too serious. Then usually that helps me sleep a little bit.

Can you get by on very little sleep?
Yes, I can go on almost no sleep.

I feel like every article I’ve ever read about the UFC has referenced the John McCain phrase “human.” Have you ever talked to him or invited him to a fight?
When we did the 20-year anniversary special, John McCain actually was interviewed on it. He’s completely flipped on the UFC. You can actually credit him for where we are today, because if Sen. John McCain hadn’t stood up against it the way that he did back in the old days, who knows what would have happened? Yeah, McCain has completely turned around.

Do you have any regrets?
I honestly don’t think I have any regrets. I’ve spent as much time with my kids as is humanly possible while running my business and trying not to neglect either. I don’t know. I think in life, people always ask me about my legacy and how I want to be remembered and all this other stuff. I always say, “Listen, the only thing that matters if you’re a father and you have kids is when it’s all over and you’re lying there in that box, man, and your kids get up and your kids are like, ‘He was a great dad. He was a good dad. He was a great dad.’ If that wasn’t the case, that would be a massive regret.