Yes, that delusional woman would be me. And Nobu, is of course, the famous restaurant and infamous location of Becker's Broom cupboard - a bit like Murray Mound, only considerably steamier. It was here that the married father-of-two engaged in a notorious knee-trembler with model Angela Ermakova, resulting in a daughter, Anna, now 11. It might have passed unnoticed, had he not truculently disputed her paternity until a DNA test revealed that the little girl with his colouring, eyes, nose and mouth was indeed his offspring.

The imbroglio catapulted the former six-time Grand Slam singles champion and Olympic gold medallist from the back to the front page of newspapers across the world. He was divorced from Barbara Feltus, the mother of Noah, 17, and Elias, 11, and later re-married Lilly Kerssenberg, aged 34, with whom he has a son, Amadeus, aged one. His children, he professes, are "a blessing". 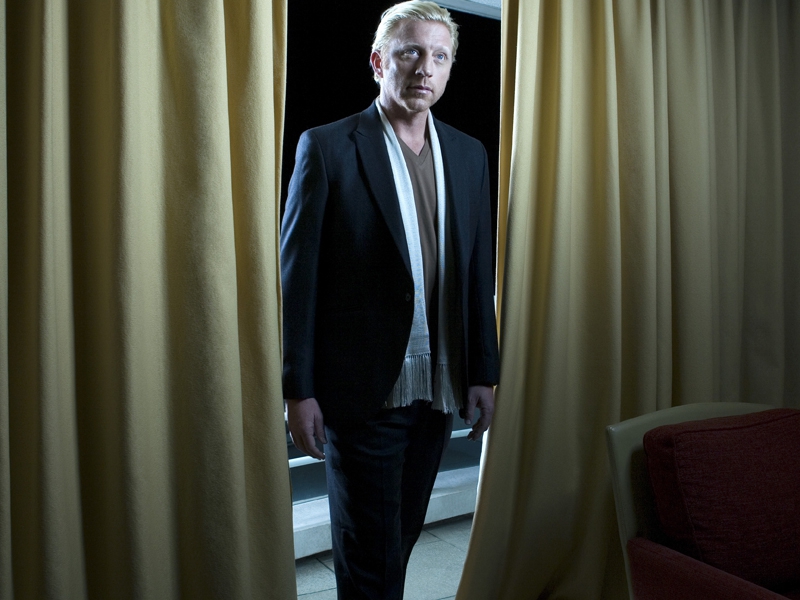 These days BB has segued into Becker the Brand and is as much a Wimbledon tradition as alarming Ladygrunts, over-priced strawberries and rain. Now a commentator, he is, officially, Britain's Favourite German (admittedly, not an overcrowded field) - proof that we're not xenophobic, actually. He's a BBC stalwart and has been a guest of the Camerons at Chequers, where he played mixed doubles against Dave, who, he claims, is a fine player (for a politician). And with the neatest of symmetry, Becker is a fine politician (for a player).

"He was very good," he says. But surely he could never have beaten you, I ask. Don't tell me you let him win? "I was a guest at Chequers and as a guest I knew how to behave," he chuckles. At this juncture, I'd like to state for the record that long before Sam Cam served up the half-time Barley Water, I was a little bit in love with the lad from Leimen. I was a teenager when I witnessed the 17-yearold Becker win Wimbledon in 1985; I recall blushing at the post-match interview, so entranced was I by his mesmerisingly pale eyelashes and heavy accent. As a result, my life altered forever. And now, here he is, radiating health, wealth and giddying waves of testosterone in his Ralph Lauren suit and absurdly clunking submariners' watch. His hair has grown blonder with age, but he cuts a formidable figure, like a powerful tiger in tailoring.

So, do I faint? Do I swoon? Of course not. I do what any self-respecting woman with a pulse would do when confronted by a dreamboat alpha male towering over her: I scold him in fluent Hochdeutsch. "Boris Becker, you are late! Such cheek! Such a liberty! I am a bit drunk and I have no idea who is going to pick up my children!" "Sorry," he says, unapologetically. "That's all right. I love you." I paraphrase, but you get the gist. According to Becker, I was misinformed about the whole interview timings thing, but he is briskly keen to get on with the matter at hand.

He has also, inexplicably, brought along two male German friends and announces, in a brookno-argument sort of way, that they shall drink beer and we shall all sit together. And so we do. His friends are gratifyingly impressed by my language skills - Becker doesn't even notice, which is immensely irritating as I have slogged my way through years of intransitive verbs for the day when he and I might murmur Rilke poetry to each other beside the Mosel
while sipping a complex Auslese. So I adopt a more proactive approach. "Boris," I tell him, firmly. "You are directly responsible for the fact that instead of a high-flying law degree, which might have made me rich, I studied a Masters in German, lived in Berlin and acquired
a taste for Riesling and married a man with red hair and multiple copies of the Ring Cycle." Becker nods as if this were normal. Which it so isn't. But he is here to talk about himself. And so we do. "I love it here," he says, of Wimbledon. "It's the oldest, most prestigious tournament in the world, played in a beautiful setting, on grass and very special. It was the first major tournament I won and July 7th is like a second birthday for me." Becker divides his time between Zurich and London and is flattered by Britain's affection for him. "I'm shown a lot of respect and a bit of love. I think they like me personally, too. For a German, I have a sense of humour, and people can tell that my fondness for this country is heartfelt. I wasn't surprised by the reports that the British share a lot of German genes, because although we don't like to admit it, we're more alike than not. We look a bit similar, we like the same sort of hearty food, like meat with mashed potato, we love our football and we're very patriotic."

How could an alliance built on mashed potato ever falter? Becker, who retired in 1999, also commentates on football and other sports as well as running three Mercedes dealerships, Boris Becker TV (OK, I might have tuned in once for research purposes) and assorted business projects. He plays golf and has a handicap of 7.2. Precisely. 'I'm fortunate to have another career. It's tough when you retire from sport at 30 or 34 and have to reinvent yourself and find another way of living, new goals, new incentives." He was found guilty of tax evasion in 2002 - "mortifying", by his own admission - and last week headlines screamed that a house he owns in Majorca had been "seized" due to an unpaid bill. "The media exaggerate because the truth is quite boring," he shrugs with elegant disdain. "It's nonsense to say the house was taken away. It's the old story that somebody wants more money than they should and there's an ongoing court case." Becker provided his fair share of stories after he and his wife split up following his brief encounter - the tryst, he later revealed, technically occurred on the stairs, not in a cleaning cupboard, but it ruins the magic, so the myth persists. But while his dalliance seemed outrageous at the time, in the light of Tiger Woods's serial philandering and Ryan Giggs's playing away, his peccadillo verges on the sweetly old-fashioned. "Sportsmen and women are human beings, we're not perfect, nor do we claim to be," says Becker, who has expressed sympathy for Woods. "I can empathise with high-profile people who find themselves in the spotlight in this way. I feel their pain, their embarrassment, so I wouldn't ever dare criticise anybody's private life." Are sportsmen like you more prone to straying, I ask. Becker, who described himself as "disciplined and a quick learner" returns with impressive speed. "No. It's just about opportunity. Do you know where your husband is right now? Can you be sure what he's doing?" "Yes, Boris," I bat back, triumphantly. "He's collecting the children, because you were six hours late..."
But Becker is on a winning streak and will not be deflected. I know he's winding me up rather than chatting me up, but it's quite funny, if not exactly what I'd planned for the past 26 years.

"Ah, maybe this afternoon, but where he is all the time? What about those 15 minutes between appointments, that's enough time for an affair!" No, Boris, it's enough time for sex in a closet. I would hazard - hope - that an affair would at least involve disrobing and maybe a post-coital smoke. But in Becker's universe, there's no time to hang about and he's already phoning his wife to suggest she come and meet him. Not us, him. Hmmph. Meanwhile, increasing numbers of people are coming up asking if they might have their photographs taken with Boris. No, I say, he's mine and he's busy. But they think I'm joking and he is charmingly obliging to them all. I realise that while I ought to have gone off him, I haven't. It's my cue to leave. And so I do. But not before noting with a tiny sigh of contentment, that my Number 1 seed and the sole strawberry blond in my life these days is my husband. As long as he's remembered to pick up the children.